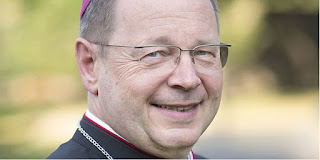 A Protestant pastor in training and a Catholic community administrator in training have made sex abuse allegations that the diocese has already classified as “credible”: Bätzing spoke out against the priest “formally reprimanding” him but promoted him anyway

Limburg (kath.net) The Bishop of Limburg, Georg Bätzing, appointed the man he had warned of molesting two women as regional dean.  The diocese confirmed both the allegations against the man and his promotion.  This was reported by the "Zeit" and the "Spiegel".  Bätzing had given the man a "formal reprimand".  Two women have accused the priest of both verbally and sexually harassing them.  According to "Zeit", the priest verbally and physically sexually harassed a female Protestant pastor who was still in training in 2000, and the diocese considers the allegations to be credible.  Another female parish administrator, who was also still in training, is said to have molested this pastor around 2006/2007”.  The reports of both women are the "Zeit" before.

Nevertheless, this priest was promoted to regional  dean – even AFTER the bishop had issued a “formal reprimand”.  The "Spiegel" cites from the justification by the press office of the diocese of Limburg: "Also because it was not a matter of criminal behavior, the pastor had insight and remorse and he had apologized to the community administrator for his behavior, the bishop then appointed him to the office of regional dean.”

Bishop Bätzing has been the President of the German Catholic Bishops' Conference (DBK) since March 2020.