Cardinal Sandoval’s Censored Video is Back

Cardinal Sandoval spoke a year ago in a video about the pandemic, Corona and plans for world domination.  The video was deleted, but now it's back.

(Mexico City) The censorship rage of the operators of the leading social networks does not stop at this cardinal.  A year ago, a video message from Cardinal Juan Sandoval Íñiguez, Archbishop Emeritus of Guadalajara in Mexico, fell victim to it.  On January 12, 2021, he commented on the so-called pandemic.  The video received a warning from Facebook and was deleted from the Cardinal's channel.  At that time, Katholisch.de also reported about it, the news portal of the German Bishops' Conference, without taking offense at the censorship.  The video is now available elsewhere.  How long?

“Professional examiners” had discovered that “untruths” were being spread in the video.  The transition of the Internet from a haven of freedom of expression to a desert of censorship began the day after the US presidential elections in 2016, when the ruling establishment was shocked to discover that Donald Trump had unexpectedly won the elections.  Since then, censorship has intensified rapidly and is becoming increasingly massive.  Unwelcome opinions are suppressed.  "Professional examiners" or "fact checkers" are put forward as justification, who usually check little and certainly do not stand up for "the truth", but are only the alibi for the censorship measures.  Information was yesterday.  Today is propaganda.

Katholisch.de gave the censors to understand that they also have the green light from the Church side, cardinal or not.  One must show "attitude", which is why the Church hierarchy, especially that of the German and Santa Marta, constantly reaffirms whose side they are on.  Of course, Katholisch.de did not publish the video, nor any link.

After more than a year, Cardinal Sandoval's video is available again, on YouTube.  It will not be tolerated there for long.  So far, however, it has not been noticed.

Many months before Cardinal Sandoval, in May 2020, a group of cardinals and bishops issued a warning with the appeal Veritas liberabit vos:

"There are powers that want to abuse Corona to seize world domination."

“These gentlemen determine how long the pandemic will last”

Cardinal Sandoval said right at the beginning of his video message that "these gentlemen" will determine how long the so-called pandemic will last, whether "one or two months", or whether "three, four, five, six years".  In the ears of Facebook and other BigTech global players, such a statement sounds like a “conspiracy theory”.  In reality, it can rely on well-known representatives of the establishment, most recently even on WHO Secretary-General Tedros Ghebreyesus.  He tweeted on February 18 from the Munich Security Conference:

“Pleased to join @MunSecConf today.  I was asked: when will the #COVID19 pandemic will end?  It will end when we choose to end it.  Because ultimately, it's not a matter of chance, it's a matter of choice."

In plain language, he said three days ago: "The pandemic will end when we choose to end it".

To clarify who is meant by “we”, Tedros Ghebreyesus sent a photo along with the text that shows him on stage next to Bill Gates at the Munich Security Conference.

Cardinal Sandoval speaks of a "hard, difficult time such as the history of mankind has never seen".  He calls Bill Gates a "threat".  This man is known to everyone "because he is a prophet who predicts the future".  It is the same with this corona pandemic.  What Gates says sounds like "magic," says the cardinal sarcastically, who then reveals that a laboratory in Atlanta, of which Gates is a "benefactor, sponsor," is researching smallpox, a disease that is considered to have long since been overcome.  Cardinal Sandoval links Gates' warnings of the next pandemic to his research into the smallpox virus.  An unequivocal indication that the cardinal believes the pandemic was artificially and intentionally created.

"What do these gentlemen want?"

The question is what "these gentlemen want," said the cardinal.  They are people who have "great power in the financial world", even if it is "very hidden".  The cardinal accuses this group of people of having “created this virus” “that is attacking many nations”.

“These gentlemen want world government, a new world order.  They only want one government, one army, one currency, one economy and one religion, which will certainly not be Christian.  It will be the religion of the earth, of mother earth, of man, of humanity, of universal brotherhood.”

And what are the pandemics for, asks the cardinal. 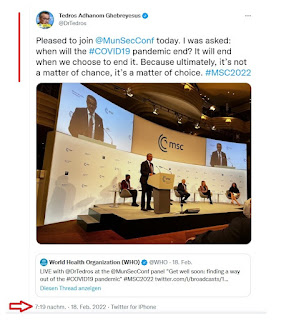 "To weaken the nations, impoverish the people, the economy is devastated, to weaken education through the closed educational institutions, to reduce religious practice, to prevent gatherings, etc."

Above all, great fear was spread among the population and "Fear makes you ill, the doctors know that".  Fear weakens the immune system and self-defense.

"They want to reduce the population because they say we are too many people on earth."

Therefore "5-6 billion" should be removed.  The question is whether they will achieve this:

"Will they make it?  Temporarily maybe.”

The struggle currently taking place in the United States is not between Biden and Trump, but "between those who want the new world order and those who stand up for the independence of this great nation".  With independence, “the US could do a lot of good to positively influence other nations as well.”

According to Cardinal Sandoval, he says this because there are "mysterious words" in divine revelation, in the Old and New Testaments, "that are now beginning to be fulfilled, for example Isaiah, chapter 20".

"Our Lord Jesus Christ spoke of a great tribulation, a difficult time."

The Lord will then come again and the question will be who he will still find on earth with faith.  However, those days would be cut short for the sake of the elect who will not apostatize.

“So there are mysterious statements in the Scriptures.  Apocalyptic literature is full of those mysterious things that you don't take seriously or understand until they happen."

The decisive factor is that "they can temporarily enforce the new world order, I cannot rule that out, but they will certainly not win".

“What is definitely certain is that Christ will win.  Our God definitely wins.  There is a very strong, mysterious, but very strong word of the Lord when he says about the Church:The  gates of Hell will not prevail against Her.

“Even if the whole world of these supporters of the new world order, which is anti-Christian, conspires, they will not succeed.  Our Lord Jesus Christ who is with us will triumph.  He said: I will be with you always, even until the end of time.  The Lord sees everything.  He looks down from the sky and laughs at the plans of these people, which he can destroy with a breath.”

“Dear brothers, dear sisters: do not be intimidated, do not be paralyzed by those who want to make the whole earth one huge flock, where a few shepherds, from very high positions, who are very hidden, but feel very sure that  they can tell us what to do and how to live.  But much higher than them, much mightier than them is our Lord Jesus Christ, King and Lord of ages, King of kings and Lord of lords.  Let's not live in fear of them.  We believe in God because we believe in Christ:

Our destiny is in Your hands and You will save us according to Your immeasurable goodness and mercy.

May the Blessed Virgin Our Lady of Guadalupe continue to protect us and we will have nothing to fear.”

Found an error in translation that changes the meaning substantially.
Article quotes Cardinal as saying: "She will not be able to overcome the gates of Hell.” when talking about the church but what he actually said was "the gates of her shall not prevail against her" ("Las puertas del infierno no prevaleceran contra ella") From video starting at 7m:10sec

I think you mean "the gates of HELL shall not prevail against her" This is what Christ said about His Church.