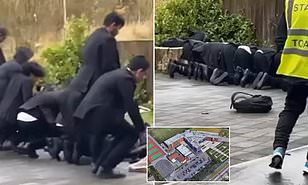 Edit: these invaders are eager to magnify the smallest grievances on behalf of their religion, but their sons often grow up to swell the ranks of the indigent and the cutthroat.
It was later revealed that the boys had to pray outside (Mohammedans pray outside all the time, and often in the streets to block traffic.), because the school room they wanted to use was flooded. Still, the school offered a groveling apology.
These people won’t even be satisfied once they’ve murdered all the Jews and Christians, then they’ll turn on each other with drawn knives.  Actually, they don’t need to wait for that, they routinely stab each other in pointless street battles as it is.
Thank your MP for this cultural enrichment today!
[Daily Mail] A school has issued a grovelling apology after footage showing Muslim students praying outside in the cold weather prompted outrage within the community.
The video showing male pupils at Oldham Academy North conducting their Jummah (Friday) prayers outside provoked a furious reaction on social media after it was claimed a female teacher had 'kicked them out of the classroom'.
In the clip, around eight boys can be clearly seen kneeling with their heads bowed on the pavement, while a member of the school's staff wearing a hi-visibility jacket appears to watch over them. After completing their prayer, the boys, still wearing their blazers and school shoes, quickly stand up and start picking up their school bags. The footage has been met with widespread anger, with furious viewers describing the scenes as 'distressing' and 'disgusting'.
AMDG
Posted by Tancred at 4:26 AM

Why is any consideration being given to these Infidels who were already kicked out of Europe 400+ years ago?
Remember the Battle of Lepanto!