Justo Gallego, a simple man from the Madrid area, built a large church in honor of Our Lady Mary out of gratitude for 60 years.

(Madrid) For almost 60 years of his life he built the “Cathedral” of Mejorada del Campo in honor of the Virgen del Pilar.  Justo Gallego Martinez died on the first Sunday of Advent at the age of 96.

For six decades this simple man worked hard to build a church from recycled materials on his property on the outskirts of Madrid.  To do this, he used bottles, paint cans, petrol cans that he collected, and other materials donated by private individuals and companies. 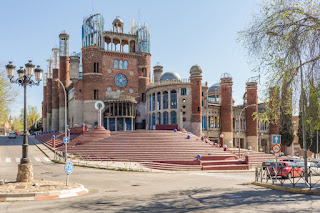 The "Cathedral" of Mejorada del Campo

Justo Gallego Martinez was born in Mejorada del Campo in 1925 as the son of a devout farming family.  He actually wanted to spend his life as a monk in a Trappist monastery.  However, tuberculosis forced him to give up his plan.  That same year, after leaving the monastery before taking his vows, he was miraculously healed.  Out of gratitude for this divine benevolence, he began with the realization of a gigantic building project, the construction of the “cathedral” in honor of the Blessed Mother.  In July 2016, Katholisches.info dedicated the article to him: “A man has been building a cathedral (almost) with his own hands for 50 years”.

Justo Gallego tackled the project even though he had no knowledge as either a builder or an architect.  He took action, driven by his believing heart and love for Mary, the Mother of God.  Over the years, the building project grew to such an extent that the media around the world became aware of the humble but headstrong Spaniard.  Even MoMA in New York dedicated an exhibition to his building project and him.

Despite his long life, he could no longer see the completion of the church.  Shortly before his death, he therefore donated the building to the Mensajeros de la Paz, the Messengers of Peace, who will endeavor to complete it.

“Stone by stone, he realized his dream, this cathedral that has managed to attract visitors and media from all over the world," said a press release from the town hall of Mejorada del Campo, which was broadcast on social media on Sunday.  Last April, the municipal council of the town of 23,000 made Justo Gallego an honorary citizen and now decreed a three-days of mourning.

The “cathedral” stands on a field belonging to Justo Gallego's family.  The construction area measures half a hectare and the building is 35 meters high.  Everything about her was designed by himself.  The church construction includes all the classic elements of a cathedral, a crypt, a cloister, a flight of stairs, colonnades and more.

The Mensajeros de la Paz, founded in Oviedo in 1962 by Ángel García Rodríguez, ordained a year earlier, look after the most vulnerable and destitute.  At the request of Justo Gallego, this non-profit Catholic association has set itself the goal of completing the church within the next two years.  The improvised approach and the speed with which Justo Gallego continued building step by step on his own cannot be continued by his successors.  After the donation, the Mesajeros have commissioned an architectural office to carry out a feasibility study for the completion.

Justo Gallego has started a work that can only be explained by faith.  On his own, without the necessary means, but endowed with holy simplicity, he has created something that is unique and amazes.

I feel embarrassed to say today I have faith, when here is a man who put that into action and over decades of his entire life. There's a man with faith. God surely rewarded him and he can see Our Lady with his own eyes. Splendid.

Beautiful cathedral. I hope it is used as Senor Gallego intended, as a church in honor of the Blessed Virgin Mary. Spain is no longer especially devout or even especially Catholic as it once was.....thanks to Vatican II and the progressivist lunatic bishops appointed by JPII and especially Francis.
The Gallego family would to well to sell/donate this magnificent church to the SSPX. That would safeguard it from Bergoglian style desecration. (Pachamama, etc. in the church).

Madman of the Cathedral
https://www.rt.com/shows/documentary/366204-spain-pure-faith-cathedral/