From a Catholic woman:

The two-year World Synod on the Synodal Church has begun.  It should be a time of “encounter, listening and reflection”, the Pope said at the opening.  The central ideas of community, participation and mission are in the room or verbatim on a lot of paper, the Roman preparatory document and the Vademecum, the guide for the 'Synod of Listening'.  Who would not agree that dialogue and listening are good for a fruitful togetherness on a common path in the Church? 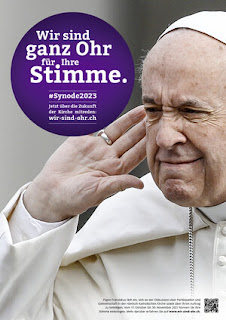 The dioceses of Basel, Chur and St. Gallen are all ears

But if you are still in shock over the Pope's latest motu proprio, you are wondering whether there is an inner connection between the two events.  After all, the Catholics of tradition should also be able to listen and understand.  So were they collectively under suspicion of schism in good time and the restricted to the old Mass?

In Germany in particular, Catholics loyal to the teaching office are shaped by their experiences with the so-called “Synodal Way”.  Talk of a synodal Church makes one suspicious, especially since the Roman synodal documents deliberately leave room for interpretation.  Too much dreams and creativity, innovative thinking and a Church under the signs of the times in the third millennium.  Skepticism is appropriate about such a mammoth project and its openness.  Will the much-invoked Holy Spirit "who speaks through the people of God" (Vademecum, p. 12) judge it?  Will one want to admit the one revealed truth unadulterated, although that is inconvenient and resists the ideology of contemporary cosmopolitanism and political appropriation?  Every renewal of the one Catholic Church and every evangelization must start from this truth and remain in it.  Also and especially synodal processes.  How should we understand it when “no one - regardless of their faith - should be excluded when it comes to expressing their views and experiences, insofar as this is done with the intention of seeking the Church on her synodal path  to support according to the truth ”(Vademecum, p. 13)?

So it is difficult to hope that this synod will offer a corrective to German special way [basically, ignoring Rome on Abortion, birth control and sodomy] on the level of the universal Church and can contain them, especially since the unofficially official website of the DBK sums it up:

“The German dioceses have chosen different ways to involve Catholics in the synodal process.  The time is extremely short, because by the end of the year the dioceses should prepare a document of no more than ten pages and forward it to the German Bishops' Conference, in which the respective experiences and ideas of synodality are to be described.  Many dioceses therefore fall back on existing synodal structures."

How much German “Synodal Way” will be reflected here?  Various statements and opening sermons for the Synod do not suggest anything good:

"At the opening, the Pope said that he would not want a different church, but a church that is different," said Bishop Bode.  “We are happy to take the path there at the level of the universal Church.  For almost two years we have been intensively involved in the Synodal Way at the federal level and also at the level of our diocese.  We will contribute our experience from these processes to the world synod that is now beginning. "

Except. Wolfgang Haas, Archbishop of Vaduz in the Principality of Liechtenstein, refrains from participating not only because of the small size of his diocese, but also because he sees the danger of ideological delusion.

"I am of the opinion that in our little archdiocese, for good reasons, we can refrain from carrying out such a complex and sometimes even complicated procedure, which in our part of the world runs the risk of becoming ideologically branched."

He refers to the “close relationships” in just ten parishes, which make quick communication and “spiritual and spiritual exchange” between pastors and lay people possible at any time.

The reform-oriented association for an open church immediately and vehemently criticized the non-participation in the synod and accused the bishop of lying:

“What has a completely new quality is that the Archbishop of Vaduz also publicly rejects the Synodal Process.  He is openly opposed to Pope Francis.  This letter is probably not only addressed to the Church in Liechtenstein, but seeks approval far beyond that - in the circles close to Wolfgang Haas (FSSP etc.).  That the church dialogue in our small country works anyway is a naked lie.  The people experience the clergy here as not very willing to talk.”

And here we come full circle.  Archbishop Haas is connected to the old Mass, which had a home in his diocese up to Traditionis Custodes in parish churches.  It is Dr.  Günther Boss, the theological advisor of the Association for an Open Church, who was a thorn in the side, and so he had already greeted the appearance of Traditionis Custodes with malicious glee towards Archbishop Haas:

“Bravo Pope Francis!  […] This affects the EBVaduz directly, as one indulges in the so-called Tridentine liturgy again in several parish churches.  [...] As I interpret it, from now on no more masses may be celebrated in the old form in the parish churches of Eschen, Triesenberg etc., because it is no longer allowed in parish churches.  Exceptions can only be given by the bishop, but not for parish churches!  But now I am curious whether one not only talks about obedience all the time, but also being obedient once in a while. "

But even without a synodal program: What Archbishop Haas writes about the Holy Spirit and the Church in his pastoral letter, which is highly recommended for reading this year, gives faithful Catholics stability and security in uncertain times:

“The Church's magisterial mouth always speaks clearly and unambiguously when it surrenders entirely to the voice of the Holy Spirit.  If he does not do this, i.e. speaks with ambiguity or a lack of clarity and thus expresses himself in an obscure manner, then he has let himself be guided by other voices that are not of the Holy Spirit.  Knowing the Christian truth of salvation, its authentic interpretation and its responsible communication, because it is linearly and continuously guided by the Holy Spirit, not 'volatile' behavior and are not subject to any kind of mutations."

Are we not followers of Jesus the Christ? This guy is the ultimate "pied piper". In Argentina, he had his own secret intelligence service. This is why Vigano went into hiding.

This is all so sick! God the Father told us about HIS SON :"...LISTEN TO HIM..." So, why we are turning our beliefs upside down? I do not want to listen to sinners like me, I just want to listen to Jesus - and ONLY HIM... The rest comes from Hell!