The fact that these "vaccines" are abortion tainted obviously didn't bother him. 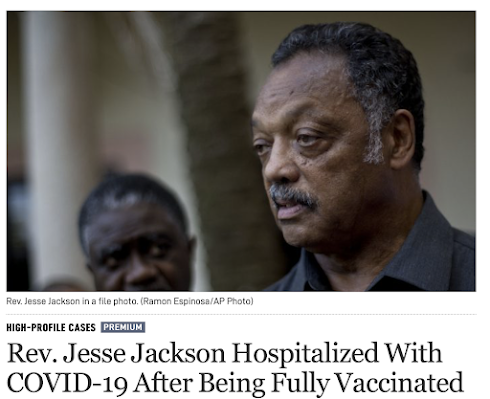 Civil rights leader Rev. Jesse Jackson—who is fully vaccinated—and his wife, Jacqueline Jackson, were both hospitalized with COVID-19, according to a statement on Saturday.

Jesse Jackson, 79, received his first dose of a COVID-19 vaccine in January 2021 during a publicized event and urged others to get the vaccine as soon as possible. It’s not clear if his wife, who is 77, also got the vaccine.

Both are being treated at Northwestern Memorial Hospital in Chicago, according to a statement from Jackson’s nonprofit, the Rainbow/PUSH Coalition. It did not provide an update on their status.

“There are no further updates at this time,” the statement said. “We will provide updates as they become available.”

Doctors, the group said, are “currently monitoring the condition of both” and added that “anyone who has been around either of them for the last five or six days should follow” guidelines from the U.S. Centers for Disease Control and Prevention (CDC) around testing and social distancing.

COVID-19 is the disease caused by the CCP (Chinese Communist Party) virus.

Earlier this year, Jackson underwent surgery after being hospitalized for abdominal pain. In 2017, he was diagnosed with Parkinson’s disease, a neurological disorder.

As Jackson was fully vaccinated, his hospitalization is sure to trigger more questions about the vaccines’ efficacy in light of new COVID-19 variants. Last week, CDC Director Rochelle Walensky said during a news conference there is “concerning evidence” that mRNA vaccine protection is “waning” against the so-called Delta strain.

In one study published by the CDC and cited by Walensky, the efficacy against infection has plummeted to 53.1 percent for both the Pfizer and Moderna vaccines. As a result, Walensky said that due to the waning effectiveness, the federal government is “planning for Americans to receive booster shots starting next month,” saying that their initiative is designed to “stay ahead of this virus.”

But the push to provide booster shots drew significant criticism from the World Health Organization, which said the plan would deprive poorer nations of vaccines. Some scientists and medical researchers who were previously vaccinated wrote on Twitter that they wouldn’t get the booster in light of the CDC announcement.

Earlier this month, one of the chief AstraZeneca vaccine developers, professor Andrew Pollard, said that gaining herd immunity with vaccines is “not a possibility” and that researchers and governments need to instead pivot to treatment methods.

Speaking to the UK Parliament, Pollard said that what the CCP virus “will throw up next is a variant which is perhaps even better at transmitting in vaccinated populations,” adding that it is “even more of a reason not to be making a vaccine program around herd immunity.”

The Epoch Times has contacted the Rainbow/PUSH Coalition for additional comment.

Jack Phillips
SENIOR REPORTER
Jack Phillips is a reporter at The Epoch Times based in New York.
Story also at NewsMax.
When will Faux News pick it up?
Posted by Stop Voris at 1:23 PM

Since when has Jesse Jackson been against abortion?
He has been on record as pro-abortion for years.

He was pro-life for years.

Al Gore was also pro-Life. Bob Dornan used to caucus with him.

Jesse was also opposed to illegal immigration as it made it harder for blacks to find jobs when they got out of jail. Then he got the memo from the DNC: be pro-Choice and pro Wetback.


He was on the J** team of Friedan, Steinem, and Abzug back in the 1970's. I distinctly remember.
(The team that never met a baby they didn't want to kill and were quite open about it).
As late as 2019 he was blathering on about in a piece on "Live Action" about making abortion "safe" for women.

Lots of Dems we pro Life initially. Many of the ethnic Catholics and blacks.
JFK was proLife. Nixon proAbortion.

Unless this kills him (and they can’t blame it on something else) they’ll say it would’ve been worse if he hadn’t been vaccinated.
Or maybe, he should’ve got his booster sooner.