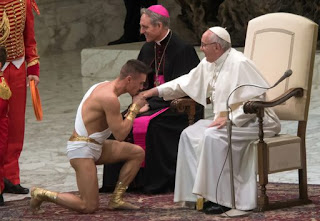 Edit:  Does anyone think any of these catamites arrayed in their immodest outfits, as if for a triumphalisticn rainbow parade, have any intention to amend their lives? Did the sinful woman come to Christ proudly attired as a prostitute with no intention to reform her life? It looks like they're agitating for Globohomo to us.

Francis sent a Vatican ambulance to provide the prostitutes with free Covid-19 tests and free flu vaccinations.This initiative was initiated by the local parish-priest, Father Andrea Conocchia who complained with the papal almoner, Cardinal Krajewski, that the prostitutes could "no longer work" and were living in fear because they didn't know whether the "few remaining customers" were healthy.In August 2016, Francis wrote in a prologue of a book by Father Aldo Buonaiuto that prostitution is a "horrendous crime" and that "any form of prostitution is a reduction to slavery, a criminal act, a disgusting vice that confuses making love with venting out one's instincts."In April 2020, Francis offered money to the Torvaianica prostitutes.
Posted by Tancred at 12:57 PM

Did this guy receive these perverts recently, like this week? Or is this a report from months ago, because I read that he gave them money, but no mentioned that he received them in an audience. Sending money to them is objectionable in itself, but to receive them in audience is outrageous. He's either nuts, or truly evil. In either case, he should be forced out.

I posted a pic for your ehem, "illumination" Damien.

THank you. I did read an article from weeks ago over the summer that he had come to the aid of these type of people with money handed to "cardinal" Krajewski for distribution. That was weeks ago, so I thought it was just a repeat of the same article. If more recent-like this WED.- is what this picture represents (rather than just circus performance, etc which occasionally is hosted at an audience), then Bergoglio is lower than even I thought....and I've never posted positively about the guy.

He, and people like homo Cardinal Wilton (Communon for Biden) Gregory make me ashamed to be a Catholic. My cousins in India now go to the Syro-Eastern Orthodox Church in Kolkatta (really small in India, but apparently many more dotted around the Middle East. My family in India (my Dad's) have been Catholic since the end of the 18th century, and one of our relatives (I never met him), was a cardinal created by the great Pope Pius XII, but now, out of 24 families in India (aunts,uncles, cousins and their individual families etc ), 3 are now Syro-Orthodox, 1 is SSPX, and one is Protestant (a la Jimmy Swaggart/Bible Christians).THey all switched over the last 50 years due to the usuall reasons...Vatican II, changes, etc. The Bible Christian family, switched last year because specifically due to Francis. The Bible Christian preacher told them that Francis isn't even really a Christian....and be probably isn't.

I included this link. I knew I was right. This pix is just from an acrobatic troupe that did a routine for the Pope during the regular General Audience. They were not trans perverts at all. I knew I had seen these kind of circus-acrobat shows before at the Vatican. That's what this photo was from.
I don't take back what I posted about Francis giving money to trans perverts in April....but these were not the same type.

Usually Pope Bergoglio harshly declines letting the faithfuls to kiss his pontifical ring.
On the picture the Pope diplays a wide smile showing how much he is pleased having his hand kissed by a trans prostitute.

Isn't that a picture from that gay carnival thing? I don't think the guy kissing his ring is a tranny, but probably is a homo.

In response to "Jack", you are not the only one who noticed the emotional response from the Argentinian in the photo. To "Jacek Kowakaki", at least Damien wears underwear. "Semper Ubi Sub Ubi".

The people from the circus in the photo are not transsexuals and I suspect the writer knows this. By I guess grifters need some made up nonsense to float their boat.

The more the years and decades and centuries pass, the more history is bearing out that the Roman Church has gone off the deep end ever since it broke away from the Orthodox in 1054ad. Roman Catholicism and Protestantism are two sides of the same tragic coin.

And the “Orthodox” are so sane.