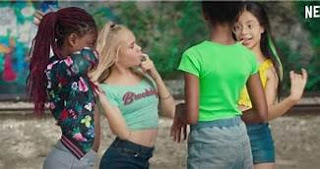 Edit: Avenirre is the official mouthpiece of the Italian Bishops' Conference.  They saw fit to write a rather spirited defense of pedo film, Cuties.  Like Marx Shea, they're enthusiastic about it, although they don't attack detractors of the film on the basis of their political alignment, taking an ideological position, as Marx Shea does. It's almost as if all these talking heads are reading and writing from scripts.

Interestingly enough, what this apologia for Cuties won't tell you is that the woman who directed the film is a mere figurehead.  The real director is a Jewish pedophile who has been campaigning since the 70s for such media.  I'm in the process of discovering his name and some of the details about his "work", but this film is clearly intended to justify certain things and it's unsurprising to see the Italian Bishops' Conference, which is made up of the kinds of men who enjoy certain fare and style themselves as post-modern intellectuals, defending this piece of excrement.

You people should be ashamed of yourselves for cancelling your Netflix subscriptions!  Listen to your betters!

[Avenirre] Users who were outraged at Netflix by launching a sabotage campaign against the online platform for the film Mignonnes, known by the international title Cuties, either have not seen it or have really limited themselves to the poster.  Otherwise they have not understood it or have looked at it with the wrong eyes.  The film by the Franco-Senegalese director Maïmouna Doucouré does not revolve around a "scandalous sexualization of adolescents" nor obviously "encourages pedophilia", as some of the more than 600,000 signatories of a petition against the giant in the distribution of films and  tv series via internet.  However, as Massimo Calvi pointed out on Sunday in a comment on 'Avvenire'

the suspicion is that the work was promoted by Netflix by playing ambiguously on some specific content.  Mignonnes is indeed a tough film, very tough.  It is an insight into a reality, that of 11-12 year olds that even parents sometimes do not realize or do not want to realize.  A reflection inserted in a much more complex context through the story of Amy, an eleven-year-old native of Senegal, who lives with her mother, aunt and brother in a suburb of Paris awaiting the return of her father who, in the meantime, has become  polygamist marrying another woman.

Amy witnesses her mother's suffering and herself suffers from the absence of her father and from the strict rules imposed by the Islamic religion and family traditions.  She finds it difficult to fit into the school environment and in relationships with her peers, until she becomes friends with Angelica, a neighbor who is part of a modern dance group made up of four girls.  Amy will become the leader pushing the group towards an ever more daring dance.  And here lies the controversial point because the director absolutely does not force her hand on the sensual aspect, on the contrary: she tries to highlight, albeit in a contradictory picture, their innocence, the fact that they are little girls (one is ugly, one is  fat, one has pimples ...) who do things out of their reach, which never manage to get to the extreme.

They talk, even in foul language, but then show that they know nothing about sex or that they care if they are considered wrong.  Moreover, Amy finds herself in the middle of two completely different cultures, undergoing very strong opposing pressures in a particularly complicated moment of life such as the transition from childhood to adolescence.  She even senses a contrast to the ideal of female beauty.  For Amy, everything she does, without being fully aware of it, is a form of redemption towards her family, her culture and towards those who discriminate against her for forms of racism or bullying.  However, she is always terribly fought, until the beautiful finale in which, with the game of jumping rope, she rediscovers herself for what she is: still a child.

The problem, therefore, is not these kids who grow up too fast for certain things without having sufficient maturity or the necessary immune defenses.  [That makes them perfect prey for men, or women who do such things.] The problem is the world that we have created around it, with absent parents (all the girls have complicated families behind them), with social networks that push you to believe that you exist and that you are someone only for the number of likes you receive, with the  ease with which he can access forms (in that case yes) of wrong sexuality on the internet and with the mobile phone which becomes the only means to create equality.  All this the director makes it clear, even if the film cannot be fed to everyone.  But when read correctly and presented well, Mignonnes can become an educational film. [Or a film subtly endorsing pedophilia and sex between adults and children.]

JMJ+ I am finding it very hard to keep my rolling stomach under control. Exploitation of children, male or female, is of such a dark sinfulness that even Satan should blush, but no, he'll cheer it on like every other abuse we are being subjected to today. Anarchy, has no sense of morality! And, yet, we are being fed this poisoned apple from many in extremely high ranking position that actually DO know better, but do not care. Guard yourselves and your children from the wolves and rabid dogs in the world. Pray more to the Lord, Jesus Christ and His Blessed Mother, and all of God's Angels and Saints. Do more to shut these atrocities down. We can stop this blaspheme!

I just keep asking myself at what point Bergoglio understands what he is doing. To what point can one look like he understand, without it being "officially" out if the closet? When does plain "stupid" cross the line and become "malicious"?The Italian Episcopal Conference was more conservative, until he appointed his sympathizers in.

Peter Comestor said...
This comment has been removed by a blog administrator.
September 18, 2020 at 5:18 PM

Pico Della Mirandola said...
This comment has been removed by a blog administrator.
September 18, 2020 at 8:22 PM

Pico Della Mirandola said...
This comment has been removed by a blog administrator.
September 19, 2020 at 12:08 AM

Pico Della Mirandola said...
This comment has been removed by a blog administrator.
September 19, 2020 at 3:12 AM