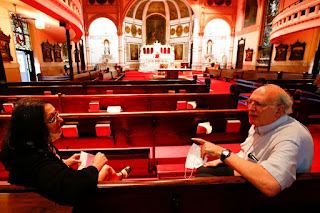 Edit: it looks like they tried to make the interior of the church extremely gay by covering up the marble floor and pushing the altar out of the sanctuary and removing the communion rails.  I didn’t realize Neo-Cat was interested in Gathering Spaces.
The parishioners hated the changes which were accomplished without them being informed, much less their approval.
I guess the Neo-Cats, who the parishioners claim are more interested in their cult group than in taking care of the parish, have met their match and will have to repair the uglification of this historic black church.
[Philadelphia Inquirer] Promised restorations to an Olde Kensington church, which was altered during its coronavirus shutdown without the consent of its parishioners, will have to wait until the sale of another church to pay for them, an Archdiocese representative told church members Sunday.

The Rev. Dennis Gill, director of the Office for Divine Worship for the Archdiocese, told parishioners of St. Michael Roman Catholic Church that its original plan to move artifacts from Immaculate Conception, which closed last year, to replace what their parochial administrator, the Rev. Arturo Chagala, removed, was cost prohibitive.

Instead, Gill said, the parish would first have to sell Immaculate Conception in Northern Liberties, and then move religious artifacts to St. Michael.

Donna Panno, whose family has been at St. Michael for four generations, said Gill made the five-minute announcement and left the church before the 9:30 Mass began.
Photo: YONG KIM / STAFF PHOTOGRAPHER InquiRer

Has Mr. Palmo said anything about this? The golden child of the Church in Philly ought to be able to give us the scoop on why this was allowed.