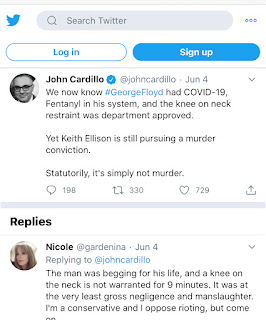 I am curious, how did Mr Floyd end up on the ground? When was he handcuffed? Does anyone know? What was the sequence of events? Certainly somewhere somebody knows.

If you watch the original TMZ video you'll see the start of the physical altercation when Floyd dropped to the ground between the two officers.

The media isn't interested in showing the coked-up, highly inured to pain, multiple felon struggling with the cops successfully to prevent him being stuffed in the car.

I believe he was hoping to get off on his counterfeiting charge with a substantial payout for being the victim of "police brutality" and didn't anticipate his heart failing from all the fentanyl he was on.

Yea, I guess the media left a few things out. They never use that word allegedly, he was murdered not died. The word investigation isn’t used much. It’s not mentioned that Black Lives Matter is a political organization and not a phrase. No support for the police unions from AFLCIO either. Burning down buildings and looting and assault isn’t rioting, it’s the new political rally. #FARCE

Overcharging increases the likelihood of acquittal, thus sparking another round of looting and burning.