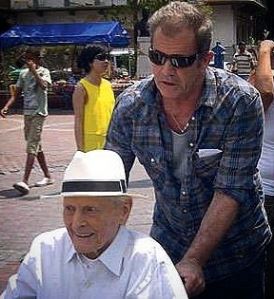 May he rest in peace.

Lord rest Hutton in peace in the Heavenly Kingdom. Deep sympathy to all the family. With gratitude for Hutton's paving some of the paths which we have been following. Please God these diverse paths will unite at the foot of the Throne of God.
Treasa. Australia.

May he rest in peace

No doubt his influence and witness to his son is part of the reason the world has the best movie and mystical-prayer aid ever made...The Passion of the Christ. I personally owe him a great debt for that, and will include him in intentions of my Rosaries this week.
Eternal rest please grant unto him O Lord, and let perpetual Light shine upon him.

The faux priest of Traditio...

Thank you.
No one has any idea who
"Ordained" "Fr" Morrison.
I've read the story about the Lutheran church ordeal but even that account is unsubstantiated.
1 Thuc line Bishop I knew in the
Des Lauriers line said an
Old Catholic Bishop from the
Utrecht line conditionally ordained him from what he had been told.
He had no idea if it was true & didn't know what to believe.
Andrew