Edit: Opus Dei can always deny knowledge of Voris since they don’t have any direct contact with them, as is usual. It’s all so cloak and dagger with them.


[Gabriel Sieben] Before I start – I am not a theologian, a book writer, a YouTube commentator, or anyone special within the Catholic media sphere. However, if you have been following traditional Catholic media for a while, you will almost certainly seen arguments about the SSPX, their legitimacy, and its various (supposed) scandals. The disagreement has divided many popular “Trad Inc.” commentators, and there are now questions as to whether those fermenting the divide have financial interests. Here’s a quick recap: 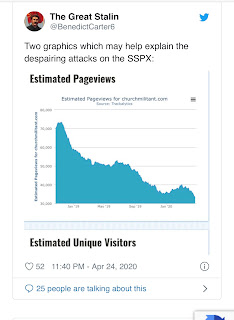 Edit: another piece of information from Voris not-so-past and Ryan

There are a lot of sick puppies at CMTV
https://tinyurl.com/ooa4g97


Matthew 17 [15] Lord, have mercy on my son: for he is lunatick, and sore vexed: for ofttimes he falleth into the fire, and oft into the water.

Revelation 17 [15] And he saith unto me, The waters which thou sawest, where the whore sitteth, are peoples, and multitudes, and nations, and tongues. [16] And the ten horns which thou sawest upon the beast, these shall hate the whore, and shall make her desolate and naked, and shall eat her flesh, and burn her with fire.

What is the difference between FSSP and SSPX. FSSP came *from* SSPX. Many, many similarities. A few crucial differences. What makes the one true and the other false, in your opinion?

Really interested to hear your answer to that one.

Some people have no respect for the ordinary Magisterium.

I would still be interested to know his answer to that question. I really doubt he serves at an FSSP Mass, but still, he raised the point.

I have been FSSP for many years. I know it well. I have come to know the SSPX within the past year. My understanding is that those differences between FSSP - SSPX are at the nut of what ails the Catholic Church militant. The dilemma that faced Arbp LeFebvre is the dilemma of us all.

He answered the question, bravely, honestly, with his soul on the line. No one should think any of us living can avoid the same dilemma and ultimate eternal choice. Something happened in 1965 and beyond. We can’t pretend it didn’t. We can’t ignore it as if it wasn’t at the core of our Faith - that, too, is a choice.

We must be brave, and honest, like Arbp. LeFebvre and answer the question of the Second Vatican Council and all its subsequent Constitutions and with that answer it must guide our firm belief to its logical conclusion - whichever answer you give.

And that is why I have come to the conclusion that FSSP, as good as they are, has a fatal flaw at its foundation. They answered that question incorrectly. It is why they exist. And when “Pope” Francis abrogates Summorum Pontificum and then demands all Bishops and Priests in union with him celebrate the Novus Ordo of the Amazonian Clown Mass Versus Populum ... FSSP, who fully accepts II Vatican Council in ALL of its particulars and fully accepts the New Order of Mass in all of its particulars will be forced to comply. Logical Conclusion.

The major difference between SSPX and fssp is that SSPX teaches as infallible that Religious Liberty is for the Catholic Church only. The fssp teaches the Social Reign of Christ in the State affairs and Constitutions are a matter of personal interpretation.

Constantine: That is just not true.

From Arbp LeFebvre’s book, “They Have Uncrowned Him”:

As with everything SSPX, it is carefully sourced in the Magisterium. And it is not as you say at all.

And this - the errors of liberalism, of which all Western countries are presently afflicted”:

The FSSP’s problem is essential this:

Constantine: I misinterpreted what you said by not considering your words carefully enough. You meant the opposite of what I first though (I believe). I apologize

Whoopsie! The dam is breaking........ The creepy SSPX is facing still MORE information

Looks like when Lefebvre ordained priests in 1988 he lied about having apostolic permission to do the ordination....... it’s on the latest Vortex video out today

Voris doesn’t look well. At all. I think information about his own sordid past is starting to breach its own dam. It doesn’t look good for him.

Most people are well aware of fake news campaigns and the political motivations behind them by now. Faithful Catholics receiving the Sacraments at SSPX missionary chapels around the world, the *only ones* still receiving Christ in a world turned dark by this antipope, compare the bravery of their faithful Priests to the viscous campaign against them by this strange Church Militant group led by a very strange man with a very unusual personal past, and make our own appropriate judgements.

I am not persuaded by this weird video. At all.

At our little Chapel we have people driving hundreds of miles to attend Catholic Mass. And the Novus Church just can’t deal with that.

Amen! Deo Gratias for the SSPX

It is weird that so many catholics rely on the false accusations promulgated by the 'lawyer-media axis of evil, SNAP

Mr. Voris outed his own self when he became aware that someone in the Archdiocese of New York was going to go public with information about his sordid sodomitic past.

Now that he beat to the punch those who were going to expose him, he claims he is now forgiven and he and Niles are free to threaten others that if they do not do what CM say they must do, they will be destroyed.