The Man Who Gave Us the Angelus Missal

Edit: a translation we completed, later revised by the author and his assistant. Special thinks to him for allowing us this honor. We’ll try to translated all of his contributions. They’re truly excellent and humorous too. 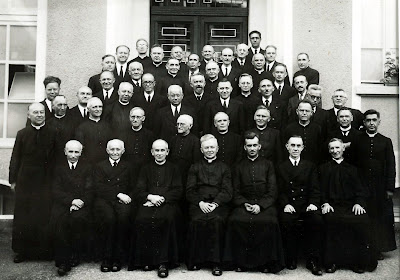 Marianist and Priestly Formation
After his novitiate in 1910 and 1911, Sylvester P. Juergens made his first vows on September 17, 1911, the feast of the Stigmatization of St. Francis of Assisi. This is followed by the scholasticate until 1913. On the feast of St. Dominic, to whom the Blessed Mother had revealed the prayer of the Rosary, on 4 August, 1916, Sylvester P. Juergens took his perpetual vows, receiving the golden ring of loyality characteristic of the Marianists, a privilege granted to the religious community in 1851 by the Holy See. Attached to this is a special fourth vow of dedication to the Blessed Mother.
He then worked as a Marianist’s brother in the teaching profession at various schools in his Congregation in the United States until 1922. After that period of time he was sent to Switzerland to prepare for ordination at the International Marianists’ Seminary in Friborg on April 2, 1927, Saturday of Sitientes before Passion Sunday, a classic ordination date, which he received in the Freiburg Cathedral of St. Nicholas. The diocesan bishop Marius Besson (1876-1945), together with Juergens, bestowed the Sacrament of Holy Orders to a total of six Marianists, two Frenchmen and three other Americans, that day.
The certificates from the years in Friborg are first class. They show that Juergens not only succeeded in philosophical and theological studies, but manifested a charming character, exemplary in natural and supernatural virtues and in piety and zeal, especially in the veneration of the Most Blessed Virgin. His intelligence and energy as well as a literary talent are emphasized. He acquired his theological doctoral degree in 1925 in Friborg with a dissertation on the psychology of faith of the individual with John Henry Newman, which appeared in 1928 as a book. After John Henry Newman was canonized on October 13, 2019, it might be appealing to re-read Sylvester P. Juergens’s PhD thesis and possibly reissue it. Juergens was particularly influenced by the rector during that time in Friborg, the Alsatian Marianist Father Emile Neubert (1878-1967), some of whose writings on Marian spirituality were translated by Juergens into English.
Sylvester Juergens’ first publication is a booklet aimed at First Communion children, Friend of Children. A First Communion Prayer-Book, published as early as 1926.
Back in the United States
Returned to the United States in late 1927 as a newly-ordained priest, Father Sylvester P. Juergens was entrusted with the formation of postulants and the building of the postulate in Maryhurst, Kirkwood, Missouri. For the use of the postulants, he wrote a Particular Examen (Examination of Conscience) and was greatly appreciated for his lectures. In 1931 he was appointed director of Chaminade College in Clayton, Missouri. In this position, he proved to be an outstanding youth pastor and held retreats with great success. This was also the beginning of his work with layman’s missals, first publishing the Daily Missal and Liturgical Manual with Vespers for Sundays and Feasts, but perhaps referring to a precursor book, as it only indicates it was revised by Father Sylvester P. Juergens, SM , STD.
On July 30, 1936, Father Juergens took over the leadership of one of the then four American provinces of his order, based in Saint Louis, Missouri. He was then provincial for ten years, a period of immense development and expansion. As early as 1935, he published his first English translation of his teacher, Father Emile Neubert, entitled, My Ideal Jesus, Son of Mary.
As a result of his preaching and retreat activities, Fundamental Talks on Purity for the Use of Priests and Nuns appeared in 1941. 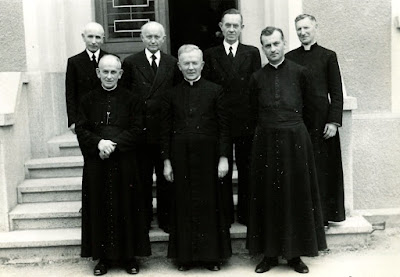 Back in Friborg—the General Chapter of 1946
In 1946 the first General Chapter of the Marianists took place after the end of World-War II, in Friborg. It is no surprise to anyone when the capitulators elect Father Sylvester P. Juergens as the new Superior General, who bears the beautiful title, Bon Père, in the Congregation, the Good Father, which is nowadays, apparently, no longer used. Juergens devoted himself to this work for the next ten years, until 1956. He continued the development work he did as a provincial in America, this time on a worldwide level. Juergens relocated the Generalate of Nivelles in Belgium to Rome, where it still is today. Switzerland, Japan, Italy, Spain and the Pacific were being established as new provinces; the two French provinces of France were united into one; missions in Chile and the Congo, first houses in Canada and Peru, were founded.
In 1849 the first Marianists came to the USA; in 1948, the Superior General called the first Marianist sisters, the Daughters of Mary Immaculate, founded even before the brethren and priests, to the United States.
In 1947, the first edition of the New Marian Missal was published. 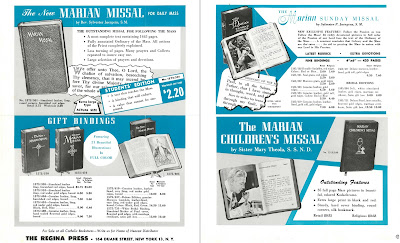 Final years and death
After completing his term as Bon Père, he returned from Rome to America in 1956 and resided at the Chaminade College Preparatory School in Saint Louis, Missouri, without, however, really retiring. Juergens remained active as a teacher, chaplain, confessor and counselor to many religous sisters and continued to translate Emile Neubert: Life in Union with Mary(1959), Our Gift from God (1962), and The Soul of Jesus(1963). 1962 also witnessed Father Juergens’ most mature layman’s book, An Ideal Missal, which is the basis and starting point of today’s Catholic Daily Missal, the Latin-English Missal of Angelus Press.
Dying from colon cancer, Father Juergens had received the Sacrament of the Extreme Unction on the Feast of the Holy Guardian Angels, on October 2, 1969. Since the Feast of Maternity of Mary, October 11, every two or three days the Holy Mass was said in his room in the hospital. He proclaimed to his fellow-brothers that he would spare his strength in order to be able to concentrate on the holy Masses and assist with devotion. He was filled with inner peace and longed for the death he foretold for All Saints’ Day. The chronicler of the province allowed himself the somewhat macabre remark that this was not the only unfulfilled prophecy of Father Sylvester P. Juergens. Father Juergens died on Friday, November 21, 1969, the Feast of the Presentation, at 1:25 am.
The obituaries that appeared after the death of Father Juergens are strikingly similar to those of the German Dom Anselm Schott OSB (1843-1896), in the sense that his missals, which occupied so much of his time and effort, are neither unmentioned or barely mentioned. There was a sense that in the wake of the post-Conciliar liturgical reform they were definitely outdated. Unlike many other missals for the laity, Latin remained intact until the final edition of 1967, revealing a decidedly conservative interpretation of the first steps of the liturgical reform. How, of course, Juergens himself would have viewed the Novus Ordo Missae of Paul VI remains a matter of speculation, since he was already too ill to be in a position to comment on it. The evidence suggests that enthusiasm for it would have been unlikely.
Father Juergens was laid to rest in the Maryhurst Marianist Cemetery, in Kirkwood, Missouri. 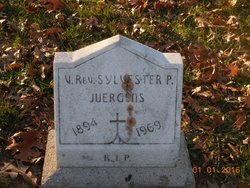 Given this story with a somewhat sad ending, it is remarkable that the Angelus Missal, based on Father Juergens’ work, is currently in its eighth edition, an anniversary edition for 2019.
In addition to Juergen’s writings and translations of Neubert, all of his missals remain available on the American book market.
When the Motu proprio Summorum Pontificum appeared in 2007, Baronius Press came out with Juergen’s Daily Missal and Liturgical Manual, and the New Marian Missal is available in various unaltered reprints.
As far as print quality and bookbinding are concerned, Angelus Press’s Catholic Daily Missal outperforms everything else. The fiftieth anniversary of the founding of the Society of St. Pius X in Friborg is the occasion for the eighth edition of this Missal, in which Juergens’ Ideal Missal lives on. To celebrate this anniversary, it is also offered again in a real leather cover. The Angelus Missal is not a simple reprint. You have the introductions, for example, on the basis of the book The Mass of St. Pius V by Dominican Father Bernard-Marie de Chivre (1902-1984) and dogmatic-liturgical-ascetic statements of Nicholas Gihr (1839-1924).
Nevertheless, it remains unmistakably a work of Father Sylvester P. Juergens—not least of all because it records the Marianist form of the Mass of Our Lady of the Pillar on October 12th. The preamble mentions the special relationship of the founder of the Order, Guillaume-Joseph Chaminade, to this image of grace. This introduction should be updated at the earliest opportunity to refer to Chaminade as Blessed, a beatification that took place on September 3, 2000, which is, according to the traditional calendar of saints, the Feast of St. Pius X—another subtle connection between the Marianists and the Society of Saint Pius X; between Juergens’ Ideal Missaland the Roman Catholic Daily Missal by Angelus Press.
Thus, the eighth edition should not be regarded only as a commemoration of the anniversary of fifty years of the Society of St. Pius X in 2019, but should also keep alive the memory of a priest who died fifty years ago and without whom the Angelus Missal would not exist today.
Posted by Tancred at 9:50 AM

Very nice to have a missal in genuine leather again.

The Marianists have a great history. Sadly, the modern version is filled with turmoil just like the rest of the Church.