"I don't like what you did in front of me," Macron yelled in English at a policeman who had stood up in front of him. "This is France and everyone knows the rules," Macron emphasized. "Please go away, provocations are unnecessary, is that clear?" Added the head of state.

The Catholic Church of St. Anne has been part of the French territory since the Ottoman Empire ceded the basilica in 1856 to the then Emperor Napoleon III. It is subordinate to a French order today.

The incident commemorates a dispute by former President Jacques Chirac during a visit to Jerusalem in 1996. "Do you want me to go back to my plane?" Chirac demanded at the time, to Israeli security forces. Like Macron, he spoke of a “provocation”. Chirac was also initially not admitted to the St. Anna Church. 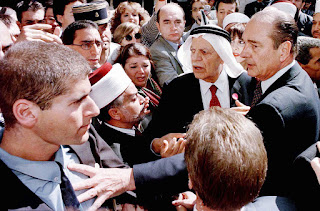 The Israeli prime minister Benjamin Netanyahu later apologized to Chirac, who declared the matter settled. Macron had already met with Netanyahu in the morning.


It appears that now, with the authority and backing of the Vatican, the Communist authorities can go full force against the true Catholic Church in China.