The document proving that the Vatican had been aware of the sexual wrongdoing of Bishop Zanchetta for years - long before Francis promoted him to the high post in the Vatican.

(Rome) It is not just the case involving former Cardinal McCarrick that has been putting Pope Francis in distress for months. This also applies to the case of the Argentine bishop Gustavo Oscar Zanchetta. Francis is silent and seems to be hoping that the storm may soon abate. He does not give a good example.

So far, the bill has been upheld because the leading mass media are still sparing Francis. Since the fall of January 2018, the fall of the Chilean Bishop Juan Barros Madrid exploded, the image of Francis nevertheless took some damage. Since then, the responsible head of the Church has not been liable for the scandal of sexual abuse by bishops who are close to him. The Barros case was followed by further cases in Chile, in Honduras, then the McCarrick case and the Pennsylvania report in the United States of America.

Through the dossier of the former Apostolic Nuncio in the USA, Carlo Maria Viganò, Francis fell directly into the line of fire. In late August 2018, the archbishop publicly accused him of being informed of McCarrick's sexual misconduct since June 2013, but he nevertheless rehabilitated McCarrick and allowed him influence on bishop appointments in the US and the Vatican China policy.

Last December, another case was added, that of the Argentine bishop Gustavo Oscar Zanchetta. The Argentine newspaper El Tribuno and the international press agency AP are publishing a joint report that the Vatican was already aware of the Bishop's sexual transgressions in 2015 and 2017, but did nothing. On the contrary: Zanchetta, who disappeared overnight from his diocese in the summer of 2017, suddenly reappeared in the Vatican half a year later. Two days after Zanchetta's descent, Pope Francis resigned without giving an explanation to the irritated believers in the diocese of Oran. Moreover, after Zanchetta reappeared in the Vatican, Francis promoted him to a high position in the Apostolic Property Administration (APSA). He still sits there today.

The background of his escape from Argentina was unclear. The reason given was the shattered finances he left behind in his diocese. With this justification, Francis already deposed far less traditional bishops. The "Franciscan friend" Zanchetta (El Tribuno), on the other hand, was promoted and of all people to an office dealing with goods management.

It became known through the El Tribuno and AP reports that the real reason for Zanchetta's disappearance was a gay double life, and the bishop sexually corrupted seminarians of his own seminary.

Since the case of Barroso, Pineda (former Auxiliary Bishop of Tegucigalpa), McCarrick and Zanchetta, there is the question of how Pope Francis keeps himself from covering up sexual misconduct. While publicly denouncing the cover-up as an unacceptable evil, he still owes answers to more questions than any other high dignitary of the Church.

El Tribuno, the daily newspaper on the occasion of the Vatican Abuse Summit, published a document dated April 26, 2016, featuring five high-ranking prelates of the diocese of Oran, including the Vicars General, Chancellor and Rector of the Seminary, and other Monsignori, who informed Pope Francis  about the unacceptable misconduct of their bishop. The five-page document provides detailed information and bears their signatures. 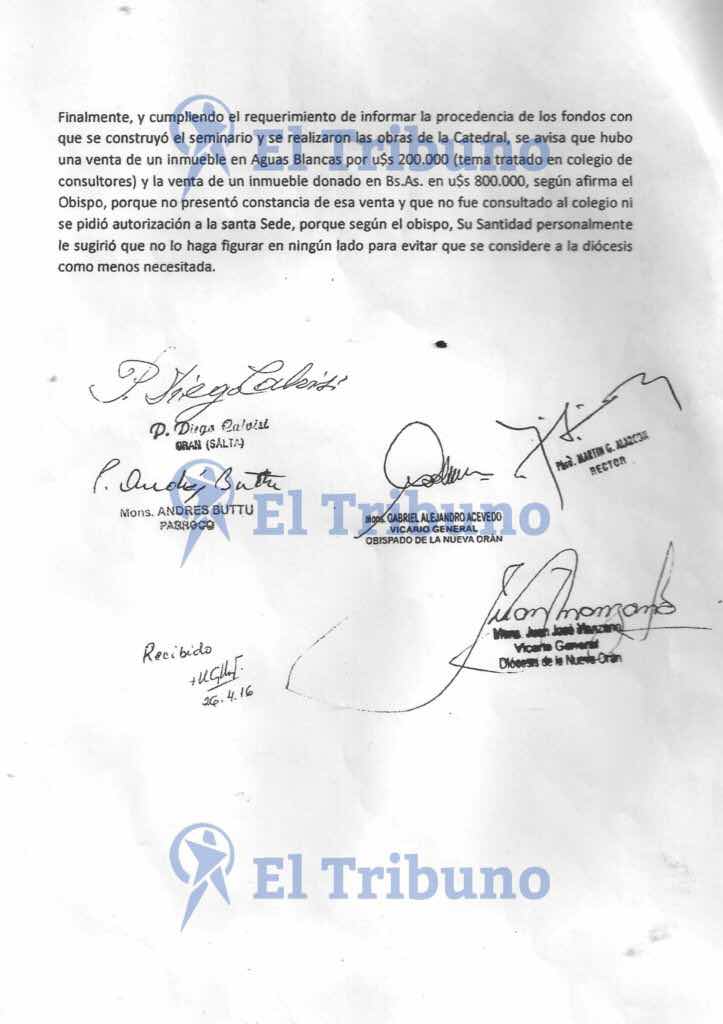 The last page of the document containing five signatures.

Only so much is said: Bishop Zanchetta gave the chancellor on June 21, 2015, the order to publish photos of some events on his mobile phone on the Facebook page of the diocese. On the bishop's mobile phone, the shocked chancellor also found pornographic footage of homosexual acts by adolescents and nude selfies by Bishop Zanchetta, which he had shared with third parties through WhatsApp.

The pictures were saved and the Vicar General informed. Finally, in April of the following year, the five prelates and the chancellor sat down and set out the document they sent to the apostolic nuncio in Argentina, Msgr. Emil Paul Tscherrig.

The subject of the letter was also the authoritative treatment of the bishop with his priests and the financial mismanagement he caused.

Bishop Gustavo Oscar Zanchetta was named Bishop of Oran in 2013 by Pope Francis, although he had previously left a mess in administration and finance as Vicar General in the Diocese of Quilmes.

What credibility can Pope Francis claim for the abuse scandal, as long as he does not answer the questions about his role in those cases?

His refusal to address homosexuality, the main reason for the abuse of minors, raises further questions. Does Francis only want to condemn what is being prosecuted by the secular states, but not what is punishable under Church law? Will he continue to protect homosexuality in the Church?

Don't be surprised if Francis either retires, or is dead soon.
For one thing, he looked terrible at the penitential service for sexual abuse victims at the Vatican. There were pictures of him looking either ill, or exhausted during the service. He was practically collapsed in his chair next to other bishops.
Second- the position of Cardinal Camerlengo in the Vatican, vacant since the death seven months ago of the rad liberal Cardinal Tauran (a favorite of Francis), was left empty for months until suddenly filled with the appointment of Cardinal Farrell...a protégé of McCarrick. This move has been widely condemned both in the Vatican and around the world in Catholic circles and press. Some wrote that to fill the post all of a sudden afterleaving it open for months is a flag that something is wrong...maybe with Francis.
Third- Francis today cancelled his anticipated trip this Summer to Uganda for a big anniversary celebration of African bishops. He had previously accepted it and plans were being made. Usually a Pope doesn't back out of an accepted, planned trip/visit unless there is something wrong....(health wise). Can't be that he's too busy, because it's the job of his staff to clear his schedule for the anticipated trip....which they did. And now he's cancelled it.
Before too long, don't be surprised if either he's dead from sudden, serious illness, or resigns for reasons of "age and illness".
Either way, next time I hope we get a Catholic Pope, who looks, dresses, speaks, and acts like a real Pope....one who loves the Church and our traditions....someone to the right of Benedict XVI. A true Catholic.....not another of what we got in 2013.
And for those who say we'll get another Francis, I just read that all of his "clones" are highly disliked by a good proportion of the Cardinals, especially Parolin.
Also, the report said that very many of the Cardinals Francis has named are much more moderate to conservative than he (a radical) but are unwilling to speak out or "rock the boat". He's appointed some of his own mindset, but they are either elderly, or highly disliked in the curia/among other cardinals to have a chance.
So maybe there is an outside, or perhaps even good chance, that soon, we'll have a Catholic Pope again.

I sympathize and even often empathize with you. But assuming you have a B17 or Pius13. The media would not hold back all the back news to protect a friend such as Francis. Furthermore, Did you consider the definition of "abuse" from a modern media, or liberal western prospective? It would be defined as any nun or priest or lay thst lost their temper over a student's human mistakes or sexual orientation, or disagreement/noncompliance with Church Teachings including abortion, contraception, Transsubstatiation, sacrifice and penance in personal everyday lives and in the Mass,and/or teachings on marriage, adultery, fornication, feminism and even the Social Reign of Christ the Kibg, and how it applies to a multicultural and "freethinking" and relgiously and morally pluralistic republic or democracy.

Thanks Constantine. I like your comments and insight. But I think by abuse, everyone knows what it means....it's the sexual abuse that makes big news, not any disagreement with Church teachings.
I read that there is an "air" in Rome that people in the Vatican are beginning to feel lately....it's an "air" that happened during the last years of Pius XII, and more recently, during the last years of JP II. It the "air" that this pontificate is coming to an end. There's maneuvering in the Papal court, and among Cardinals. It's either someone knows that there's a problem with Francis health wise no one is mentioning.....or...(and this is more likely), that he's told his people that he's ready to quit, retire, resign, disappear, go into hiding, flee, etc. etc.
He looked totally wiped out and defeated during that farse of a "penitential" service in the Vatican during his Synod.
Now, he's going to have to endure weeks and months of condemnation and ridicule over it's outcome, because the latest press is that there's gorwing outrage over that the Synod didn't mention(homos), and that Franci's final speech was totally a failure, a rehash of what's been said before. In a word, his Synod accomplished NOTHING, AND THERE'S GOING TO BE A TSUMANI OF CONDEMNATION OF HIM FOR IT.

This is a good thing, because the outrage will I predict force Francis into a quick resignation, and all his people to do likewise.....including Cupich when he gets back home.

Borgolio knows full well homosexuals are made and not born that way. He wanted to put that out there otherwise, the laity would be even more enraged by what he and his perv clerics have done to society.