California Women Religious Embezzle a Million to Gamble in Vegas

Edit: I just got this article from Mr. Wood about some nuns from California.  This sort of thing seems to go against the saintly mythology surrounding women religious in the USA. I think we know better.

[Irish Central] It is believed that two nuns pocketed up to half a million dollars from a Catholic School in order to go to casinos. 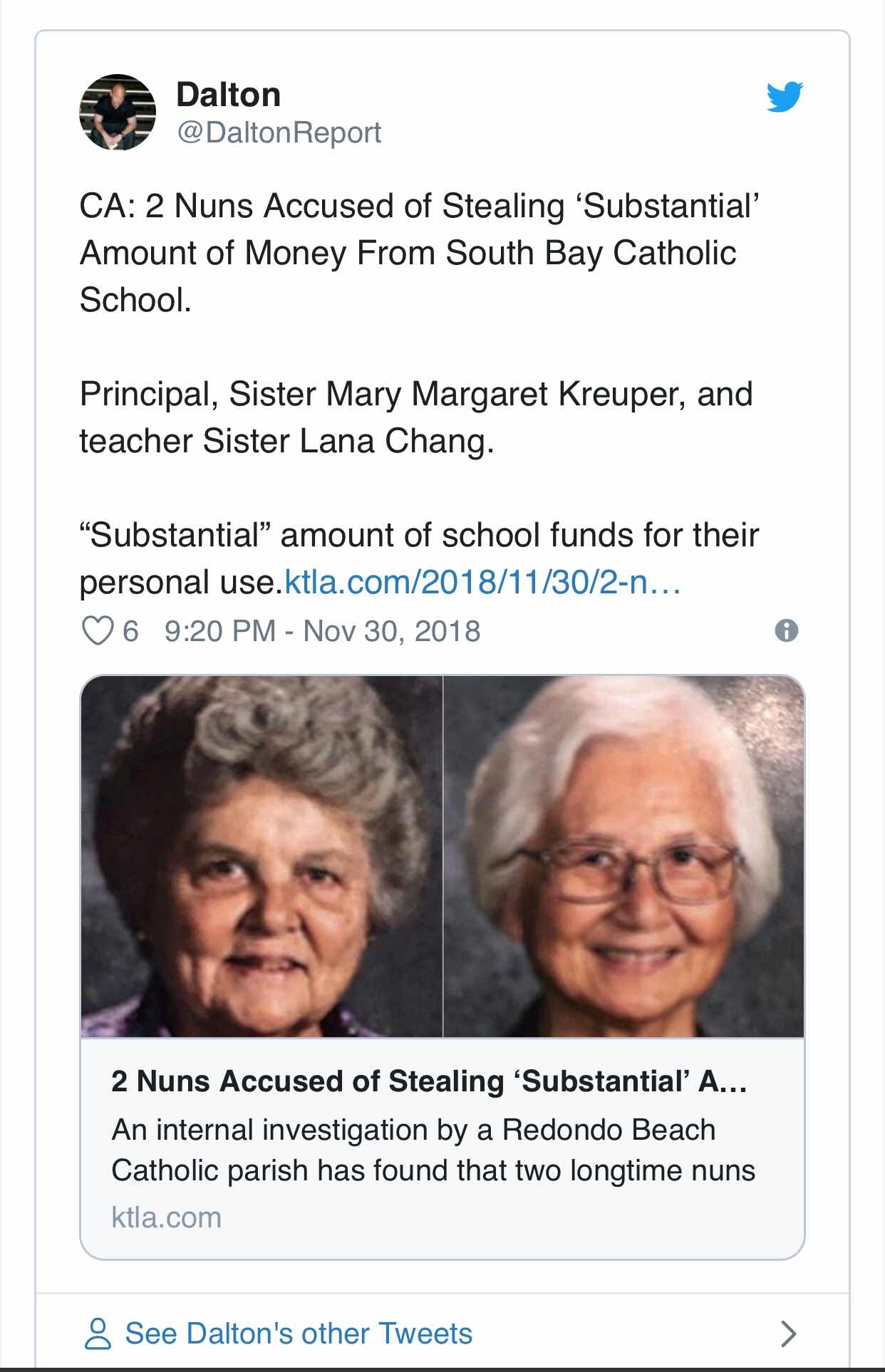 Edit: they look like those brave women religious who can’t be shackled by outmoded uniforms and scruples of a bygone era.

The Long Beach Press-Telegram reports that the nuns had told parents that the school in Torrance was operating on a shoestring budget.
The paper reports that the $500,000 figure "represents only what auditors have been able to trace in six years’ of bank records" - and that many more cash transactions may be unaccounted for.
Officials from the Archdiocese of Los Angeles told parents and alumni gathered at a meeting in Redondo Beach after it came to light that now-retired Sister Mary Margaret Kreuper and Sister Lana Chang had been reported to the police.
https://www.irishcentral.com/news/catholic-nuns-gamble-vegas?fbclid=IwAR1RutKCABkz8L3kbiIIs69WUYAPKmVizzifw_5Q7KdoAZGS5ly29cI1r-Y#.XA6J91cw3W0.facebook
AMDG

Email ThisBlogThis!Share to TwitterShare to FacebookShare to Pinterest
Labels: Modernism, US Women Religious

These nuns are part of the Sisters of St. Joseph of Carondelet which is based in St. Louis. There are a number of provinces. The troubling issue is that there will be no prosecution. The Archdiocese of Los Angeles has stated such and that the sisters are being forgiven. ---- There is a similar case here in St. Louis. In 2009, the technology director for the School Sisters of Notre Dame, Paul Steven Murphy, was convicted of stealing 50k for 10 years for a total of 510,000. He falsified invoices and bought travel to India and Hawaii in addition to buying lots of jewelry. He was sentenced to jail time.---In doing research through the St. Louis Post-Dispatch, the reporter involved, Robert Patrick, found that he was indeed forgiven by the sisters and Archdiocese and never served any prison time. There has to be a deterrent. The religious life is notorious for drawing rejects from society who wish to slurp at the public trough. I served with a religious order where a religious brother "showed up every Fall for the Notre Dame football season".----This is parallel to cases of active destruction of Church property. Last Christmas 2017, St. Monica Parish in St. Louis County was attacked. The creche was covered with a podium and celebrant's chair and set afire. The church all but burned down. A suspect was soon identified. The pastor with the support of the Archdiocese then forgave him and refused to prosecute based on my information that he was an immigrant.----The Church is becoming a "punching bag" for evil. This is the "false compassion" spoken of by Bishop Sheen. The criminal is seen as the true victim and the victim is the perpetrator in the name of society. Let's start using common sense.----McCarrick was finally found guilty. He has been sent to a church in Kansas for penetential reform. Sadly, there is a grade school filled with young potential victims a matter of one block away. Just what kind of message does all of this "misguided forgiveness" send to those in society who are looking for moral guidance from the Church?

This gives a whole new meaning to nuns on the bus.

Seeing that the nuns have been described as "best friends"......might the journalist be hinting at improper impulses? All those terrible and outdated restrictions on "particular friendships", which religious orders used to impose on their members before Vatican 2, suddenly look like basic common sense. Especially as so many cases of financial corruption linked to sexual corruption have already occurred within the Church.

Note the case of Father Walter Benz, who wisely waited until he was on his death bed before confessing.

"Shortly before he died in September 1998, Walter Benz, 72, confessed to stealing an average of $50,000 per year over a 26-year period. Benz admitted the money was used to fund expensive items such as cars, guns, antiques, a Florida condo, and gambling trips to Atlantic City in the company of his secretary, with whom he had lived for a number of years."

"The nuns, described by many as best friends, have been removed from ministry, according to a letter from the order read aloud during the meeting. Meyers said they have been moved to separate convents."

Might have to be upgraded to nuns bought the Bus Company, nuns in the stretch limo, nuns in business class and not forgetting nuns in the VIP lounge playing Texas hold 'em.