(Rome) Next October 19, an elite study conference between members of the Catholic Church and Freemasonry will take place in a medieval castle near the central Italian city of Gubbio, now a luxury hotel.

The city of Gubbio, whose name is mainly associated with St. Francis of Assisi, belongs to the diocese of Assisi. On the website of the diocesan website it describes the conference:

"In a delicate phase of the pontificate of Francis, the [...] event arouses special interest in a historic moment in which more open positions within [the Church] are coming forth, such as those recently received by Cardinal Gianfranco Ravasi, the President of the Pontifical Commission For Culture.” 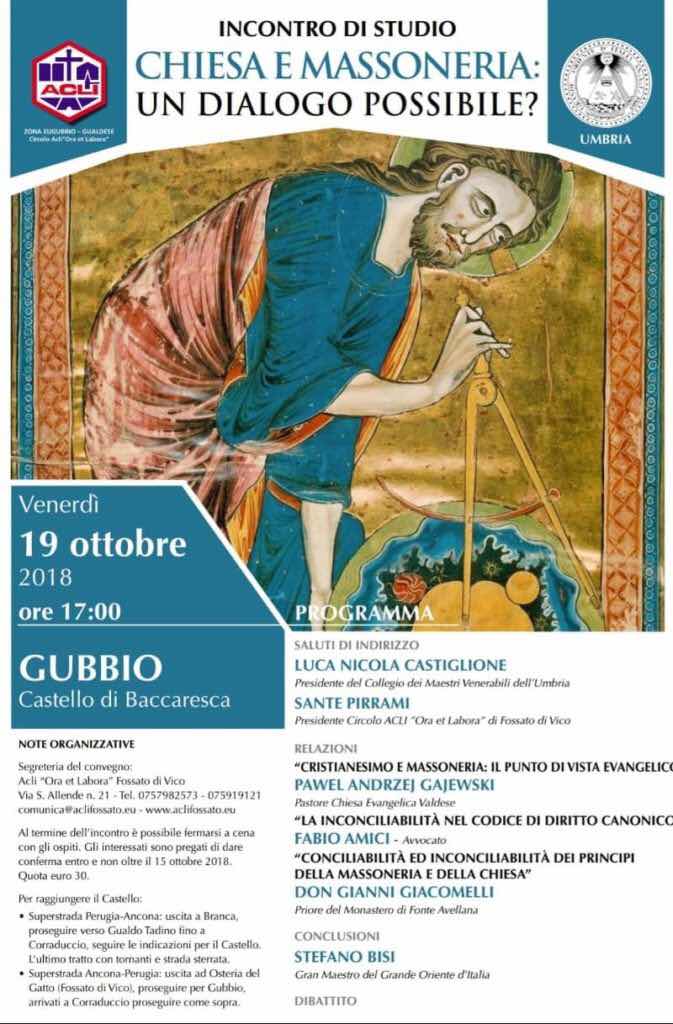 
Specifically, with the open letter "Dear Brother Freemasons", which Cardinal Ravasi published on 14 February 2016 in the Italian business paper Il Sole 24 Ore, declaring himself “more prepared to dialogue and more open  to different positions.” Overall, Freemasonry shows amazing satisfaction about the administration of Pope Francis, who is mentioned in the diocesesan statement (see The Bishop "Very close" to the Pope Congratulates the Masons). These include more recent attempts at "dialogue". First attempts of this kind came after the Second Vatican Council, especially in the 70s. For the Church, membership in the Church of Jesus Christ and membership in a Masonic Lodge is considered incompatible.

The Bishop of Assisi is Msgr. Domenico Sorrentino, who was secretary of the Roman Congregation for Divine Worship and the Order of the Sacraments from 2000 to 2005 (Pope Francis' Mysterious Liturgy Commission).

The Catholic Church is not represented in Gubio, but a certain part of the Church. Among the speakers is a pastor of the Waldenses. Their origin dates back to the High Middle Ages. Since the 16th century, however, Italian Calvinism is actually forming. Especially in Piedmont, but also in Tuscany, the Waldenses have traditionally had close ties with Freemasonry. The press release of the diocese of Assisi uses the term "church" for the Waldenses. According to the doctrine of the Church, as it is written down in the catechism of the Catholic Church, only those communities that have apostolic succession have a share in the Church of Christ, which was never the case for the Waldenses.

Other speakers include the Catholic priest, Don Gianni Giacomelli, prior of the Camaldolese monastery Fonte Avellana; the Grand Master of the Grand Orient of Italy, Stefano Bisi  and the President of the College of the Reverend Masters of the Masonic Lodges of Umbria, Luca Nicola Castiglione.

The conference's motto is: "Church and Freemasonry: Is Dialogue Possible?"

Organizer of the meeting is the Association of Catholic Workers ACLI in the Catholic Action. But the final word will be Stefano Bisi’s, Grand Master of the Grand Orient, Italy's most influential freemasonry.

WELCOME TO THE GREAT BROTHERHOOD.
Do you want to be a member of Illuminati as a brotherhood
that will make you rich and famous in the world and have
power to control people in the high place in the worldwide
.Are you a business man or woman,artist, political,
musician, student, do you want to be rich, famous, powerful
in life, join the Illuminati brotherhood cult today and get
instant rich sum of. 2 million dollars in a week, and a free
home.any where you choose to live in this world
BENEFITS GIVEN TO NEW MEMBERS of ILLUMINATI.
1. A Cash Reward of USD $500,000 USD
2. A New Sleek Dream CAR valued at USD $300,000 USD
3.A Dream House bought in the country of your own choice
4. One Month holiday (fully paid) to your dream tourist
destination.
5.One year Golf Membership package
6.A V.I.P treatment in all Airports in the World 7.A total
Lifestyle change 8.Access to Bohemian Grove
account every month as a member
9.One Month booked Appointment with Top 5 world
Leaders and Top 5 Celebrities in the World.
If you are interested of joining us in the great brotherhood of illuminati CONTACT MR ROLAND or WhatsApp him +2348142587627
or email:illuminatipower666brotherhood@gmail.com