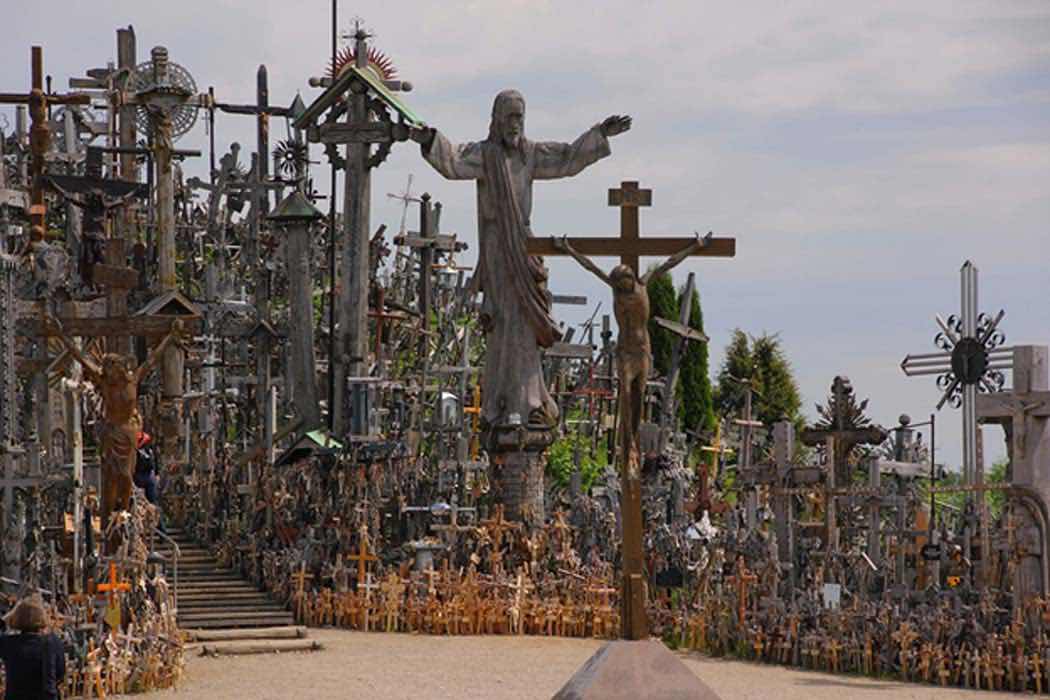 Edit: the Holy Hill which has been a symbol of Lithuanian resistance to Russia and the Soviet Union since 1831  was visited by John Paul II in 1993, but snubbed by Francis in 2018.  The current Pope did mention the Holy Hill, however, only to warn Lithuanians against anti-Semitism. Thanks to a reader who posted these links and pointed this out in the comments of this blog.

VILNIUS, Lithuania (AP) — Pope Francis warned against historic revisionism and any rebirth of anti-Semitism that fueled the Holocaust as he marked the annual remembrance Sunday for Lithuania's centuries-old Jewish community that was nearly wiped out during World War II.

Francis began his second day in the Baltics in Lithuania's second city, Kaunas, where an estimated 3,000 Jews survived out of a community of 37,000 during the 1941-1944 Nazi occupation. He ended it back in the capital, Vilnius, to pay his respects to Lithuanians who were deported to Siberian gulags or were tortured and killed at home during five decades of Soviet occupation.

Francis honored freedom fighters at the former KGB headquarters [Imagine if he visited Gestapo HQ]  where anti-Soviet partisans were detained and executed, solemnly touring the underground chambers that have now been turned into a haunting museum of occupation atrocities.

In a strange irony, Pope Francis did visit the Gestapo HQ as the KGB building you are discussing was used by the Gestapo during WW II and then taken over by the KGB immediately after the war.

I was thinking of Ronnie’s visit to a cemetery of Waffen SS troops. Or a Gestapo HQ qua Gestapo HQ.

I thought pleasant thoughts about the visit to Lithuania until I read the posting. I have an Orthodox priest acquaintance who was born under Communism in Romania. In 1975, I was on board a U.S. Navy cruiser which made a three day state visit to Constanta. This was before the revolution and we actually brought about 20 CIA trained personnel who melted into the crowd during visiting days.---This Orthodox priest told me bluntly that Francis is a Communist which appears more and more obvious. The question is whether he is an atheist as foretold in Fulton J. Sheen's assessment of the Anti Christ. The priest keeps contact with Christians in Romania. A priest friend recently went into the hospital for a routine test and "came out dead". He stated that the Secret police had killed him.---Most priests in Romania are subservient to the government. This is what Francis is setting up in China. It is also his goal to bring this to the U.S.----It looks more and more like he is the one foretold by seers of the past such as at LaSalette.

My Grandmother's village was Siauliai. He IS supposed to attend a ceremony there. Nijole (See article)came to the US after the so called fall of communism to warn Catholics in the Lithuanian RC Churches that Gorby was worse than Lenin and Marx combined. The fall of communism was a carefully orchestrated game through the Vatican /CIA/Opus Dei and the communists.Walesa was a proven to be a KGB agent and the Poles have struck his name out of "The Book of Remembrances" of people who fought against the communists in Poland.
http://www.asianews.it/news-en/Pope-Francis-in-the-Baltic-states,-between-remembrance-and-hope-45003.html

Since Francis is a Communist, radical,liberal,heretic, and probably either an agnostic at heart or an atheist, what do you expect? Do you expect him to visit and pray at the Holy Hill?, To devoutly say the Rosary?, To kneel before the Blessed Sacrament? , to speak of traditional Catholic beliefs instead of socio/political garbage? To dress,speak,and act like a Pope? To be a Catholic?
If you answer yes to any of these questions, then you're (sorry to be insulting), living in fantasy- land, delusional, hopelessly optimistic when there is no cause to be, or simply nauseatingly naïve! The asshole's been in long enough , and said and done enough, for anyone with a brain to realize that Holy Hill was one of the last places a person like Francis would go!!

How can he be, he does not profess the Catholic Faith.

Is that an article of faith for you?

His was an invalid election, not because he is who he is, but because there was a campaign on for him before, and during the conclave by a clique of cardinals. I think they're infamously called the "Sankt Gallen Mafia". They were the late, un-great Cardinals Martini,SJ, Murphy-O'Connor, and also Cardinals Daneels, Kasper, another German Cardinals who is dead, and McCarrick (who campaigned among the most actively for Bergoglio). All of this was against the rules for papal elections, especially in the rules laid out by John Paul II.
Like everything else evil in the Catholic Church these days (priestly pedophilia, gays, etc.) this illegal activity is ignored, and brushed under the rug as if it never happened.
Francis is not REALLY a legit pope because of this, even though he's been at it 5 1/2 years.
Damian Malliapalli

The Botswanan's argument sounds excellent to me, Tancred. Why not? Pope Francis has spouted heresy after lie after slander after heresy. The opposition to him is pathetic.


September 23rd Commeration must have lasted a few hours and the usual Pow Wow meeting afterwards.

Hill of Crosses is a 2 hour car drive from Kaunas and helicopter far less.

I don’t get to decide who the pope is.

True Tancred, but Damian gets to decide who is not the Pope.

If having a surreptitious campaign underway before a conclave is enough to invalidate a papal election, I can think of at least 40 popes we need to strike from the diptychs.

He's a bad pope, elected through ugly machinations. But it's happened before.

I’d be happy if he were forced to resign.