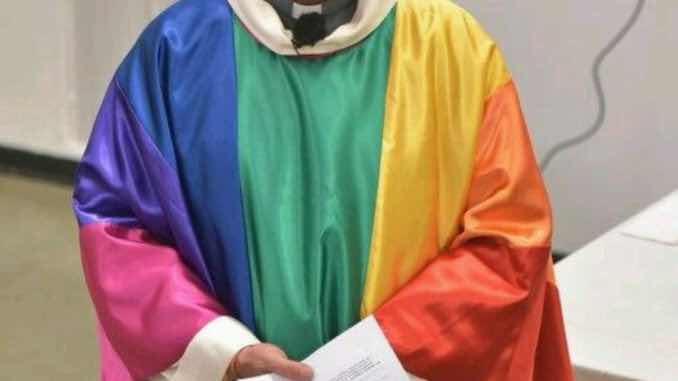 The Homo-Heresy and it’s spread throughout the Church

(Rome) In early July, a priest from the diocese of Verona caused a stir and continues to do so. The competent bishop refuses to take any action and thus proves how "homo-heresy" (Dariusz Oko) is spread and protected in the Church.
In April, Pastor Giuliano Costalunga disappeared overnight from his parish in the Lessinian Alps. Later it was announced that he had entered into a "gay marriage" on April 28 in Gran Canaria. As it turned out, his homo partner had lived with him at the rectory for years.
Ordination despite known homosexuality
It came to light that Costalunga's homosexuality had been known since his seminary days. The then bishop of Verona therefore refused to consecrate Costalunga in 1996 as a priest.
Homo-heresy: Costalunga's celebration for the Old Catholics 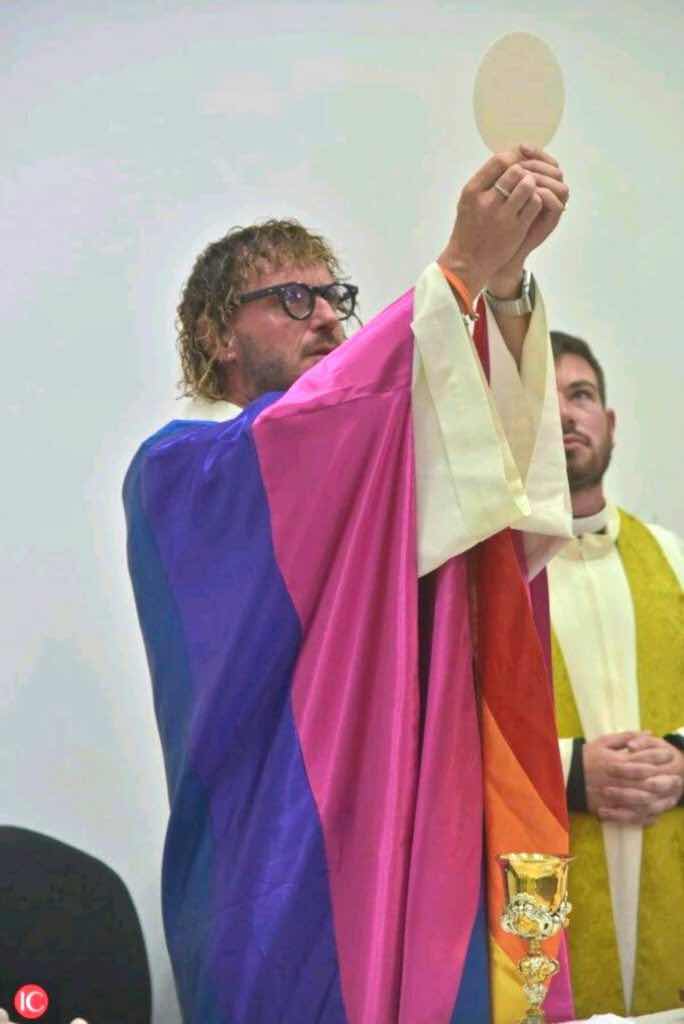 The way in which Costalunga was nevertheless ordained a priest is currently a theme that moves the universal Church: not specifically the individual case of this priest, but the apparently numerous "isolated cases" that homosexual men are ordained priests despite the Church's ordinance against them.
Costalunga did, which apparently is not rare or is even a common practice elsewhere. There is a change from the home diocese to another diocese, where one either turns a blind eye to increase the number of ordinations, or those responsible, sometimes up to the diocesan bishop, are even entangled in the homo-heresy (Dariusz Oko), as was the case with ex-Cardinal Theodore McCarrick.
To counteract the homosexualization of the clergy and the sexual abuse of minors by clerics, which is more than 80 percent of homosexual nature, Pope Benedict XVI. tightened Church regulations, candidates with "deep-seated" homosexual inclinations not to include in seminaries and certainly not to consecrate priests.
As recent scandals and revelations show, these provisions have been ignored in some diocese with the utmost concealment. Rather, Homo-cliques formed in the clergy, which promoted and covered each other within dioceses or orders.
The result is priests like Giuliano Costalunga. When he was ordained a priest outside his diocese and had received a Bishop's change at home, he was able to return to his home diocese unopposed. He brought his homosexual partner with him - also without objection.
The embrace with his home bishop
Costalunga with chasuble in the colors of the gay sceneCostalunga with chasuble in the colors of the gay scene 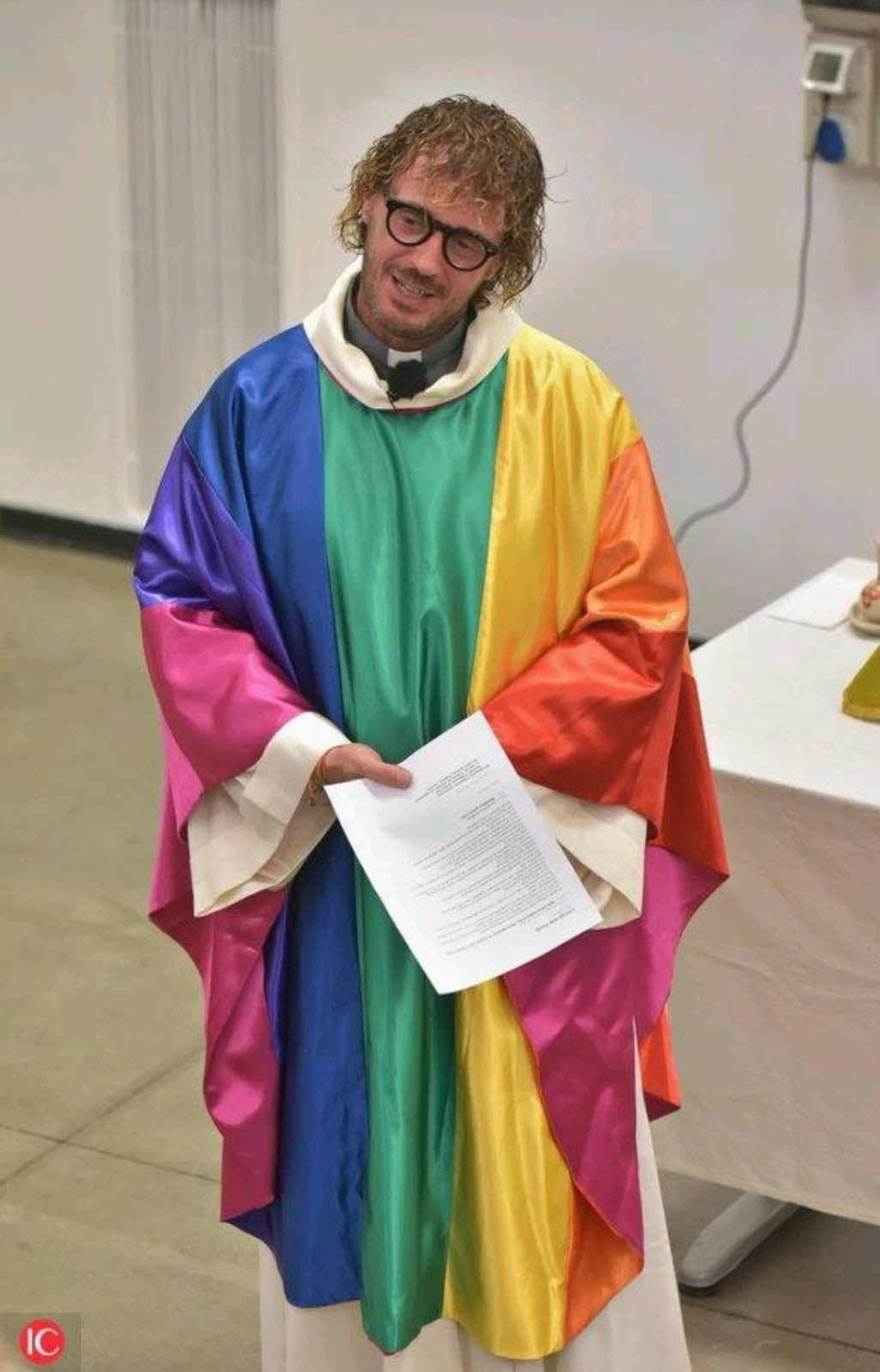 The incumbent Bishop of Verona, Mons. Giuseppe Zenti, gave himself in early summer to a meeting with runaway and now "married" Costalunga, which became a media spectacle. In front of the camera, the bishop and the renegade ex-pastor embraced each other on July 5 in the church of the parish which Costalunga had abandoned overnight in April.
Under pressure from the public, Bishop Zenti made three statements. On homosexuality he quoted Pope Francis as follows:

"I have no right to judge".

To Costalunga's priesthood, he said:

"I still regard you as my priest. Unless you seek dispensation, you will be a priest.”

And as a general statement after all:

"For me, there is only marriage between a man and a woman".

Neither did the bishop speak of sanctions against Costalunga nor were they initially known. According to the teaching of the Church, homosexuality is a grave sin, and canon law punishes it as a crime among clerics. Under pressure from the public, the bishop indirectly condemned "gay marriage" by affirming natural marriage. However, the bishop could not or did not want to reach an equally clear statement on homosexuality.
Celebration for the Old Catholic American Church
In fact, Costalunga was suspended a divinis. A procedure for laicization is underway. He himself made that known and at the same time that he would join the Old Catholic American Church, which was founded just a few months ago. "I'm still a priest for them and I can celebrate Mass," says Costalunga. He had requested no resignation:

"That would be the confession of a guilt that I do not have."

On the 6th of September, he actually celebrated his first Mass in Bergamo for the Old Catholic American Church in Italy.  Catholics of the diocese of Verona and members of the Waldenses (Italian Calvinists) also celebrated with him in solidarity.. The celebration took place in the Auditorium Gramsci (named after the President of the Italian Communist Party and communist theorist Antonio Gramsci) of Malpensata (literally: bad thinking).
There is no question of a conversion by Costlunga, but he moves away from the Catholic Church. In Bergamo he made an unequivocal commitment to his homosexuality by celebrating in a rainbow chasuble. In his homily, he said, "Jesus did not condemn homosexuality. There is nothing in the Gospel about homosexuality. Only love counts. "
At the same time Costalunga announced he is to meet Pope Francis to tell him his life story. He hopes for understanding from the ruling Pope.
Text: Giuseppe Nardi
Picture: MiL
Trans: Tancred vekron99@hotmail.com
AMDG
Posted by Tancred at 6:33 AM