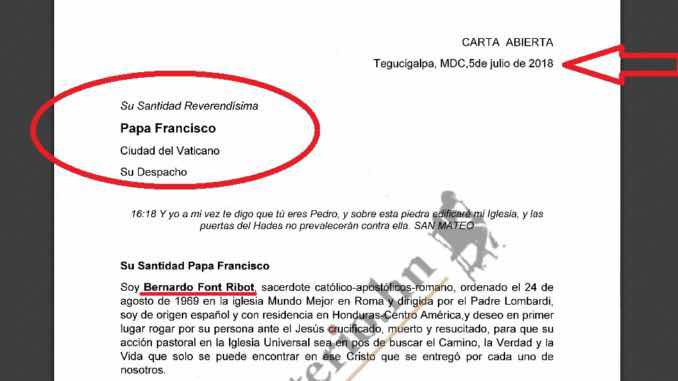 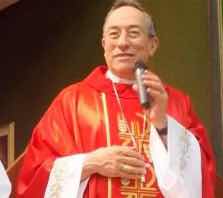 Cardinal Maradiaga
This priest is accusing the primate of Honduras of having lost his private fortune. At the same time he informed the Pope to have reported to Cardinal Oscar Rodriguez Maradiaga for damage to his person and his property to the Honduran judiciary.
Bernardo Font Ribot asks Pope Francis in his letter of 5 July 2018, published by the Honduran weekly, Criterio, that he be reinstated in the priestly ministry, from which he was removed by Cardinal Maradiaga, and that his material losses be restored..
The fortune lost to the priest by the cardinal, according to his information, is his family inheritance. Therefore, when he stood without anything, Maradiaga suspended him after decades in the pastoral service of the priesthood.
Private assets used for construction of Maradiaga’s media
Born in 1943, Bernardo Font is from Seville in Spain. In 1969 he was ordained a priest in Rome in the church of the then Jesuit Riccardo Lombardi and lives in Amapala in the Honduran department of Valle. He describes to Pope Francis how he got to know Cardinal Maradiaga in person, who named him the responsible manager of the church's media in the country. For their construction, he had provided the inherited private assets that his father had left him. These were several real estate properties and shares in airlines and other companies in both Honduras and Puerto Rico.
In his letter, Font emphasizes that Cardinal Maradiaga, through his personal dedication as well as through the use of his private fortune, helped to build up ecclesiastical media in the country, which are now grouped together as Suyapa TV. Likewise, at the request of the Cardinal, he had given support to the central Honduran seminary in Suyapa and to the parish of Miraflores, both in the Archdiocese of Tegucigalpa.
The cardinal had asked him from the beginning to continue the inherited business, because "he could help us better". So he continued the entrepreneurial activities of his deceased father in the belief that he could best serve the local church.
It was then because of the sale he became the subject of slander by the lawyer of Jorge Alberto Maradriaga, as he hoped to enrich the cause. The matter had clarified, however, and he was relieved of all allegations in court.  Maradiaga’s lawyer, however, was arrested in 2008 for documentary falsofication and fraud.
No reasons for suspension concocted
However, on 9 February 2005, Cardinal Maradiaga, suspended him together with his two assistants at that time, the now-retired auxiliary bishop Juan Jose Pineda and priest Carlo Magno Nunez from the priesthood, without giving him the opportunity, either before or afterwards.
Most recently, in 2015, he requested in writing from the Cardinal a declaration of his suspension without receiving an answer.
He himself assumed that he had been removed from his position because others wanted to take his place. The cardinal probably dropped him because he was - meanwhile destitute - no longer interesting.
He lives today penniless and is morally and psychologically excluded. He needed medical treatment because of the severe depression he had fallen into.
In his letter to the pope, Font Ribot also comments on the current Church crisis. In the Catholic Church of Honduras, there is a "dramatic crisis". Under Cardinal Maradiaga, arbitrary actions were taken against "many priests". Among other things, Font Ribot mentions "the homosexual crisis in the seminary of Our Lady of Suyapa," a crisis directly related to Auxiliary Bishop Juan José Pineda.
"Exclusion and Persecution" for Priests Unknown to the Government
Auxiliary Bishop Pineda was retired about two weeks after the letter was written to Pope Francis - but without mentioning any reasons. It is not known whether Francis had already received Font Ribot’s letter at this time. The fact is that so far the priest has received no answer from Rome.
Font Ribot also complains that those Honduran clerics suffer "exclusion and persecution" who are "not close to the government" and that the Church hierarchy "with few exceptions" is manifestly "complicit in the system of dictatorship and corruption" present in the country.
Text: Giuseppe Nardi
Picture: Criterio.hn
Trans: Tancred vekron99@hotmail.com
AMDG
Posted by Tancred at 1:03 PM

Apparently not the first person who was tricked out of their money; some "friends" were also stolen from. Badness all round.

He reminds me of Dreher.