Pope Refuses Questions From Journalists in Return Trip From Estonia 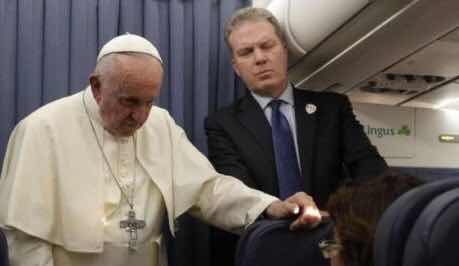 (Rome) In the evening two days ago, in the Estonian capital Tallinn, a plane lifted off with Pope Francis on board. As is customary after every pastoral trip, a flying press conference was held where the head of the Church is asked questions by journalists. Yesterday, however, everything went a little differently.
In the past, the pope's answers were published on the Vatican official website in several languages. After yesterday's return flight, the publication was delayed in the original language. First, the house Vaticanist, Andrea Tornielli published the pope's answers to Vatican Insider. Meanwhile, they were also published on the website of the Holy See.
According to the statements of various journalists who were on board, the head of the Church seemed "nervous". Above all, strict requirements were made yesterday. The pope wanted only to answer questions that had to do with the pastoral trip to the Baltic States. The directive was clear: McCarrick, Viganò dossier and Murphy-O'Connor issues were undesirable. The hot irons were excluded. Anyone who had any questions from the journalists was put off ("first the questions about the trip") and then just got the word, no more ("I'm told dinner is ready, and the flight is not long").
When Vatican spokesman Greg Burke declared the travel questions to be complete, Pope Francis himself quickly took the floor and addressed a few things. This was not a press conference, but a monologue. On the Pennsylvania Report on Sexual Abuse, Francis said:
"I take the Pennsylvania Report, for example, and we see that until the early 1970s there were many priests who fell into this corruption. Then, more recently, they have decreased because the Church realized that it had to fight it in some other way. In times past, such things were covered up. They were also covered at home when the uncle raped the little niece when the father raped the children: they were covered up because it was a great shame. That was the thinking of past centuries and of the last century."
Is the problem of sexual abuse only a matter of the past, "until the beginning of the 70s"? Is that correct? There is a counter-argument that the abuse and total sexual misconduct only spread epidemically in the church in the late 1960s, and especially in the 1970s in parallel with the Sexual Revolution. There were inquiries by the journalists but they were not allowed.
Following the Papal remarks, only one question was allowed, that of a Spanish journalist for an agreement with the People's Republic of China.
The unusual procedure was clearly noted by the journalists and caused some irritation.
"One month after the publication of the Viganò dossier, the Vatican still has no answer - or denial - to the allegations of the former Apostolic Nuncio in the US," said Nuova Bussola Quotidiana.
On August 26, the Viganò dossier had been raised with its grave allegations against Pope Francis and high-ranking Church  representatives of his immediate circle and his resignation was demanded. In response, Francis decreed strict silence the same day on the return flight from Ireland. He gained time, but he did not answer. From his circle, in the following days, content, cryptic announcements were made that the Pope was preparing the "counter-strike" and "coming soon" there would be an answer from Rome that would refute "point by point" the accusations.
Since then, new questions and allegations have been raised with the United Kingdom and Argentina. But the Vatican still lacks any answer. Francis chose a desperate and at the same time, simplest way: he is trying to endure the problem. This only works as long as the secular media spare him. This tactic therefore has a downside: it creates dependencies.
Text: Giuseppe Nardi
Image: InfoVaticana
Trans: Tancred vekron99@hotmail.com
AMDG
Posted by Tancred at 9:31 AM

This disgrace of a human being, Jorge Bergoglio, is both a Yolk and Joke, upon the Catholic Church.

If he had even a modicum of dignity, he would resign the papacy in less than a heartbeat and disappear into the nowhere.

Besides making yourself feel good for the gratuitous venting, what precisely are you going to do about your dissatisfaction?

He’s going to get the collected works of Karl Rahner and update his theology to 1958.

No doubt he will pass Rahner's Theological Investigations on to you for your further education. That would bring up to the mid 1970s.
Immer voran.

I recommend everyone to at least read about Red Luise Rinser’s autobiography.

on the other hand, Pope Bergy is really exposing the corruption allowed to fester in the Church. How ironic that he seems intrinsically involved in that corruption.

I mean, how else would you expect Our Lords razor-sharp scythe the cut down the wheat and the tares? Although, it should would be terrifyingly cool to see the skies filled with Avenging Angels! (This almost never happens!)

Well, what seems to be exposed is that he has been involved im the cover-up as well.

He says he’s the Devil and the asks the people to pray against him.

Who cares about Bergoglio?His modernist Antichurch is on life support. It is past crisis, it is moribound. A graceless, fruitless and ugly entity.
One malevolent commenter asked what are we going to do about it and its heresiarchy? Nothing, it and they will slowly die off by themselves, mutating into just another wordly human organization. Only Church of true faith and apostolic tradition will survive, however small, but it will be fervent, zelous and blessed by Our Lord. Nobody can take our holy God-given faith from us.
That is something a modernist heretic just does not get (I'm looking at you, Legion, aka Peter W, Boris C, etc...). The joy of grace and subsequent zeal is a most beatiful thing man can experience on this earth. All the praxis: asceticism, true fast, kneeling, veneration of relics and icons, ad orientem worship, liturgical language etc. is natural to one who has experienced grace, just an outward expression of internal God-given faith. Without it, all these things are senseless burden. That is why faithless and/or heretic modernist hierarchy removed almost all real praxis. To them, it makes no sense.
Sorry for the long and off-topic post, Tancred.

Sometimes you got to wonder why anyone keeps asking these sadistic pedophiles questions--who's covering for whom? Don't you all know the answers yet?

The abused who burn bernardin's sodomite banners are sent to the psych ward, while the sadistic bernardin sickos are promoted to 'bishop' [sure his voice won't be quivering when it's him burning in hell for all eternity for Satan's pleasure).

"And then this moth essence, this spectacular skeleton, began to act as a wick. She kept
burning. The wax rose in the moth’s body from her soaking abdomen to her thorax to the jagged hole where her head should be, and widened into flame, a saffron-yellow flame that robed her to the ground like any immolating monk. That candle had two wicks, two flames of identical height, side by side. The moth’s head was fire. She burned for two hours, until I blew her out. She burned for two hours without changing, without bending or leaning—only glowing within, like a building fire glimpsed through silhouetted walls, like a hollow saint, like a flamefaced virgin gone to God, while I read by her light, kindled, [while Rimbaud (sodomite) in Paris burned out his brains in a thousand poems, while night pooled wetly at my feet. And that is why I believe those hollow crisps on the bathroom floor are moths.]

P.S. when is there gonna be a chicago report that exposes bernardin and his sickos including his msgr. velo protecting child abusers in the 1980s and still being hailed as great fundraising hero for scholarship children like mo rocca in 2018.

"But nobody knows more than Velo about what went on between the high-profile events in Bernardin's life, about what was on his mind at the end of a long day, about what made him laugh.

Their friendship began with a trip to pray at Cardinal John Cody's tomb 14 years ago. It ended last week as Bernardin died with Velo by his side.

Velo was, at various times, the cardinal's secretary, his eyes and ears, his housemate, his sounding board, his driver, and ultimately the man he depended on to orchestrate his death rites and care for his mother after he was gone.

Cody was in poor health and his backlog of work was growing. Keating, then chancellor of the archdiocese, wanted Velo, a friend, to join him as assistant chancellor.

Velo held that office for two months before Cody died and three more before Bernardin took over. When the new archbishop arrived from Cincinnati, Velo was one of three men assigned as a driver for Bernardin. [the chancellor, a driver?]...

In 1985, Bernardin asked Velo to be his executive assistant and discovered that the young priest had an astounding memory not only for names and faces but people's circumstances. Velo remembered which priests were celebrating anniversaries and knew which ones needed a word of support from the archbishop.

Bernardin soon asked Velo to move into the cardinal's residence so that he could tap that knowledge at any time. For 10 years, the men lived and worked side by side.

Eventually, Velo began to think that for his development as a priest that it might be best if he returned to a parish. But the time never seemed right.

In 1994, Bernardin offered a compromise: Velo could fill the vacant, high-profile position of president of the Catholic Extension Society if he would continue to live at the cardinal's residence. Velo accepted...Velo sat up with Bernardin through his last three nights. When the cardinal died, Velo plunged into the sea of details surrounding his mourning and funeral."

2018."Monsignor Kenneth Velo, Big Shoulders Fund co-chairman, offered an invocation and spoke about the nonprofit, calling it the "best anti-poverty program in Chicago...The event raised a record-breaking $14.1 million, including a $1 million anonymous donation made at the end of the evening in honor of Monsignor Velo [for pimping children?].

1980s: "We were stonewalled. Velo said there was nothing in his [personnel] records. He said, 'You're dealing with motherly instinct. Nothing happened. You can't prove it and even a court of law would not see it that way"

He asked for prayers, so therfore we should pray for him,He surely needed.


How about Pope refuses to go to Hill of Crosses on trip to Lithuania.

He just snubbed millions of persercuted Christians and Martyrs of the Communists.

He sure is showing where his allegiance lies.