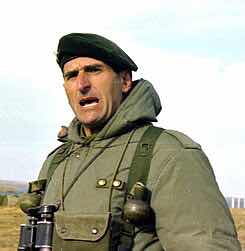 Mohamed Alí Seineldín
Catholic laymen are fed up with cover-ups by cardinals. The Better Church Governance Group will produce a Red Hat Report by 2020. It will involve about 100 journalists and former FBI employees.
Edit: it’s hard to say what the alignment of this organization will be, but “Crux” isn’t too excited about the recent convert from Islam. The fierce looking man above is none other than the great Mohamed Alí Seineldín who converted to Catholicism and served in the Argentine army. He was eager for his men to pray the Rosary and go regularly to confession.
Is this new organozation and its founder the champion we need? We’re inquiring.
USA (kath.net) Catholic lay people in the US are fed up with the cover-ups of Church abuse by cardinals and bishops and delays in investigating cases of abuse. [But they don’t do anything about it.]
A few days ago, an organization called "The Better Church Governance Group" was founded by [Possibly heretical] laymen. This according to "Crux". They demand worldwide investigations into cardinals. By April 2020, a "Red Hat Report" will be presented. In the first year more than 1 million US dollars will be invested in research. All 124 future pope voters will be scrutinized. About 100 researchers, academics, investigators and journalists are to be deployed worldwide. In addition, 10 former FBI employees to work on the project.
The group was founded on the campus of the Catholic University of America (CUA). Jacob Imam, the director of the organization, emphasizes at the inaugural meeting that this is not to be understood as an attack on Pope Francis. [Because he’s allied to their concerns? This from the “Crux” article:  “I think it’s fair to say that a defender of traditional values is not something he would identify himself with.”]
Imam himself converted from Islam to Christianity 3 years ago. "Cardinals must be publicly held accountable for certain offenses, they must know that people will know that if they have voted for a particular person, there is a dark side to this decision that will be acknowledged, so we are also ready to to accompany it with fasting and prayer, but we can no longer allow our children, the innocent, the little ones, the seminarians to be devoured in this way, as has happened so far.”
The final report provides for a rating for each cardinal. It is examined exactly how he has behaved in cases of abuse. Imam announces that after the cardinals' screening, bishops around the world will also be investigated. It should also be determined to what extent they are consistent with the Congregation for the Doctrine of the Faith.
When asked at the inauguration event, whether also possible homosexual cardinals should be made known, the director explained that with various  rumors this will very carefully noted but care must be taken.
Trans: Tancred vekron99@hotmail.com
Photo: Wiki
AMDG
Posted by Tancred at 1:44 PM

NO. HE SOUNDS LIKE REAL FANATIC.
MAKES ME FEEL BETTER.
HE IS ANOTHER FAKE CATHOLIC COMING FROM ARGENTINA.
HE SHOULD NOT BE IN CHARGE OF ANYTHING FOR NEXT 1O YEARS TO BE PROPERLY EDUCATED IN CATHOLIC FAITH AND TESTED BY THE HOLY SPIRIT.
CHECK OUT THE FAKE CONVERSIONS OF MUSLIMS AND JEWS IN SPAIN IN THE MIDDLE AGES UNDER THE QUEEN ISABELLA WHICH EXILED THEM.
IN THE MORNING THEY WOULD BE AT MASS AND IN THE EVENING SYNAGOGUE OR MOSQUE.
DO NOT BE STUPID AND INTIMATED.

And now all we have is a bunch of fruits...