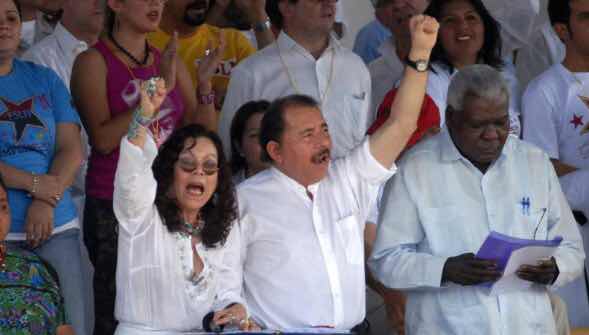 Papal sympathies for the Sandinista government of Daniel Ortega

Edit: earlier, he called down divine wrath upon them.  What happened?

(Managua) On August 30th, US columnist and native Argentinian Andrés Oppenheimer lamented Pope Francis' silence on the situation in Nicaragua. Oppenheimer called the papal behavior "shameful" and demanded an opinion on the "death of at least 322 people in the past four months in protests against the government." Other sources speak of over 400 dead killed by government units or paramilitary groups affiliated with the left-wing government. Meanwhile, it was known that Pope Francis would take a position, just not in the sense of Oppenheimer.

Anyone who has known the history of Nicaragua since the 1970s knows how much the local Jesuits and Marxist liberation theology had on the Sandinista revolution, the overthrow of Somoa and the establishment of a socialist dictatorship. In connection with Pope John Paul II's visit to Nicaragua in 1983, this break through the middle of the Church became particularly visible internationally. In the 1980s, the Western European New Left came up with enthusiasm for what was then the latest "socialist experiment.”

While the Jesuit and Minister of Culture Ernesto Cardenal in 1958 greeted John Paul II at the airport, sarcastically falling to his knees, he was greeted at the same time with a question that he defied the call to resign his ministry, as Church law prohibits clerics from the exercise of political office. At the adjoining Pope's Mass in Managua, the regime and its clerical supporters occupied the square in front of the Pope's pavillion with convinced Sandinistas who whistled and shouted at the Pope. That was the tolerance of Catholic Marxists towards the Pope.

In 1983, the Sandinists, whether clerical or anticlerical, and their European supporters saw the pope in Rome as an enemy. In 2018 they will see one of their own in him.

As it is now known, Pope Francis actually commented on Nicaragua on August 31, a day after Oppenheimer's column, albeit quite differently from what the columnist had hoped.

Pope Francis sent a message of greeting to Nicaraguan Sandinista President Daniel Ortega via the Apostolic Nunciature in Managua. The occasion was the National Day, celebrated on 15 September, commemorating the 197th anniversary of the country's independence from Spain.

Yesterday, the "Comrade" Rosario Murillo, Vice President of Nicaragua and wife of President Ortega, "pleased" the public announced the contents of the papal letter.

And what exactly did Pope Francis write to the Comandante?


"His Excellency, Mr. José Danel Ortega Saavedra
President of the Republic of Nicaragua
Managua
On the occasion of the National Day of Nicaragua, I cordially greet all the sons and daughters of this beloved land and assure you of my prayer that Jesus Christ, the Prince of Peace, will grant you the graces of a brotherly reconciliation and a peaceful and united life together.
Francis PP. "

Read the "handwriting on the wall" and not the graffiti. The writings of Malachi Martin specifically in his novel of "The Jesuits" documents a future Jesuit pope who would work to create a one world socialist government.

Didn't Ortega convert and ban abortion over a decade ago?