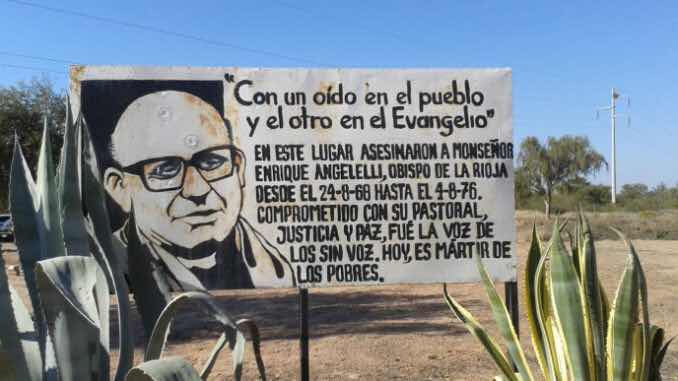 Edit: Communion without being in Communion, consecrated  virgins who aren’t virgins, Popes who don’t believe in God, what next? Martyrs who didn’t die in odium fidei?

"The beatification of 'Montonero' Bishop Enrique Angelelli splits Argentina. A well-known prelate, Archbishop Hector Aguer, took a stand against the martyrdom of Angelelli in odium fidei, who was the victim of a road accident in 1976, whom the proponents of the beatification saw no evidence of murder. Archbishop Aguer breaks the taboo of political correctness and wonders why it was not rather a cause of beatification for the Catholic Catholic Carlos Alberto Sacheri, who was really a victim of Marxist terrorism, and was murdered in front of his children since he was the one who exposed and criticized communist infiltrations in the Catholic Church.”

Vaticanist Marco Tosatti on Nuova Bussola Quotidiana on the beatification of Bishop Enrique Angelelli, which was made possible by Pope Francis, who recognized his death as a martyrdom of hatred against the faith on 8 June, although it is not even clear that he was killed.
The question is in the air: Will Bishop Angelelli be beatified because he maintained good contacts with Marxist circles? And is not the Thomist, Carlos Alberto Sacheri, to be beatified because he was murdered by Marxist terrorists?
Archbishop Hector Aguer was for many years the antagonist of Jorge Mario Bergoglio in the Argentine Episcopate. Pope Francis left his critic a day longer in office than canonically provided. He retired from the Archdioceseon the day of his 75th birthday.
Text: Giuseppe Nardi
Picture: NBQ
Trans: Tancred vekron99@hotmail.com
AMDG
Catholic will always be free for the reader. To make sure that the magazine can continue to appear with new articles day after day, donations are necessary: ​​please support the Catholic with a donation.
Grant summary
Pay easy, fast and secure online now - with PayPal.
Posted by Tancred at 12:13 PM

Good for AB Hector Aguer. This is all about Marxism and splitting the Church in two.

I hope more bishops stand up to Francis. The word should go out that this radical liberal fanatic should be booted out of the Vatican.
The guy they are "beatifying" is no "Blessed" in the Catholic sense. There were no miracles, and he was no martyr. He died in a auto accident! Since when is that martyrdom? They even proved that the accident was not planned by his "enemies". Accidents happen.
The biggest accident is that Francis was elected. The Holy Spirit was sound asleep at that conclave, but the devil was wide awake and working hard to get his man in.
Hopefully this is an accident that can be corrected. After this, and after the article published around the world about a statement by Fr. Thomas Rosica, a very close collaborator of Francis who said that Francis "breaks Catholic tradition whenever he feels like it...." there should be a groundswell to get Francis out.
Damian Malliapalli

JPII already promoted this 2 decades ago because he thought non-Catholic Christians somehow possessed the Catholic faith when they were killed. Read Ut Unum Sint.

Furthermore, the devil is a creature NOT God.

Sorry, but it is NOT "great". Please see my reply to Damian.

The Holy Spirit is NOT asleep. Please see my reply to Damian.

Right. The Holy Spirit does not take part in false conclaves that (s)elect antipopes.