Company Complains to Pope About Unpaid Bills for Visit to Mexico 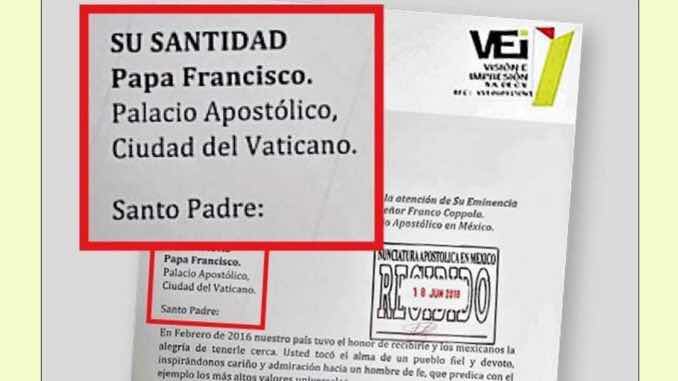 Mexican company complains to Pope Francis that a city council is not paying its bills for the Pope's visit.
(Rome) In February 2015, Pope Francis visited Mexico. Since then, he has carried out a vigorous renovation at the head of the Mexican church. One of the late effects of the Pope's visit is an unpaid bill, which caused astonishment in the Vatican. The Mexican daily Reforma posted the news on its front page on 15 August.
After a Mexican company had asked several times for the payment of an outstandinf bill, it now addressed itself directly to Pope Francis.
VEI Vision e Impresion SA produced tarpaulins, leaflets and promotional items for the pastoral visit of Francis in Mexico, which took place in February 2015. The bill of 789,000 pesos was not paid until today.
The client was the municipality of Ecatepec in the state of Mexico. Ecatepec, a city with 1.6 million inhabitants, is directly adjacent to the federal district of Mexico City.
After repeatedly asking the city to settle the bill, the company sent a letter to the Apostolic Nunciature in Mexico on June 18th. The letter asks Pope Francis for help. It says:

"Mexico has a faithful and pious people, but not all are on the necessary moral level."

The company complains to the pope that the city administration has not only failed to pay for the products for his pastoral visit until today, they still have more outstanding bills. This includes the products that the company provided for the election campaign of the mayor of Ecatapec.
But the "fair wage" is a duty, the company complains.
In reality, the city government and its head owe VEI Vision e Impresion SA 22.3 million pesos. Indalecio Ríos Velázquez from the Institutional Revolutionary Party (PRI), mayor of Ecatapec since 2015, was responsible for the outstanding debts, but lost his re-election this year. Except for brief interruptions, the city has been governed for decades by the PRI, which today positions itself as a moderate Left Party. Ríos Velázquez did not win the 2015 elections, but the candidate of the radical left. With the turn of the year, therefore, a mayor change is imminent.
So far it is not known whether Pope Francis responded to the letter that he received two months ago.
Text: Giuseppe Nardi
Image: Reforma (screenshot)
Trans: Tancred vekron99@hotmail.com
AMDG
Posted by Tancred at 9:40 PM