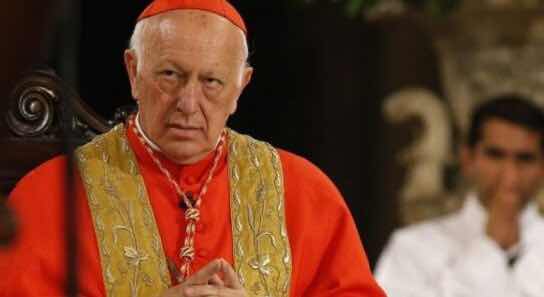 Cardinal Erzzati, “I haven’t covered abuse, on the contrary, I’ve exposed it.”

(Santiago de Chile) Cardinal Ricardo Ezzati, Archbishop of Santiago and Primate of Chile, has been charged with suspicion of covering up sexual abuse.

The case of Karadima, which became known in recent years mainly as the case of Barros, is drawing greater attention. "Today, Cardinal Ricardo Ezzati was summoned by the Rancagua Procuratorate to appear as a defendant in court on 21 August for the suspicion of covering up an offense," the Archdiocese said in a press release.

The cardinal himself affirmed that he was guilty of no such crime. In this sense, he will also defend himself in Rancagua.

"I am firmly convinced that I have covered up nothing and that I have not obstructed the judiciary in any way. Rather, as a citizen of the country, I have made a contribution to exposing the facts through contact with the victims. In this sense, I will continue to make my contribution.”

Prosecutor Emiliano Arias is investigating several priests and seized parts of the diocesan archives of the diocese of Rancagua. The local diocesan Bishop Alejandro Goic was retired by Pope Francis in the meantime. He had already reached the canonical maximum age. Nevertheless, there is a direct connection with the investigation.

After much hesitation, Francis began a mass dismissal, which does not appear to be exhausted. The name of Cardinal Ezzati was called immediately. The Primate is still in office, but in the context of the indictment that has now taken place, the moment of retirement may have come - or may be delayed for that very reason. The Cardinal had demanded the resignation of Bishop Juan Barros from Francis and thereby put the Pope under pressure. That did not go down well in Rome. When Francis finally retired Barros after three and a half years of hesitation, the retirement of Cardinal Ezzati seems to have been a "matter of punishment".

The arraignment by the prosecutor could, if the retirement does not occur in the next few days, may lead to its delay, since he inopportine intervention by the Pope could throw a false light.

The whole affair goes back to the case of Fernando Karadima, one of Chile's best known priests, who was convicted of sexual abuse in 2013. He was condemned by the Church and has since led a life of silence and penance.

I would not be surprised if all these scandals and crisis about priest and sexual abuse/pedophilia/homosexuality gets to the point where Francis just throws in the towel and says enough is enough and resigns. Benedict XVI was forced out by the radicals, we know this, but he commissioned a study on the extent of priestly sexual abuse/pedophila/homosexuality in the Church and the Vatican, and I think that he likewise, gave up and let the wolves throw him out.

We still have the mounting, enormous scandal, far wrose than McCarrick, of the Honduran major seminary under the care of Maridiaga where 50+ seminarians (out of 180), signed a letter complaining and outing the rampant culture of homosexuality among the faculty and many radical seminarians at the facility. Maridiaga reportedly brushed them off as gossipers. This will be a fatal mistake for him. And Francis....who a few months ago brushed off the complaints against Bishop Barros in Chile as "gossip".
Now the scandal re. Cardinal Ezzati, SDB, two scandals (1 sexual,1 financial ) regarding Cardinal Maridiaga, SDB, Cardinal McCarrick, Bishop Pineda, etc.etc, and on and on.
Support for Francis among the Cardinals and in the Vatican is next to zero. I would not be surprised if he quits.
Good riddance. O Lord, bring us a new, vigorous, hardline, traditional, CATHOLIC a as our new Pope before another year is out.

(Even Benedict's supposed scandals, and those of JPII were not like this....and no one can say these are old issues from the time of Benedict anymore. Francis has been in 5 1/2 years. It happened under him. They're all his scandals.
Damian Malliapalli

Here in St. Louis, then Archbishop Burke was run out of town. His replacement came in from Saginaw and he immediately reformed the seminary,threw out the rector associated with Burke, brought in a Jesuit reformer (John Horn), cleared the deck for a liberal (James Mason), and then began recruiting openly gay candidates for the priesthood. There is an article in the St. Louis Post-Dispatch regarding the Rev. Gary M. who then got his MSW and cruised off into the sunset.---The problem is the open acceptance of the gay lifestyle and this can be tracked to our reformer pontiff. Benedict evidently acquiesced and "bailed out over Borneo".

More barking bullshit from the usual shovelers. No wonder the lunar fringe is in total disarray.

Sodomy and paedophilia are vilest of sins. Even if many perps deceive men and avoid judgement, they will find it is a tad harder to manage that with the Terrible Judge.

There's a rather interesting correlation between same sex attraction and heresy. One might even suspect there is causation.

John C at 3:07 AM evidently has inside experience of such 'causation'. Pray Tell, share the pathology, Invert.

Guys, a good name for Gaybrielle would be Legion. They are many, and all of them evil.

I think he’d be a lot better off praying his Breviary.

Chalk up another one. Bishop Wilson in Australia resigned today for covering up queer/homosexual/pedophile priests.
This Pope Francis appointment Chile cardinal will probably resign too.

Do the Church a favor and be the next to resign, Pope Francis.

@Damien: That is the way that the "wind is blowing". Hopefully, it will grow into a hurricane.

I was thinking after I read about Wilson. There's definitely more. The scandal of the Honduran seminary with the 50+ good seminarians outing the massive presence of gay seminarians and priests there. Maridiaga who is in charge of the place just blew the whole issue off as the work of "gossiping". Good Catholics are going to have his neck for that bit of condescending attitude. Same kind of crap Francis gave on his trip to Chile, dismissing everything until it grew into a huge scandal. THAT episode should have been the catalyst to bring Francis down...but nothing seems to stick to him. He came out of that like a hero.
Not this time, I don't think. McCarrick, Wilson, Pineda, the Honduran seminary, Maridiaga and his embezzling hobby, gays in the Vatican, etc. I think there's going to be even more, and this time, one day, we'll here on the news before too long that Francis is quitting.

You're right, JBQ. There will be a hurricane, and it'll blow Francis away, and his people too. Now there's pressure for Cardinal Farrell to come clean and quit. He's one more name to add.

Should be interesting. We should all pray for the tsumani to wash them all away.....maybe by Christmas :)

Kopronymos has given up on his wannabee moonlighting job as a papal undertaker to do the bone rattling and chicken sacrifices as a wannabee hoodoo voodoo witchdoctor summoning tsunamis to dump on the Pope. He'll probably find that a tidal wave of crap lands on himself.

I am Legion, for we are many.

You’re going to lose it if Bergoglio has to resign.

You need help, Clem.
I suggest you see a shrink for those unbelievably unbalanced comments, either now, or after Francis is forced to resign. Believe it or not, there's mounting pressure in the Vatican for him to do so.
By some Kleenex too for your tears.....you'll need them.

I meant "buy" some Kleenex. Duh!

The commercial priest in the background of the picture is yet another Syro-Malabari from Kerala.