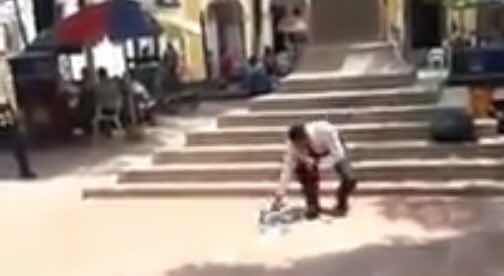 (Bogota) A video triggered  in Colombia showing a Protestant pastor who destroyed a statue of Mary on the feast day of Our Lady of Mount Carmel, July 16.
The incident took place in Santa Cruz de Mompox, a city founded in 1537 in Colombia with today about 45,000 inhabitants. On July 16, the day the Catholic Church commemorates Our Lady of Mount Carmel, the Protestant pastor Ospina Gazcon publicly smashed a statue of the Virgin with a hammer.
Catholics of the country reacted indignantly to the desecration. The justifications of certain free-church circles of Calvinist imprint are known. Sadly, according to the faithful of the parish of the Sacred Heart of Jesus in which the incident occurred, these circles did not bother to verify the truthfulness of their prejudices. And that they do not know how to distinguish between veneration and idolatry. They would soon realize how wrong their opinions are, "but their consequences hurt us a lot," said a parishioner forthe daily El Blanco.
Our Lady of Mount Carmel is an honorary title of the Blessed Virgin Mary and patron saint of the Carmelite Order, whose origins date back to the Crusades, when crusaders withdrew in the Holy Land as hermits to Mount Carmel via Haifa in the early 12th century. There they had already found hermits of Eastern Christian tradition.
The incident in Colombia shows that it’s not only Satanists and Islamists who destroy Mary statues.
So far, no apology from the pastor has become known.

We should always keep in mind that Protestants are a watered down version of Islam. Some worship Christ as God. Others like Mormons or Jehovah Witnesses treat Jesus as a profet. Protestants and Protestant nations have historically sided against Catholics in wars against Turks and Moors. Both Protestants and Muslims reject a Priesthood and unbloody sacrifice, and personal sacrifice and Purgatory, to make up for your sins.

If the Church hadn't replaced the Gospel with Social Justice missions that would never have happened. The people are now taught prosperity gospel instead and the fruit of that gospel is demonic anger and resentment.

Ironically, the best hope for this 'pastor' is if he started praying to Our Lady. She wouldn't fail to bring about a conversion of heart.

The poor fellow had a troubled upbringing in an environment of extreme social violence. He will probably be awarded with an all expenses paid trip to Fatima and Lourdes.

"awarded with an all expenses paid trip -----to prison." is what he deserves.

No they don't. They just don't like Catholic Saints. I know plenty of Protestants who have photos of family members and friends, have no problem with statues of historical figures or in museums. I could go on...

I always find it funny, that Protestants would tell you that we follow Jesus and his example. Following the 10 commandments Jesus honored his mother. How do you Jesus likes they way they honor his mother?

As an Italian, I cannot forget that England acted side by side with Barbary pirates who ravaged the Mediterranean during the XVI and XVII century.
Better Turkish than Papist, ain't it so?
Oh, and the Anglo elites are the most faithful supporters of Saudi Arabia's proxy war against Levantine Christians.

This is a horror! Where are the Catholics? Why are they not defending the mother of God?

@John Kennedy re: Catholic Saints. I graduated from one of the 28 Jesuit colleges and universities. At that time in the early 70s, all of the statues were removed from the church. I found out some time later in a celebration involving my elderly father now deceased that the statues were still there but kept in a "closet" in the basement. Mass was held in that basement for college students who were turned off by the church where I would attend Mass while attending. They wanted no stereotype role models.---I haven't figured out yet just how you model statues which are gay although the Christmas crib in the Vatican may prove me wrong. This is the same university which ripped down statues of DeSmet for holding a cross over two Indians (Native Americans).

This is why the intention for the 5th First Saturday is to make reparation for the blasphemies of those who outrage Her in Her holy images.