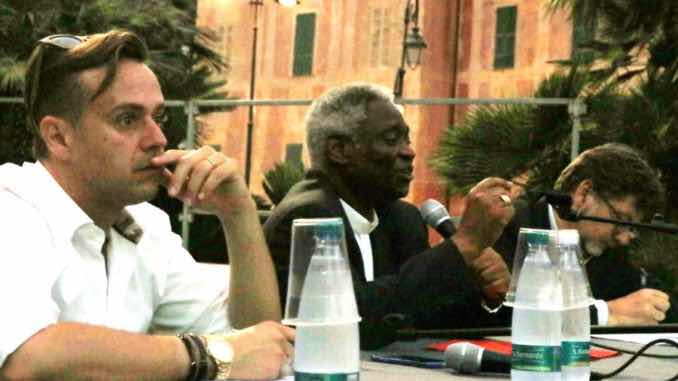 Cardinal Turkson has contradicted European bishops in matters of immigration.

(Rome) One topic, two senior Church representatives and two completely contradictory opinions. The topic is mass immigration, and the two statements can help to clarify the message and the controversial role of the Church.

Cardinal Peter Turkson is prefect of the Dicastry for theHolistic  Development of Man, established by Francis in 2016. Previously, since 2009 he has been President of the Pontifical Council for Justice and Peace. Above all, he comes from Ghana in Africa. 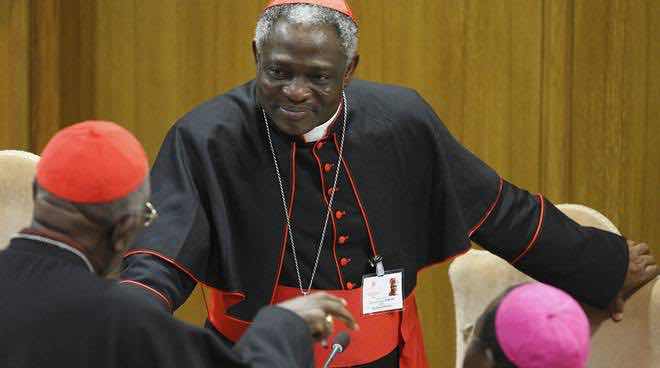 As an African, Cardinal Turkson has something to say about the mass migration to Europe, which is currently giving European politicians a headache. Several waves of migration have already taken place, new ones should be on the way. The politicians of the "open doors" have awakened a spirit they can not get rid of. In the meantime, new politicians, as in Italy and Austria, have to deal with the legacy of their predecessors.

At a development aid conference in Albenga, Italy, the cardinal encouraged the international community to take action in the countries of origin in view of the migration problem. The suggestion sounds different from that of Pope Francis, who for years has been the spokesman for a boundless immigration into the western states.

Cardinal Turkson did not explicitly say so, but opposed attempts to use the Christian message in certain political directions.

Paradox: Church in Africa says the opposite of that in Europe

Africa's bishops are against the emigration of their compatriots. They preach to their compatriots against such an "adventure" and warn against a "false paradise" promised to them. They see a great danger in the emigration that the African states will lose the most important capital: their youth. The bishops preach against human trafficking on a grand scale. There is nothing else about the migration wave that was not initiated by Africans. If European institutions do nothing to increase the birth rate in Europe, but do everything to reduce it through abortion, contraception and homosexualization, but then want to "fix" this indebted demographic aberration through immigration - as if there were no peoples, languages ​​and Cultures, but only arbitrarily displaceable (by whom?) masses of individuals.

Africa's bishops are calling for Western aid, that is a given, on the ground, but not population shifts. Thirty years ago, emigration was not yet an issue for black Africans. So why today, when the living conditions in Africa have become much better?

Voice of the Bishops of Africa is concealed in Europe

But the voices of African bishops are hijacked in Europe, at best ridiculed, but not heard - even in the church. 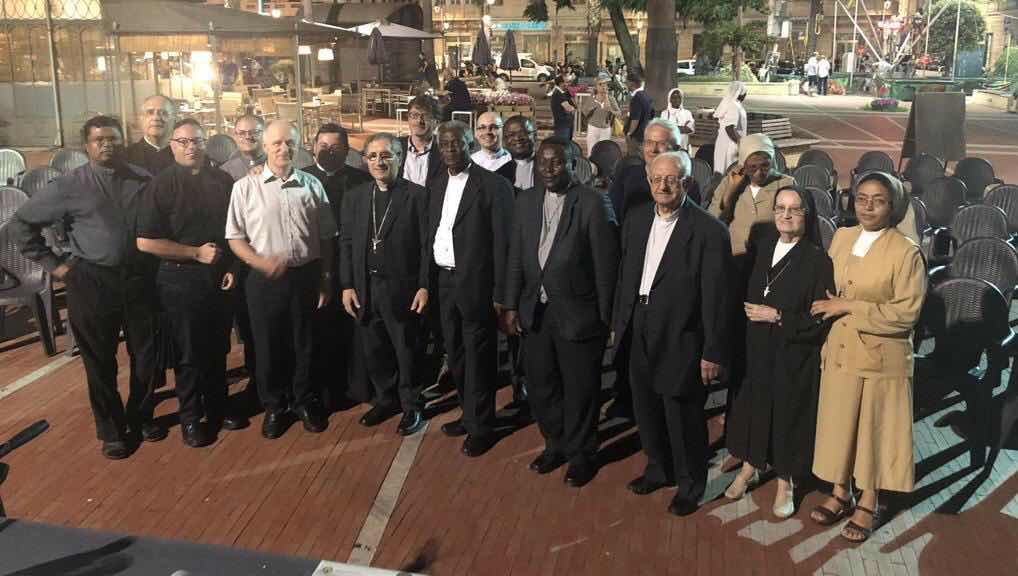 Cardinal Turkson in Albenga with the local bishop, some priests and nuns

Cardinal Turkson spoke a year ago of "turning the tap". Turkson was also the one who a few years ago released the video, when he was under Pope Benedict XVI, in the Vatican, “Muslim Demographics,” which warned against the Islamic conquest of Europe by immigration. He was sharply attacked for that. Today he turns against the "demographic shock". Europe can not shift its demographic problems to Africa.

He described it as a mistake to focus only on immigration, like the aspect of receiving migrants. Rather, the focus should be on emigration and measures should be taken in the home countries to prevent emigration.

It is important, according to the cardinal, that the "good Samaritan helps those who are in trouble". This is one of the most expressive parables of the Gospel. That does not mean, therefore, that it meant a certain form of help, let alone politics.

The parable of the Good Samaritan is a personal challenge. It was not a political call on the government of Judea or the Roman authorities to take care of the needy man. The Samaritan did not call for government and authorities. He had not exerted any political pressure or attacked others who did not act like him. He also did not organize collective help, but personally took care of himself as far as he could. He helped the destitute where he met him. There was no political migration agenda associated with this.

Bishop Galantino: "I do not take in any immigrants in my house"

Cardinal Turkson opposed the politicization of the Christian message. He also indirectly contradicted the Italian Episcopal Conference, which attacked the new Italian government aggressively on the immigration course because of their stance against illegal immigration.

The Italian Bishops' Conference has spent incredible energy in recent weeks to attack the new government, raising a political question to a religious question. Cardinal Turkson made it clear in Savona that the immigration question was not a question of faith.

"I do not accept any in my house because it would be irresponsible to think that in my house, I could solve the problem of each of these people."

That sounds "hypocritical," according to InfoVaticana, as they simultaneously make political demands on the state and help divide society over a political issue.

Christ did not speak of "solving" any problem, rather he said there would be "always" poor. There should be a distinction between a personal request and a political demand.


One Million Migrants via Sahara Desert on way to Europe. Millions expected to follow up.

Call them ¨Jorge´s Army¨ of course cough, cough, in relation to Soros.

Turkson is a total socialist, and until now a favored African of bergoglio's (unlike that pesky burr-in-the-saddle Sarah). If even he is coming out against his boss's immigration initiative this strongly, something's obviously wrong in the casa.


Cardinal Sarah is a protege of Arinze both put their finger in the air to see which way the wind is blowing.

He’s still bucking Bergoglio’s agenda. Mueller is a Socialist too, for that matter.

True, but teresting that he’s going against the Socialist agenda here.

Saving Europe necessarily involves restoring the Holy Roman Empire, and this is something that Americans tend not to understand. They seem to think that adherents of this political doctrine are LARPers, but traditional royalism is a divine vocation of Europe, tightly intertwined with its history, and it is the will of God that a Christian man receive the chrism of kings and the imperial crown, and for the latter we will need a Pope who loves orthodoxy and who is not a wimp, to employ the mediate papal power to transfer political authority on worthy men, which he can do when there is a legitimate cause to do so.

The unction of Christian kings and the Sacrum Imperium hold back antichrist when they are in place; the weaker the Empire, the stronger is antichrist, and the weaker antichrist becomes, the stronger the Empire becomes. The Empire was dissolved in the 19th century, and soon after that the Pontifical States were lost, to the great lamentation of Christendom, and by unleashing the First World War against Austria the secret sects destroyed the last bastion that protected the Holy See against the forces trying to subvert it.

The satanic republics have been trying to erase the genetic face of Europe by absorbing the celto-germanic bloodlines into a mass invasion of foreign bloodlines, thus attempting to loosen Europe from its Christian history; it is an illusion to think that dethroning the satanic oligarchies will be attained with republican structures; remember the disastrous results of the Ralliement, and how it opened the floodgates of the liberal-catholicism of Delamennais. And men like Salvini and Orban, who serve the Likud Jews, are a trap for Catholics, who have been allowing themselves to be fooled by false oppositions since the days of Napoleon.

Why don’t we just cut to the chase and assume that we’re in a situation analogous to the pagan Roman Empire. The Church is still militant regardless of whether is has de facto secular power or not.

The Church is of course always intrinsically militant, but in a Christian political order more souls are saved, and we must strive for the Social Kingship of Christ also in the temporal domain because this is the will of God. He has a divine Right to reign over all aspects of society. We must therefore not be complacent with the present status quo.

Heaven has chosen the House of Faramond to be anointed as a royal race of soldiers who defend the Roman Church with the sword, and history has shown the divine blessings over it as it spread across the thrones of Europe. We must strive to establish, with the help of God, the order willed by Him, and history as well as prophecy have shown that this will includes both the Holy Roman Empire and the royal race chosen by Him, specifically the descendants of Capet. Several Church Fathers saw in the Roman power the force that holds back Antichrist from appearing.

The republics have been forced on the population when the revolutionary agents were uprooting the thrones everywhere. They are not natural to these peoples, and unto this day they remain based on the evil idea of democracy and jacobin abstractions that destroy genuine culture, tradition, customary law, family and the Faith.

Under Blessed Charlemagne, Europe was strong and great, and the priesthood as well as the Res Publica Christiana in general lived secure and flourished. The more the Empire was fragmented, the more there was inner strife and weakening in the face of our enemies.

One Faith, one Supreme Pontiff and one Caesar! ☩ Deus vult!

Muslim immigrants are a tool being used to destroy the status quo. The problem is that Islam has a militant agenda in direct contradiction to the religion of peace brought by the Christ. Francis knows this as a supremely intelligent genus and that makes his agenda supremely complex. The entire pyramid is built on the beliefs of John XXIII and then Paul VI and the merging of Catholicity and Communism. That is the reason for the rejection and burial of the Third Secret.