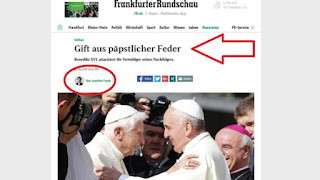 The controversial discussion at the Bishops' Conference had been reflected in 13 votes against the planned guidance. Of these, seven bishops - especially from southern German diocese and the Archdiocese of Cologne - have expressed their reservations in a letter to the Roman Curia. Since the pastoral approach also included questions on canon law and theology, one wished for a fundamental clarification on the part of the Roman Congregation for the Doctrine of the Faith. In addition, the bishops asked for a universal vote in favor of the German solution with regard to global ecumenism. That is why the letter was addressed to Cardinal Koch, president of the Pontifical Council for the Promotion of Christian Unity.


To this process, some secular media raised a "hue and cry" - a Protestant observer. The dispute among the German bishops was denounced as a "rift" and covered with malicious comments. The Berlin Tagesspiegel said, being free from factual correctness: Cardinal Woelki revolted "against the Lord's Supper of Protestants".


Scandalized by a sober clarification request

Joachim Frank, the chief correspondent of the Kölner Stadt-Anzeiger, headed the "campaign-like media wave against the Cologne Cardinal" (Winnemöller): He made a "incendiary letter" out of the request for clarification to Rome. The seven bishops would lead a "sharp attack on their confreres". The chairman of the German Bishops' Conference could have understood the letter "only as a declaration of war." As ringleader of the "Opposition against Marx," Frank puts the Archbishop of Cologne on the pillory: "Woelki leads uprising among bishops" - so the title of the KStA main article from April 5.

Joachim Frank said in an interview with the Cologne Domradio in April 2017, that a good journalist must separate objective reports and subjective opinion comments. He himself does not abide by this fundamental journalistic rule: in the above-mentioned article, he mixes opinions and value judgements with factual information.

In his comments section, the attacks against the "hardliners" become even sharper. Frank assumes that the archbishop of Cologne would be in an "open power struggle" with the Munich Cardinal Marx. His speculations go even further when related to doctrine. The "Group of seven around Woelki" would "bring up such heavy guns" that one would have to look far back in history to find their like. He sees in the bishops' letter the ascending powder-smoke of "battle-concepts," with which he describes "abuse of office, heresy and schism." Although they were not literal, "they were related to the facts in the letter."

There is a method to this agonized rhetoric: The sober and objective request for clarification from Rome - "no problem and the right of every Catholic" (zdf.de) - is painted as a riot until the process becomes one of the "most spectacular and most serious ecclesiastical" actions of recent Church history.


Last week, a completely different spectacular turnaround took place: The Congregation for the Doctrine of the Faith rejected the planned proposal of the German Bishops' Conference. Thus the request of the seven bishops was declared justified. Pope Francis ordered the President of the German Bishops' Conference to Rome, wrote Vaticanists. There, Cardinal Woelki, as the spokesman for the seven German bishops, will again be able to express his concerns. Under the mediation of Bishop Genn from Münster the contentious issues could then be clarified.

With this turn of events, Frank's stylization of Woelki's curial inquiry into an ecclesiastical rebellion has proved to be biased. The scandal balloon of the KStA chief correspondent has burst with a loud bang. The numerous malicious letters to the editor in the Kölner Stadt-Anzeiger, which Frank evoked with his aggressive comments, proved to be misleading.

The day after his "Incendiary letter-"articles, Joachim Frank provided a background article. The full-page text appeared under the motto: "It is worse today than under Meisner." In the center of the presentation, he moved a quote from a bishop's brother from the Episcopal Conference: "What Woelki propagates is the ecumenism of return - the anti-Protestant, anti-modern reflex of the 19th century."

This anonymous citation is highly problematic: either a bishop should authenticate such a negative verdict on an episcopal brother by his name. But if he was too cowardly for an open stand, then a reputable journalist would not discuss that. Because an unverifiable quote always leaves the suspicion of fabrication. In any case, the alleged Episcopal's word fits too well in Frank's concept to put Cardinal Rainer Woelki in the drawer of a "being a dogmatic intransigent in the conservative Catholic spectrum."


There is another consideration that speaks against the credibility of the quotation: The Archbishop of Cologne  has published in the Herder-Korrespondenz 10/2017 is a dense essay on the state of ecumenism. In it he presents that the agreement reached in the Protestant-Catholic dialogue, has further perspectives, but also names the remaining differences very clearly. The sober essay is anything but a work of anti-Protestant reflexes. Such an evaluation is quite unlikely to be the contribution of an episcopal colleague to the substance of the article.

There are similar doubts about a second bishop's opinion in the article. One close to the cardinal warned Frank not to attribute too much strategy and a political agenda to his decisions. For the KStA journalist had also labeled the Cologne cardinal in connection with the Rome letter as a "stickler for principles." By contrast, the confidant from the diocesan administration said Woelki was "very personally committed to the discussion." But even this contradictory statement was turned the Cologne newspaper man into the negative by again summoning an alleged episcopal opinion: "The Cologne brother is a member of ME-Inc."

Joachim Frank is a qualified theologian. He completed his postgraduate studies in Rome with the theological licentiate. But it is striking that he rarely uses his theological background knowledge - for example, by illuminating theological issues from both sides and thus allowing the reader to form his own judgment. Instead, Frank conveys from the outset his own political opinions - and they are more in the left spectrum. From the one-sided point of view, it results in his frequent devaluations and attacks against conservative theologies and churchmen. Therefore, Frank's articles in Church stuff are mostly partisan and tendentious. So informative and objective reports on theology and the Church are less to be expected of him.

A few weeks ago, the emeritus Pope Benedict was the victim of Frank's "ready hostility." In a confidential letter, the emeritus had expressed himself critically of earlier "anti-papal initiatives" by the German theologian Peter Hünermann. The Cologne journalist fired a journalistic broadside at the critical appraisal. For this purpose, he used a commentary on the site subsidized by the German Bishops Conference, katholisches.de .

Already with the title line: "The return of the 'Panzerkardinal'" Frank jumped on the defamatory train of left tabloid journalism. The text was followed by a series of derogatory judgments. So he denounced the "relentlessness of the defender of the Faith, Ratzinger" and the "authoritarian leadership style of Pope John Paul II". Benedict XVI. is "resentful" if he does not adequately honor the life achievement of the theologian Hünermann. Through "nagging and petty problems", for thirty years Ratzinger prevented the "certainly great" theologian and churchman Karl Lehmann from developing his "talent and charisma" for the German church.

Even more scandalous, katholisches.de effected 'Frank's comment in its house newspaper, the Kölner Stadtanzeiger. There he borrowed from the conspiracy novels of Dan Brown: The Panzer Kardinal became a conniving poisoner who abused his "papal pen" as a lethal injection. Church historians would know about reporting on "poisonings at the Vatican." In our day, "Popes would no longer use lethal chemicals", but "the poison flows from their heads." With Benedict XVI.'s last letter, his "successor Francis and the theologian Peter Hünermann would now get a double dose." But even Pope John Paul II had a lethal injectionn with his authoritarian style of leadership - for example, by the "forced installation of Meisner to Cologne Archbishop:" "Papal poison, injected at the right time, took almost 30 years to work." That is the final sentence of an article that the author had headed with the word "analysis."

In Frank's journalistic contributions on ecclesiastical matters, violations of professional ethics and principles are regularly noted: his mingling of report and the commentary has already been mentioned. The most recent texts contain defamatory and defamatory formulations. Scandal, exaggerations and conspiracy theories belong more to tabloid journalism. Anonymous quotes do not match editorial care and truthfulness. Fairness and respect for other beliefs should be expected from a reputable journalist as well as an impartial approach to issues.

The portal katholisch.de had legitimized the publication of the Frank commentary by saying that the writer was "one of Germany's most renowned church journalists." Should the violations of journalistic principles thus belong to the reputation of ecclesiastical journalism? Even more piquant is  the incidence foreseeing this, that Joachim Frank has, since 2015, acted as Chairman of the Society of Catholic Publishers of Germany. But if Frank's scandal journalism were to represent Catholic journalism, then the said society and its 500 members would really have a real reputation problem.