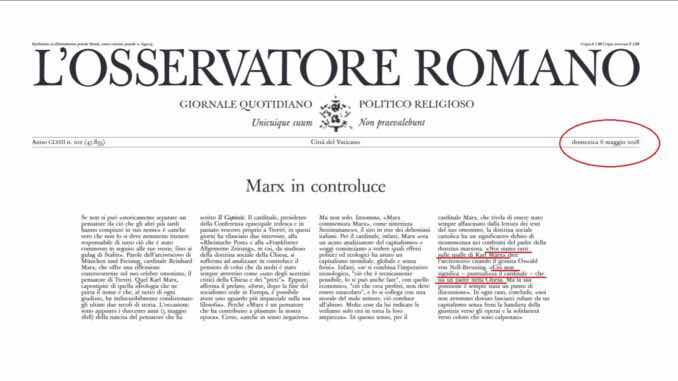 Cardinal Marx almost made Karl Marx a "Father of the Church" - and the Osservatore Romano supports this attitude.
(Rome) Cardinal Reinhard Marx, the President of the German Bishops' Conference, elevates the Communist leader Karl Marx as a doctor of the church - at least almost. And the Osservatore Romano, the pope's official newspaper, supports him.
If anyone is looking for proof of who really has influence in the Church, then read the Osservatore Romano. Anyone who is allowed to publish from the church representatives there and whose initiatives are taken up there and benevolently passed on, enjoys prestige and influence from Pope Francis or the closest in the papal circle.
In yesterday's Sunday edition of the Italian Osservatore Romano, an initiative of Cardinal Reinhard Marx, Archbishop of Munich and Freising, President of the German Bishops' Conference and member of the C9 Cardinal Council, was benevolently published: the "canonization" of Karl Marx.
Karl Marx no "Church Father" - but almost 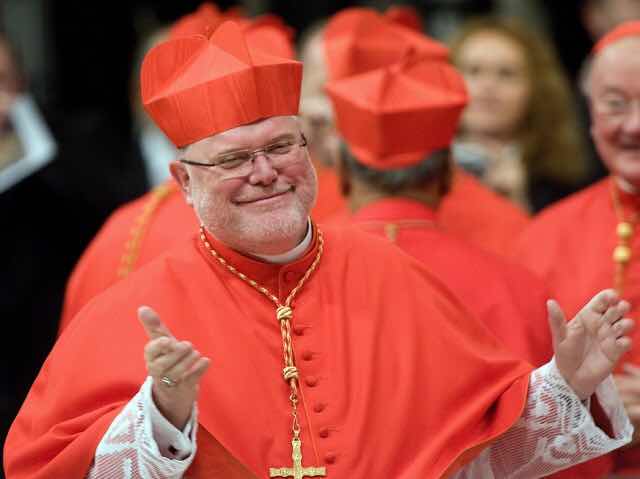 Cardinal Marx makes Karl Marx church father
On the day before, Saturday, May 5, the 200th birthday of the founder of "scientific materialism" was celebrated in Trier. His unusual namesake Reinhard Marx, who is a cardinal of the Holy Roman Church, also participated in the celebration. The praise of Marx for Marx was published yesterday by the Osservatore Romano with the article "Marx in controluce", "Marx in the back light". The title means something like "closer to Marx". The namesake of Marxism is "illuminated" by the cardinal with such sympathy and such spiritual encouragement that it must speak of a quasi-canonization.
Osservatore Romano reported:

"We are all on the shoulders of Karl Marx. That does not mean that he is a church father. "

This outrageous formulation reserved for former popes and church leaders means that Karl Marx is not a church father, but almost one.
These astonishingly unrealistic words by the German cardinal were printed without comment and above all without contradiction by the pope's daily newspaper. The same applies to the acquittal of Karl Marx from any responsibility for the million-fold murder committed in his name by communists and socialists of all stripes in the last 170 years since the publication of the Communist Manifesto in 1848.
Marx, according to Marx, is not responsible for crime
The Osservatore Romano quoted Cardinal Marx:

"If one can not, historically, separate a thinker from what others have done later in his name," it is true, but also true, that he can not be blamed for everything that was committed by his theories in the gulag of Stalin."

That's how easy it is with the "responsibility" of Karl Marx, at least according to Cardinal Marx, who stares at Marxism and all its shades with stare.
The "Flag of Communism"
Cardinal Marx’s controversial statement, quoted by the Osservatore Romano in his edition yesterday, is reminiscent of a sentence by Pope Francis.
"In any case, concludes the cardinal," we should never have stolen an unbridled capitalism, the banner of justice against the workers and solidarity with those who are trampled. "
Pope Francis said in an interview with the Roman daily Il Messaggero on June 29, 2014:

"The Communists stole the flag from us. The banner of the poor is Christian ".

The German cardinal varied and extended the phrase in the sense of the "Papist International", which according to Gianni Vattimo was to replace the Communist International.
The American publicist George Neumayr, author of the book "The Political Pope" said euphemistically in September 2017 in an interview with Maike Hickson on the Pope's comment:

"The popes of the past, who recognized the power of communism to enslave the poor, would have been greatly irritated at such comments."

Under Pope Francis, Osservatore Romano does not irritate with either its near-canonization of Martin Luther or the quasi-elevation to Doctor of the Church of Karl Marx.
Text: Giuseppe Nardi
Bild: Osservatore Romano (Screenshot)
Trans: Tancred vekron99@hotmail.com
AMDG
Posted by Tancred at 2:11 PM

The comments by Cardinal Marx and Osservatore Romano respecting Karl Marx illustrate the degraded intellectual state of the Vatican and many prelates in the Catholic hierarchy.

It is a simple historical fact that once Marxists assume power they rapidly militarize the state, assume dictatorial authority over the people, destroy the national economy, impoverish the people, jail political opponents, oppress religion, abolish free speech, prohibit free assembly, manacle the media and ultimately murder a goodly percentage of their crushed citizenry.

Cardinal Marx and his episcopal ilk are odious, autocratic, often morally corrupt and degenerate modernist heresiarchs, who live affluent lives on the backs of the laity. Let them be anathema.

Does anyone know if +Marx is related to Karl Marx?

The main question should be is he a Jew and has he infiltrated the Church for the benefit of his Hebrew brethren.

Maybe his one of his great great Uncle