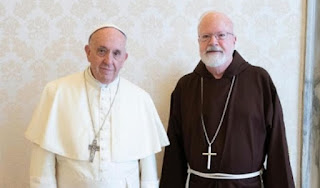 This is "spooky". Why would P. Francis cling to protecting a "sinking ship"? This guy Barros is a pariah and the pontiff will not allow him to be taken to the guillotine. There has to be a reason. This could be the incident which sucks him into the vortex that is swirling "down the drain" and still he won't take away his life preserver. The reason is elusive to be sure. Even the liberal O'Malley is "on board".

The pope protects and promotes many unsavory characters for reasons we can only guess at. Let us look to the Good Shepherd and obey Divine Law which cannot change, no matter what these unsavory ones say or do.

They only sideline people when it's gone public and they have no choice.
Otherwise they promote them. It's a big club.

Pope John Paul II called it "the immovable force" as documented in the writings of Malachi Martin.

While clerics investigate clerics nothing much will change. There needs to be a permanent overview commission that consists of a minority of competent clerics and a majority of competent laity both females and males.
The presence arrangement is far too tribal, secretive, unaccountable, inward looking and 'brand' driven.