Vatican Hacked But They Don’t Seem to Care 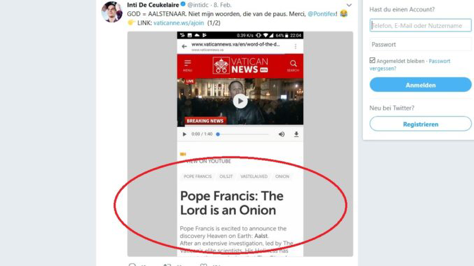 Security gap, but no one in the Vatican is interested.

Edit: but this is just the kind of thing He WOULD say.

(Rome) Vatican News, the Vatican's new news site, has been online for less than two months, but has already been the target of an unusual hacker attack. An "ethical hacker" drew attention to a dangerous vulnerability and put unusual words into Pope Francis' mouth.

A hacker entered the site and published an obviously false, absurd message. The thing, however, had a history.

The hacker himself had informed the site about his intrusion and had alerted the Holy See to a dangerous gap in the security system. But when no one responded, he made the vulnerability known in an unusual way.

As a proof of his intrusion on Vatican News, the hacker published a report with the dubious but always spectacular title: 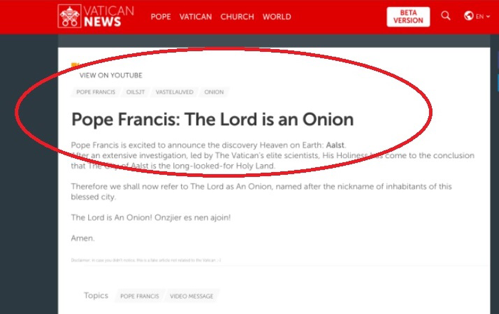 Since nobody in the Vatican responded, the hacker drew his attention to it in his own way.

According to this, Pope Francis came to the conclusion after extensive research that God was "an onion".

Apparently, the people in charge in the Vatican initially suspected an internal harrassing fire, which is why the suspicion was direxted against their own employees. Only when this option had to be excluded, a hacker was accepted as the author of the grotesque message.

Specifically, this is a Belgian Internet security specialist named Inti De Cheukelaire. De Cheukelaire has already made a name for himself in the past with similar actions. Among other things, he managed to redirect links in tweets by Donald Trump.

The IT security expert found a gap in Vatikcan News. According to him, any malware could be injected through this gap and the page redirected.

De Ceukelaire describes himself as an "ethical hacker". He does not act to do harm, but to show gaps and to warn against them. He had therefore communicated his discovery confidentially to the Vatican. When there was still no action taken, he returned to the gap again in the site of Vatican News and published the grotesque message to make the hole obvious with some "humor.”

I am suspicious enough to think that for some if something is damaging to the faith, they are all for it..

It was clearly yet another attempt by Francis to make the Church more apeeling. But like Vatican II, it won't work...

Now if the hacker had inserted something like "Pope reaffirms teaching of Humanae Vitae", it would have disappeared quicker than any credibility Francis ever had regarding the rooting out of clerical sexual abuse in the Church.

I do not know about "The Lord", but Bergoglio certainly brings tears to my eyes in despair!

God is not mocked.