Blessing and Resettlement of a New Benedictine Cloister Reichenstein

On the following Saturday, October 14, the consecration and settlement of the monastery of the Immaculate Heart of Mary will take place in Reichenstein. While monasteries are being closed elsewhere because of the lack of vocations, a new monastery is being moved into Monschau by traditional Benedictine monks.
Monschau is located in the Eifel south of Aachen and borders directly on the territory of the German-speaking community in Belgium (Eupen).
In 2007, the German District Superior of the Priestly Society of St. Pius X, Father Franz Schmidberger, announced the intention to found a traditional Benedictine monastery on German soil in which the sacred liturgy will be celebrated in the Immemorial Mass of All Ages. In 2008, after the purchase of the historical monastery by the St. Benedict Society, the key handover of Reichenstein to the Benedictine monks took place.

After 200 years of revival of an old monastery


In the 11th century, the counts of Limburg had erected Richwinstein Castle on a hill on the upper Rur. Having ascended to dukes, they donated the castle in 1131 to the Premonstratensian Order, which had just been founded by St. Norbert of Xanten. The castle was converted into a double monastery, as was customary in the early days of the Order. When this practice was abandoned, the Premonstratensians, Choir Nuns, remained in Reichenstein. Since 1487 it was then a principal choir house. The buildings, including the monastery church, originated in their present form in the late 17th century.

When in 1794, the French revolutionaries occupied Germany on the left bank of the Rhine, the conquest of the Premonstratensian monastery also began its decline. In 1802 Napoleon Bonaparte, in the course of secularization, abolished the monastery together with many other monasteries.
After several changes of ownership, the lawyer Ernst Wilhelm Handschumacher, the Grand Officer of the Order of the Holy Sepulcher, bought the former monastery together with his wife Helma in 1973 and renovated the complex in the 1970s. It was the couple's endeavor that the buildings be returned to their original purpose.
The twelve monks who will settle the monastery next Saturday, come from the Benedictine monastery of Notre-Dame de Bellaigue, built in 2001, connected to the Society of St. Pius X. The monks speak of the "reawakening of the monastery". In 2009, Dom Matthäus Haynos, the priest of the convent in Bellaigue, was given the name of the monastery church and celebrated the first Holy Mass by a new priest of the monastery. To this end, it had been re-established with a neo-Gothic high-altar with a statue of the Immaculate. 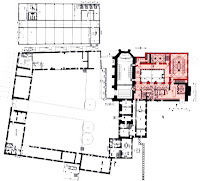 Bellaigue is a subsidiary of the Benedictine monastery Santa Cruz in Brazil. The first four monks came to France in 1999. After ten years, 25 monks were already living in the Auvergne, so a daughter-foundation could be established. For several years, a Benedictine convent has been built, a few kilometers from Bellaigue.
For years there have been urgently needed renovations in Reichenstein, as well as modifications and new buildings. The monks will supply their own heating with 36 hectares of forest belonging to them. The construction of the new cloister was started in 2015. 2017 saw establishment of a provisional central chapel. It will serve the monastic community in the coming four years for the liturgy "in order to be able to reconstruct the monastery church into the central, worthy and sacred space of the entire monastery."
This coming Saturday, Reichenstein will be officially established as a subsidiary of the monastery of Bellaique and be populated by a monastic community.

At 9.45 o'clock Terce and then consecration of the monastery.
At 10:30 am Solemn High Mass in honor of the patroness of the monastery, the Immaculate Heart of Mary.
At 12.30 pm, Sext with welcome and luncheon for the faithful gathering to celebrate this memorable day with the Benedictines.
At 2.30 pm None and then coffee and cake.
At 4 pm Vespers and Sacraments.
At 5 pm, is the establishment of the cloister with the main gate closed.
The Society of St. Benedict, which is legally responsible for the repair of the buildings, regularly informs about the developments and the progress of the construction work with the "Monastery News." They will be occupied with the young monastic community for several years, as the actual monastery with cloister must be rebuilt (see plan).

"We want to build a school for the Lord's ministry. Everything without exception is to be done in this monastery for the glory of God, so that in all God God may be glorified."

This is how Br. Bernhard OSB writes in the latest edition of the "Klosternnachrichten."
Since 1 October 2017 Holy Mass in Reichenstein has been celebrated every day on workdays, Feast Days, Saturdays and Sundays at 7:20 am and 11:15 am in the Immemorial Roman Rite.
All of the faithful are invited to blessing and settlement of the monastery on 14 October.
Text: Giuseppe Nardi
Image: kloster-reichenstein.de (Screenshot)
Trans: Tancred vekron99@hotmail.com
Link to Katholisches....
AMDG
Posted by Tancred at 1:00 AM

This is great news. Just last month, the Cistercians from Austria re-opened/re-populated another monastery which had been closed for years.
It is also sad, because this kind of wonderful refounding-re-opening-re-populating by traditional monks, friars, and nuns of monasteries long abandoned and closed received no support or words of encouragement from the Pope or Vatican. To them, this is probably anathema. But then again, they are spiritually bankrupt, blinded by the sterile sands of Vatican II.
It is also sad, because if Benedict XVI had remained as Pope, as he should have, this rebirth according to Catholic tradition would have been a thousand times stronger, despite the protests of the bishops.
We should all thank God for the SSPX, because in these days, we now have an aged Pope who would rather go to Myamar(Burma) and speak up for "persecuted" Muslims and meet with BUddhist monks, than offer encouragement to wonderful Catholic monks, friars and nuns who are re-populating abandoned religious houses.
I read a book of statistics on religious Orders and houses a few years ago which stated that before Vatican II, there were about 4,000 abandoned, closed or ruined monasteries in Europe (at that time, not because of the lack of vocations, but because these houses had been closed for centuries----not thru losses of monks or nuns in modern times.
Then the book noted that since Vatican II, (and that was as of about 2013), there are over 10,000 closed monasteries, convents, and religious houses throughout Europe, the vast majority closed since 1965. Also the book stated that in Europe, a dozen religious Orders, nearly all of nuns, either merge with another larger group, or go extinct every year, and in Italy alone, close to 100 Orders of nuns have gone extinct since 1965 (granted, some were obscure and small to begin with), France and Italy in Europe have suffered the most.
But this is a sign of great hope for the Church, and a great blessing for the SSPX.
Of course, Francis and his thugs (the local clergy, bishop, etc), will try to derail/defame this restoration.
Damian Malliapalli

So that makes two traditional monasteries in the Eifel region, and none in the rest of Germany.

Archaism and nostalgia are short lived by a bunch of neurotics who can't cope with the modern world or normal human relationships.
The are fast spinning revolving doors for institutions like this especially the SSPX deviants many of whom quit and join groups which are in communion with the Holy See. Have a look at their websites and read between the lines of their confected glowing reports.

The SSPX definitely does have a lot of people eventually leave for fssp or icrsp congregations. And they're pretty honest about their numbers, too. For example this year's vocation numbers weren't groundbreaking at all.

The thing the SSPX has going for them is their school system.