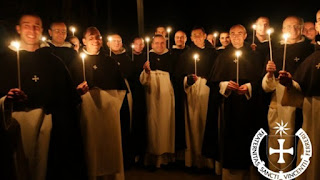 (Paris) The Fraternité Saint-Vincent Ferrier (Fraternitas Sancti Vincentii Ferrerii), an old-ritual, traditional Dominican community, has chosen a new Prior on the 22nd September.

Père Louis-Marie de Blignières, the founder and first successor to the Order, has been elected Prior for the next six years. Pater de Blignières has already led the community of Dominicans, who cultivate the ritual of the Order, from its founding in 1979 to 2011. This long term of office was only possible with special permission from the Holy See to consolidate the still young foundation in continuity. The Dominican tradition does not provide for a direct re-election. A new election can only take place after the end of the mandate of another superior. The Père Dominique-Marie de Saint Laumer, who had been a member since the founding of the Society and was ordained a priest in 1988, was elected the second Prior of the Community, which is located in the Monastery of Saint Thomas Aquinas in Chémeré-le-Roi in Mayenne.
With the end of his term of office, a re-election of Père Louis-Marie de Blignières became possible.

The search for the truth and the founding of the Society

Prior de Blignières was born in 1949, Olivier Marquis Le Barbier de Blignières, son of a French officer, in Madrid. In Paris he completed a diploma thesis in mathematics and physics with a specialization in astrophysics. While studying, he returned to the Church after a departure from the faith and entered a Benedictine monastery in the Swiss canton of Valais. Shortly thereafter, he went to the Priestly Society of St. Pius Xin Econe. In 1977 he was ordained priest by Archbishop Marcel Lefebvre. At that time he was close to sedisprivationist positions.


Committed to religious life and committed to Saint Thomas Aquinas, he founded the Society of Saint Vincent Ferrer in 1979 . Since 1981, the Society had published the theological quarterly Sedes Sapientiae. The Community is dedicated to studying the great Dominican Saint Thomas Aquinas and scholasticism. In 1981 the first brother made the vow.
An approach to Rome took place in 1986, so that in 1987 the first brothers were able to begin their thomistic studies at the papal universities in Rome.
In 1988, the Society was incorporated into full unity with Rome and canonically established by the Pontifical Commission Ecclesia Dei as a community of papal law. The bishop of Laval in France confirmed his establishment in his diocese. After the final approval of their statutes by the Holy See in 1995, Bishop Armand Maillard of Laval blessed the monastery. In 1998, the first election of the priory took place according to the statutes approved by Rome.

Louis-Marie de Blignière's younger brother, Arnaud, after graduating from a military academy, joined a Benedictine congregation and was ordained a priest in 1979 by Archbishop Lefebvre. Because of the legal but unauthorized ordination by Archbishop Lefebvre, he joined the Priestly Society of St. Peter in 1988, which entered into full unity with Rome and was canonically recognized by the Holy See in the same year.


Another brother is the well-known Catholic publicist Hugues Le Barbier de Blignières, better known by the mother's family name as Hugues Kéraly. One year after his death, he devoted a book to his father entitled, "Hervé de Blignières: A Fighter in the Troubles of the Century."
Their father, Hervé Marquis Le Barbier de Blignieres, was a professional officer. He fought in the Second World War and spent five years as a German  prisoner of war. As he was liberated in 1945, he entered the Foreign Legion in 1947 and fought in Indochina. Returned from Southeast Asia in 1956, he contributed to the reform of the École Supérieure de Guerre military college. As a lieutenant, he took part in the Algerian war from 1958 on, and was promoted to colonel, chief of staff of the secret underground forces, OAS, formed in 1961. In 1963 he was sentenced to six months' imprisonment in France. After his release he was president of the interest group of families and children abducted by the FLN in Algeria. In 1970, he himself barely escaped an abduction. In 1989, he died at La Haichois Castle in his homeland Bretagne.
The great-grandfather, Ernest Marquis, Le Barbier de Blignières, a lawyer, was the General Inspector of Finances under Emperor Napoleon III. and after the Franco-German war, Prefect in the Vosges and the Loire. He then became Minister of Public Works in Egypt under the Prime Minister of Armenia, Boghos Nubar Pasha.

Construction of the monastery church of Our Lady of the Rosary

The old rite Dominican community is building a monastery and a monastic church in Chémeré-le-Roi in Mayenne. The shell of the church was finished this year. It is to be consecrated to Our Lady of the Rosary.
The blessing of the new guest house of the monastery took place at today's Rosary Festival.
One year ago, a priest of the Society, Père Augustine-Marie Aubry, celebrated a Holy Mass for the first time in 745 years in the most famous crossroads of the Orient, the Krak des Chevaliers (now Syria).