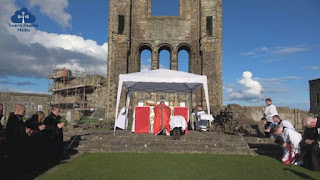 (Edinburgh) The Kingdom of Scotland, located in the north of Britain, united with the Kingdom of England in 1706. In 1560 the Reformation had been introduced into the country, in contrast to England, with a Calvinist variant, which in its Scottish form is called Presbyterianism. The Church of Scotland, which is simply called "The Kirk" because of its character as a national church, has been Presbyterian since then. For centuries, the repression of the Catholic religion, which was carried out by a series of anti-Catholic laws and Catholic persecutions, took place.

Scotland on the way to Neo-Heathenism

Today, self-seeking Scotland is a country on the way to a neo-renaissance. According to the census, only 53.8 per cent of Christians admitted to being Christian in 2011, while almost 44 per cent of the Scots do not have any religious affiliation. 36.7 per cent of the Scots described themselves as religions. A further seven percent did not provide any information on religious affiliation. 2.6 percent, especially immigrants, claimed another religion (predominantly Islam).
In spite of the persecution, the Catholic faith could never be completely ousted from Scotland. Above all in the Highlands and on the Outer Hebrides, Catholic tradition never broke off. In the second half of the 19th century it was reinforced by Irish immigrants. On the inland migration of Scottish Catholics and the immigration of Irish Catholics, the now relatively strong Catholic presence in and around Glasgow has returned.
In 2011, 16 percent of the Scots believed in the Catholic faith.

Hoardes of the Catholic tradition

The Transalpine Redemptorists have their seat in the north of the island, Papa Stronsay, which is part of Orkney Islands off the coast of Scotland. In addition to the Scottish mother house, there is another monastery in New Zealand since 2007. Transalpine Redemptorists also provide the priestly missions to Samoa.
Since 2008 the Filii Sanctissimi Redemptoris (F.SS.R.) are in full unity with Rome. Connected with them is the Confraternity of St. Ninian, whose goal is that Scotland will again return to the Catholic faith. The members of the Brotherhood pray, evangelize and mission.
Patron of the Brotherhood is theSaint Ninian of Whithorn (who died around 432), who is the first missionary of Scotland. Pope Benedict XVI took part in the celebrations for St. Ninian Day on his visit to Great Britain.

Whithorn (White House) is one of Scotland's oldest, Catholic cults, whose existence can be traced back to the time of Saint Ninian. Archaeologists confirm that at least at least since the late 6th century there was a monastery. This has certainly been true since the eighth century. The monastery priest had the rank of a bishop and the monastery church also served as a cathedral. As the founder of the monastery, Saint Ninian was venerated. In 1177 the monastery adopted the Rule of St. Norbert of Xanten and joined the Premonstratensian Order. The monastery had a prominent position and belonged to one of the most important places of pilgrimage in Scotland. Many Catholics, Scottish kings, most recently in 1563, Mary Stuart, made pilgrimages to the tomb of St. Ninian till the 16th century.

With the introduction of the Protestant Reformation in 1560, the flowering season abruptly ended and the abolition of the monastery took place. The last Catholic priest, Malcolm Fleming, was arrested in 1563 for the "crime" of continuing the Holy Mass. In 1568 he died in prison. The monastery goods were confiscated by the Crown in 1587 and transferred to the new Anglican Diocese of Galloway in 1606. The former monastery and episcopal church was only used as a reformed church and fell into decline. At the beginning of the 18th century the main tower collapsed. When a new parish church was built in 1822, the decay came to an end, which today can only be seen as a ruin. In Whitehorn the Monreith Cross was found, one of the largest highways in Britain. A proof of the great age of the Christian sanctuary.
Church ruins today all over Scotland and England are reminiscent of the once-flowering Catholic Church.

The Brotherhood of the Saint Ninian has undertaken a pilgrimage for the conversion of Scotland to the Catholic faith on the 5th to the 7th of August from the Scottish capital Edinburgh to St Andrews. They followed in the footsteps of the pilgrims of the Middle Ages, who pilgrimaged to St. Andrew, the patron of Scotland, to call him to intercede to God.
At the end of the three-day walk, Holy Mass was celebrated in the ruins of the former cathedral of this Scottish city in the traditional form of the Roman rite. The Bishop's Church had been desecrated and plundered by the Protestants in the course of the Reformation. At that place which they had let fall into ruin,  Catholics are again praying for the conversion of Scotland 450 years later.
Text: Giuseppe Nardi
Photo: Sancta Familia Media (Screenshots)
Trans: Tancred vekron99@hotmail.com
AMDG

Email ThisBlogThis!Share to TwitterShare to FacebookShare to Pinterest
Labels: Immemorial Mass of All Ages, Scottland

PF is destroying the faith in order to create a new one which reaches out to all. This could very well be too little, too late.

Did I touch a nerve by saying the Scots folded up their faith like a house of cards before the English while my Irish ancestors fought tooth and nail to keep the true faith? Sorry, the truth stings sometimes.

What a stupid comment.
The old canard the Irish are different people then the Scottish. It is such old propaganda.