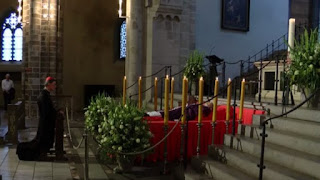 (Rome) Last Saturday the requiem and the funeral of Joachim Cardinal Meisner took place in Cologne. The emeritus Archbishop of Cologne had passed away last July 5th in his 84th year. Benedict XVI Gave greetings to the ceremony, which was read by his personal secretary, Archbishop Georg Gänswein, in Cologne Cathedral. The former Pope's message triggered violent reactions among the Ultrabergoglians.

Cardinal Meisner, who had to witness expulsion from his East German home Silesia as a child, and afterwards more than 40 years of communist dictatorship in Central Germany, is one of the four signatories of Dubia (Doubts) on the controversial post-synodal letter Amoris laetitia by Pope Francis. The four cardinals who addressed five questions to Francis in September 2016 have been regarded as the principal enemy of the papal court and convinced Bergoglians. Undaunted, Cardinal Meisner held fast to the questions which are a critique of the latest developments in the Church. He was "returned home" (Benedict XVI) without receiving from the ruling Pope his answers, and without being received by him in audience, which he had requested along with the other signatories in April.

Convicted shepherds were sought, "who resist the dictatorship of the temporal spirit"

Benedict XVI's greetings were, therefore, particularly badly received in the Pope's circle. The Pope, who had resigned in a surprise in 2013, said in Cologne that the Church "urgently, especially needs  convincted shepherds, who resist the dictatorship of the Zeitgeist, and live and think decisively from the faith."

Benedict XVI did not answer directly to the conflict of the deceased Cardinal with Pope Francis' agenda and the Dubia to Amoris laetitia. Nevertheless, he made every effort to make it clear that he saw Cardinal Meisner as such a "convicted shepherd" who resisted "the dictatorship of the Zeitgeist."

This unmistakable distinction for the man, who, together with three other cardinals, challenged the ruling pope, drove some Bergoglians to be red in the face with anger. This also applies to a further passage in the greeting of Benedict XVI, where he compares the current state of the Church with a boat "almost filled to capsizing". This image was also used in the Missa Pro Eligendo Pontifice of 2005, which preceded the Conclave, where he was elected Pope. Once again, he spoke in 2012 when he blessed the participants in the pilgrimage of the Catholic Action of Italy, who had come to Rome in the year of their faith.

The reactions could not fail, as some Ultrabergoglians have already bitterly complained to public statements from Benedict XVI in recent months. In connection with a greeting to Cardinal Robert Sarah, Prefect of the Congregation for Divine Worship and the Order of the Sacraments, which was added as an epilogue to his latest book, "Power of Silence", led the rabid frothing of leading progressive representatives, who have been particularly zealous since the election of Francis as pope. Alberto Melloni, the director of the Bologna Progressive School, and Andrea Grillo, influential liturgist in the era of Francis, clearly demanded that Benedict XVI. be silent.

This, however, can not be forbidden, and he gave a greeting to his secretary, Archbishop Georg Gänswein, which he read in Cologne.

Alberto Melloni, head of the School of Bologna, whose main work, the multi-volume history of the Second Vatican Council, was translated into German at the expense of the German Bishops' Conference, made a poll on Twitter. Melloni doubted polemically that the words came from Benedict XVI. He wrote the disparaging tweet,

"There is a Proto-Ratzinger, a Deutero-Ratzinger and now also a pseudo-Ratzinger with negative allusions to the ruling pope."

"It would be nice to know who wrote the message of Joseph Ratzinger for the funeral of Cardinal Meisner."


Both regard Benedict XVI's words as a criticism of Pope Francis.

The ghostwriters of Francis and the memory gaps of the pope

It is widely known that Benedict XVI personally, as Pope, wrote by hand all the texts which were important to him. Nothing could have changed in this practice of the frequent author. Francis, who has never written a book, knows, however, that he is using documents with the help of ghostwriters. Have the two Bergoglians, Melloni and Faggioli, perhaps, confused Benedict XVI. with Francis?

Their polemic is aimed at Benedict XVI, who has already resigned from the papacy. It may, therefore, be doubted that the two Bergoglians, with their pages, were alluding to Pope Francis. However, on 16 April 2016, on the return flight from Lesbos, a few days after the publication of Amoris laetitia, he had to admit to the question of the journalist Jean-Marie Guénois of Le Figaro that he could not remember exactly what he had put down in the recently published Apostolic Letters.

On the same occasion, instead of responding to the question of Francis Rocca from the Wall Street Journal, Francis referred to his colleagues: "I recommend you to read the presentation given by Cardinal Schönborn, who is a great theologian. He is a member of the Congregation for the Doctrine of the Faith and is well acquainted with the teachings of the Church. In that presentation your question will be answered. Thank you."

Well done Pope Benedict you have them rattled now. Let's all get behind the three remaining Cardinals. Viva Cristo Rey !

The three remaining Cardinals will have nothing more to say. Mueller told them months ago that Amoris Laetitia was not in conflict with traditional Catholic teaching. They are in desperate need of re-education in fundamental systematic theology.

None of what you expect is really consistent with historical Catholic theology, so I suppose this is a kind of admission of guilt on your part.

@Peter W: If "Amoris Laetitia" was not in conflict with traditional Catholic teaching, it would be an encyclical. However, anyone with common sense knows that "fornication, adultery, and sodomy" are not part of traditional teaching. Just ask a child. That is why the Mother of God has always appeared to children. They are not blinded by their sexual urges.

So what? Everybody knows that Benedict is hated in Germany, even when he was a simple theologian, Küng docet.

Peter W doesn't have the capacity for rational thought JBQ....you're wasting your breath.

Your issue is with Cardinal Mueller not me.

I suppose the French Bishops praises of former pro abort Simone Veil was all Cardinal Muellers fault too. You are going to be very disappointed if you think the three remaining Cardinals will have nothing more to say. If it's a fist fight we are in for my gloves are now officially off ! Bring it on.........

JBQ, if you are going to argue your case from the old 'authority of the documents' perspective, you might address the fact that JP II's 1994 'Ordinatio Sacerdotalis' was not an encyclical but an 'Apostolic Letter.'
Beware of what George Weigel calls 'Cafeteria Catholicism' and what Benedict XVI termed the 'moral relativism' or is this completely different?

You can 'suppose' all you like about the French Bishops on anything. The matter being discussed here is where the remaining three 'Dubia' Cardinals go from here.
My response is that they have isolated themselves from probably the vast majority of the world's bishops, certainly the Cardinals, by reason of their ignorance of the Catholic Tradition and their blatant showboating.
They're done.

Not so fast Peter, we are dealing here with three men who are the most learned, humble, faithful and contemplative men. To say they are ignorant of Catholic Tradition is to defy reality and the truth. They will know exactly what to do when the time is right and you can be sure that there are cardinals and bishops who support them. More than you think In God's time this will all be revealed.

He was hated from the moment he stepped on to the loggia to accept his election as pope in 2005. When his name was announced, I fell on my knees and thanked God. When he resigned, I cried. It was worse than losing my father four years later. (Actually, it IS worse, since he was our spiritual father.)

Agreed, but first BXVI needs to reveal the Third Secret of Fatima (I.e. the exact words of Our Lady which follow: "In Portugal, the dogma of the Faith will always be preserved... ) which was supposed to be revealed in 1960.

The late Fr. Nicholas Gruner (and also Malachi Martin) often wrote that the Holy Father will not get the graces he needs until he reveals the Third Secret as noted above. When he does, THEN he will get the graces he needs to order and make in union with all the bishops of the world the Collegial Consecration of Russia to the Immaculate Heart of Mary. THEN we will have peace.

Check out www.fatima.org. They're the best resource on Fatima.

Peter W firstly,the matter that you brought up was that the problem was with Mueller. Secondly have a read of the post regarding the French Bishops and Simone Veil if you need clarity. Thirdly the three Cardinals have many times stated that they are not alone in their views and that many other Cardinals are with them on this. Finally the three Cardinals will probably be forced to exercise their duties as Cardinals and issue a formal correction. They are certainly not done.

God will take away soon PF so that BXVIwill reveal the III secret and consecrate Russia to the Immaculate Heart of Mary. Let us pray and beg our Blessed Mother, all the Angels and Saints in Heaven to intervene.

Margret, just saying it doesn't make it so. I'm sure the Nazi originated Spiegel and Volker Beck brown storm troopers would like to create that impression.

Do you want the Blessed Virgin Mary to kill the Pope?

Why are you all still hung up on an old leftist ecumenist who embarrassed the entire Novus Ordo by "retiring"?