Edit: this is from the FSSP site with thanks from Accion Liturgica. There are plenty of pictures at the Society site with Cardinal Burke presiding: 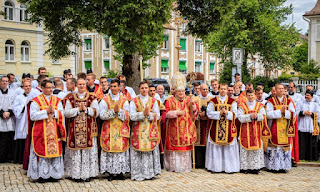 The priestly ordinations of this academic end of year were conferred on Saturday, July 1st in the parish church of Lindenberg. The pontiff was His Eminence Cardinal Raymond L. Burke, cardinal-patron of the Order of Malta.