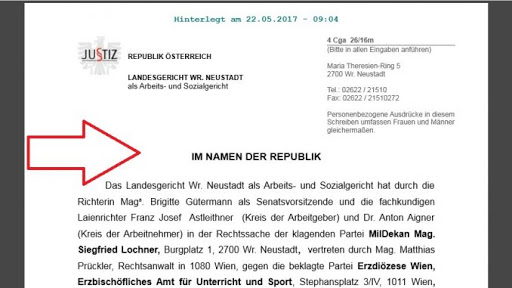 Military Chaplain has employment as religion teacher reinstated. Archdiocese of Vienna condemned.
Ed: we are reminded of Zita's intervention when Cardinal Rampolla was elected. Didn't Schönborn pay the judge?
(Vienna) "What is going on with the military diocese?" In Austria, this was the title of an article on January 25, 2016. The reason was the drastic interventions by the new militaryBishop  Werner Freistetter. Because of his dismissal as a religious instructor, Military Chaplain Siegfried Lochner even had to intervene with the Labor Court. Now the Archdiocese of Vienna has been condemned.

Bishop Freistetter took office on June 11, 2015, and was in a hurry to destroy working structures. This included in the first place the dissolution of the time-honored military parish at the traditionally rich Theresian military academy in Wiener Neustadt.
The military bishop announced an "intensification of pastoral care" after his appointment. In the meantime, the opposite has taken place.
The dissolution of the military parish had primarily to do with the then pastor of the Militärakademie, military Chaplain Siegfried Lochner. The military dean, the rank of a colonel, is a fervent priest. Lochner takes seriously the claim of Ecclesia militans. He cultivates and promotes not only the traditional form of the Roman Rite but also maintains an open and clear word. 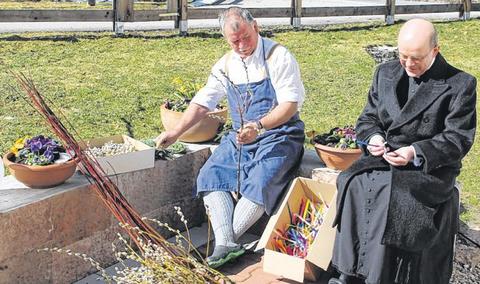 Lochner in his native Bavaria
In these times smooth acclimitazation exercises are characterstically not particularly in demand. In the "colorful" Church almost everything is welcome, but just almost. Lochner is accused of having been a supporter of Heinz-Christian Strache, the President of the Austrian Freedom Party, for the Leftist smart set it is an unpardonable "case of sin.". Strache is one of the three prospective successors to the President's office during the parliamentary elections next October, alongside the Social Democratic and the Christian Democratic Federal Presidents.
On October 1, 2015, however, it was over. Military Deacon Lochner was moved from Wiener Neustadt. Since then, the military parish hardly exists.
One of the peculiarities of the new military bishop is that the former Vicar General, who  is a priest holding the rank of general in military service law, has been given to the Protestant military chaplaincy service (!).
At the beginning of 2016, Chaplain Lochner was also denounced as a teacher of religion by the Archdiocese of Vienna, his second employer, and no salary was paid. Whoever has made himself unwelcome will feel the hardness.
Lochner was disabled for some time because of illness. The archdiocese took advantage of this circumstance and declared the employment relationship to be terminated on the grounds of illness-related disability without pronouncing a dismissal. On the other hand, Lochner complained to the Labor Court and has now set all  right.
On 22 March, the regional court of Wiener Neustadt made a clear judgment, which was filed on 22 May.
It is "undisputed," the verdict says, that the service relationship between the Archdiocese of Vienna and Mag. Siegfried Lochner continues. For this reason, the Archdiocese of Vienna was also "liable" to pay Lochner's litigation costs.
This was justified by the Court of First Instance "with regard to the complete prevailing of the plaintiff."
The question of how ecclesiastical hierarchy is dealing with an unloved priest, who apparently does not want to fit into the image of the "colorful" Church, remains unresolved.
Text: Martha Burger-Weinzl
Image: Private
Trans: Tancred vekron99@hotmail.com
AMDG
Posted by Tancred at 5:20 AM

I think this shows not only the contempt the Austrian government has for the liberal filth the Catholic Church has become over the last 50 years, especially these last 4-5 years under Francis, but also their contempt for the whole liberal Catholic establishments(priests,bishops, and Schoenborn. Schoenborn is a joke. Some of the rad liberal Catholic newspapers here in the USA are proclaiming him the next Ppe already!
But more than that, I think it reveals an underlying hatred and contempt of the faithful Catholics not only for Schoenborn and the way the Church has gone, but also for Pope Francis. Bergoglio is not as well loved...or even liked...as much as the neo-con, liberal Catholic, and secular USA press try to paint him as being.
Damian Malliapalli

This post seems to be carrying concealed hatred for Catholic and well...could be wrong, but in some way for the Pope as well... not a pleasant feeling