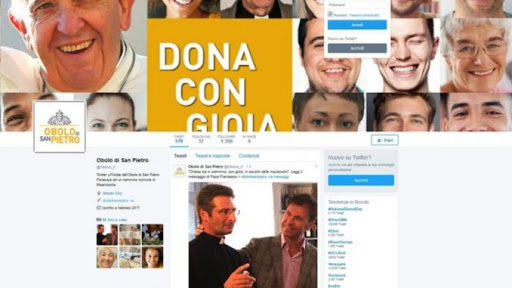 (Rome) The origin of the Denarius Sancti Petri, better known as Peter's Pence, dates back to the 8th century. This donation, collected around the high festival of the Apostles Peter and Paul, is reflected in the collection from the world, expressing the faithfulness of the faithful to Christ's representative on earth. The Peter's Pence can also be donated via the website of the Vatican. There was a surprise yesterday.


"Peters Pence is an economic contribution, which believers use as a sign of their affinity with the manifold tasks of the Successor of  Peter to support his concern for the needs of the universal Church and for the love service to the needy. "

The responsible Vatican office takes advantage of the Internet and is also active on Facebook and Twitter. The motto of Peter's Pence has become "Give with joy".

Yesterday, the Twitter account appeared with a photo of the Polish ex-priest Krysztof Charamsa and his gay life companion was advertised.

On 3 October 2015, shortly before the beginning of the Second Bishops' Synod on the family, Charamsa "outed" himself and demanded a recognition of homosexuality by the Church. He accused the Catholic Church at a media press conference of "discriminating" against homosexuals. Charamsa was then released from all tasks at the Vatican, where he worked for the Congregation for the Doctrine and the Faith. His Polish home bishop suspended him from the priesthood.

The ex-priest wrote a book that has already been translated into eight languages ​​and published by the largest publishing houses. Whoever represents the "right" opinion is encouraged.

The photo, which was published yesterday on the Peter's Pence account, comes from the press conference of 2015. The picture remained a few hours on the net and was then removed. The Vatican press office apologized for the incident, stating that the administration of the Twitter account had been outsourced. Which PR agency or association it manages was not said.

But it was hardly a mistake. At the same time, Google has been advertising  in innumerable ways directly or subliminally for homosexuality. Yesterday, for example Google included the omnipresent homosexual flag and the reference to the 66th (!) Birthday of any homo activist.

The message, published on Twitter along with the Charamsa-Photo, read:

"The Church is joyfully on the way to hear unrest."

The passage comes from the morning sermon of Pope Francis from the past May 4th. On the following day, Osservatore Romano published a summary:

"That is the other key concept, the second step: the Church, which understands to hear, the Church, which knows that there is a disturbance in every heart: all men, all women have a restlessness in the heart whether good, bad or ugly, but this unrest is there. Listen to this unrest. One must listen to what people feel, what the heart of these people feel, what they think. Even if they think wrong things, because it is necessary to understand well where the unrest is. In fact, we have all the unrest in us, and the Church must find the unrest of the people. "

Yes, there's always an "error" or a mistake, when they represent themselves accurately and are occasionally called on it. Otherwise known as "woops!". But it's all part of the parade to full-throated cheers for what many of them participate in, and about which they wish to find approval from God, if they believe in Him at all.
The Catholic Church, as we knew it, is no more.
There is only the remnant, and we must find all find it.
Lord, come to our aid soon.

I forgot to say, we switched to Bing as our browser, and it's worked out fine. No more annoying Leftist graphics, we aren't supporting an increasingly intrusive corporation, and, Google can't "track" us anymore, which they are now doing with ever increasing regularity, to all of us. They are now tracking what you search for and look at, probably comments, and selling that information to someone, other companies, etc.
No thanks to that. Go to Bing. We don't notice any difference.

The filth in the Vatican is of the Diabolical.Lord come to our aid.

Stinking Pope Francis and his filthy agenda and crew.

I would never give a penny to Peter's Pence...not until we have a true Catholic Pope again.

Clean house. Out with Francis, in with a Catholic Pope.
Damian Malliapalli

It all goes back to Vatican II.

Officially it started in 1951 with Pius XII.
Yes there were bad things going on before 1951.
With that said,the ancient traditional Easter Vigil being "changed on an experimental basis" in 1951 was the first official change.
Pius X changed holy Communion/confirmation age,receiving Holy Communion during
Holy Mass,and other popes pre-Pius XII changed minor rubrics.
1951-1958 was 7 years of unprecedented monumental horrible changes.
Vatican 2 was the last phase of the revolution.

Francis is a symptom not the cause.

This is true. The guy who was at the root of all the 1951-58 changes, was the same guy who with his team, created the Novus Ordo Missae....the garbage replacement for the Latin Mass the Church has suffered with since 1969..and the results have been catastrophic. His name was Annibale Bugnini. His chief disciple is the now seriously ailing after a major stroke, Archbishop Piero Marini.
Bugnini concocceted the 1951-58 changes, and during the opening phase of Vatican II, was in charge of reforming the Liturgy. John XXIII (to his credit), got wind of the kind of person Bugnini really was (radical liberal, inspired by Protestantism with regard to worship), that John XXIII sacked him. He was removed from everything and sent packing. Shortly afterward John XXIII died.
Paul VI , very underhandedly, brought Bugnini back. He was placed in charge of the reform of the Liturgy. When, after only 1-2 years the world-wide reaction to the Novus Ordo was nothing like Paul VI hoped. He labeled Bugnini the culprit and sacked him again, making his Nuncio to Iran ( a real humiliating downgrade) in 1975. He tried to play the hero and rescue the 57 USA hostages in Tehran in 1979, bu his negotions failed, John Paul II retired him, and he died in disgrace in 1980 at 70.
Damian Malliapalli

I believe that Bing which is owned by Microsoft can and does track. You might want to check on that..... Bing doesn't yet partner with disgusting ads, tho. www.DuckDuckGo.com is the only search engine - that I know of - that not only doesn't track, it even lacks the hardware to store and thus track your searches.

Women will be the salvation of the Church. The Mother of God and Mary Magdalen and a few others were the only ones who stood at the foot of the cross. The rest went and hid under a rock.

Either the Peter's Pants people are incompetent bunglers (don't those idiots know that their website is the face of their organization? oh.....uh....OF COURSE THEY DO!) or they are craven subverters of another charitable organization.

Either way! My money is very carefully given to extremely well-vetted charitable groups. The rest can go straight to hell!

Bugnini was exposed as a freemason: Strong and obvious proofs of this were given to Paul VI who had no other choice but to dismiss him though he himself had ties with the .:FM
The Novus Ordo mass, the "ordinary form", the most widespread one, is a masonic construction!

I ask this in all due respect and in no way am I being sarcastic or rude.
Why do so many Roman Catholics give Pius XII a free pass & blame it all on Bugnini?
Pius XII changed (destroyed) some of the oldest traditions in all of Christendom,including the Immemorial after Midnight Holy Communion fast,Holy Week,(1951 & 1956)omitted ancient feast days of Apostle Saints for Communist worker May Day,and much much much more damage 1951-1958.
Pius XII was the one who APPROVED the "New Liturgical Change Committee" in 1948!!!!!
He praised the U.N. as
"A great hope for Mankind" (1956) while being smart enough to know who/what the U.N supported and hoped to achieve.
Please do not take this personal.I am just trying to discover why Pius XII changes are "Good" and everyone else's changes from 1958-2017 are "Bad"?
Yes Novus Ordo Watch.org,I am referring to you!