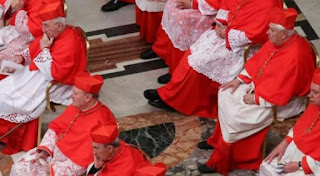 (Rome) Only six months after the recent consistory on the creation of new cardinals, Pope Francis announced yesterday the next cardinal appointments. Such a short-term succession of cardinal appointments was the last thing that happened in 2012 immediately before Pope Benedict XVI's surprise resignation.
The announcement made by Pope Francis on Sunday said that he felt an urgent need to appoint new cardinals who were eligible for election in an imminent conclave.
The full number of the papal electors currently stands at 120 cardinals who have not yet reached 80 years of age. At present, this includes 116 cardinals. In the first half of 2018, seven current papal electors will leave for reasons of age. Then the number will remain constant until the end of January 2019. With the five new cardinals, 49 of the 121 pope voters will have been appointed by Francis.
With the announcement of the creation of five new cardinals, Pope Francis will even slightly exceed the full figure for eight months.
The Cardinals' Consistory was announced by Francis for the 28th of June. Of the five new cardinals, four come from the margins:
Msgr. Jean Zerbo, Archbishop of Bamako (Mali)
Msgr. Juan José Omella, Archbishop of Barcelona (Spain)
Msgr. Anders Arborelius, Bishop of Stockholm (Sweden)
Msgr. Louis-Marie Ling Mangkhanekhoun, Apostolic Vicar of Paksé (Laos)
Gregorio Rosa Chávez, Auxiliary Bishop of San Salvador (El Salvador)
Three of the five new cardinals are from the Diaspora, which is why the question of the representation of the Cardinals from countries and dioceses, which are hardly known to Catholics (Mali, Sweden, Laos), have been raised. Whether the periphery or the center ( Pope Francis allows for an overweights from the periphery once again), a "Bergoglian" identity is common to the appointed men.
Above all, the appointment of an Auxiliary Bishop to the Cardinal raises questions. The reigning Archbishop of San Salvador is younger than his auxiliary bishop coming to the purple. Monsignor Rosa has been an auxiliary bishop since 1982 and was appointed by Pope John Paul II. Archbishop José Luis Escobar Alas was appointed in 2008 by Pope Benedict XVI.
In the Cardinal, and thus to his advisors, the Pope can appoint whom he will, but the elevation of Monsignor Rosa is at least unusual. Auxiliary Bishop Rosa is the oldest of the new Cardinals at 74 years.
On the 28th of June there will be a total of 227 cardinals.
Text: Giuseppe Nardi
Photo
Trans: Tancred vekron99@hotmail.com
AMDG:
Posted by Tancred at 4:15 AM

If the four Cardinals had kept their pledge to issue the formal correction after the Christmas Season we may not have had these new appointments. In fact, we may have had a new & Traditional pope to represent us in Fatima & lead the faithful in the celebrations there. I hope they will reflect on their loss of courage & at once issue this much needed correction. The heresies, blasphemies & degradation emanating from PF & his cronies must be stopped in the name of God. They must reveal their loyalty to Christ in this final battle!

Catholics should flood the mail of highly placed prelates such as Cardinals Burke and Sarah with letters, urging them to gather cardinals and bishops into an imperfect council to deal with papal heresy. The more letters they receive in that spirit, the greater their psychological impact on them could be and the sooner they might gather the courage to move forward and initiate the divinely granted procedure. The destruction of souls in the flames of Tartarus must not be enabled for the sake of a cursed false peace. It is better for the wellbeing of the Church that schisms arise at the hands of heretics, forging new sects and separated episcopal communions, than that subversives remain in positions of authority within the true Church. They must be cast out of the organism of the Church, so that it can restore itself, and this must begin at the top, with Pope Francis.

Saint Augustine, speaking of those who become severed from the Church through crimes against the Faith: "Ex nobis exierunt, sed nolite tristes esse, non erant ex nobis" - "They went forth from among us, but be not sorrowful, for they were not from us." The subversives within the Church are still among us; they are still members of the Church, even exercising authority within her; but their hearts are yet far from her, and it is necessary that this filth be ejected from her wounds, so that they can heal. That is why, historically, when the Pope of Rome was cleaning up his garden, he would throw the weeds, that is, those who subvert the Faith, over the wall, and that is why sects like those of Protestantism have always received the vilest cancers that were ejected from the midst of the Catholic Church. The time has come for the garden to be made clean again, and for the weeds to be thrown over the wall!

I know as good as nothing about the five bishops now designated for the cardinalate, so I am not writing this with them in mind, but the situation of the Church in general.

After watching video of Fulton J. Sheen, the following must be said. This is a battle of the "God-man" vs. the "Man-God". Does man make the rules or does God? Abortion is against the natural law as is same sex marriage. The argument from those around PF is that Christ spoke in his day and time and in his context. The rules were for then and we have new rules for now which are contained in "Amoris Laetitia" translated as the rule of the "Amorous Laity".

Oh that Pope Francis! He's so clever, so prudent, so Machiavellian (in an obvious sort of way). But I wonder if he remembers that the only time God
laughs in the Bible is when He contemplates the machinations of the powerful who have taken counsel against the Lord. 'He that dwelleth in heaven shall laugh at them: and the Lord shall deride them' - Psalms 2:4

Page 117, of the pope's book, On Heaven and Earth, in regards to same-sex unions
“If there is a union of a PRIVATE NATURE, THERE IS NEITHER A THIRD PARTY NOR IS SOCIETY AFFECTED. Now, if this union is given the category of marriage and they are given adoption rights, there could be children affected. Every person needs a male father and female mother that can help them shape their identity. - Jorge Mario Bergoglio
Approval of same-sex sexual unions is approval of same-sex sexual acts.
Prior to being elected pope, Jorge Mario Bergoglio, by condoning same-sex sexual acts in relationships that he referred to as private, did not include children, and were not called marriage, denied the Sanctity of the marital act. To deny the Sanctity of the marital act, is to deny that God, The Most Holy And Undivided Blessed Trinity, Is The Author of Love, of Life, and of Marriage, and thus deny Salvational Love, God's Gift of Grace and Mercy. To deny The Divinity of The Blessed Trinity, is an act of apostasy.
The election of Jorge Mario Bergoglio is not valid.

Can anybody clarify the comment about "urgency" and an "imminent conclave?" I have looked at the press office material at the Vatican site, and there is no Papal verbiage that uses these words or intimations in the naming of the Cardinals, at least in the official text.

I think Francis knows he is not going to be here much longer. More than that, I think he is certain that he won't be. That's why he did this. Either he is ill....and he's not saying anything....or he's going to resign and try to stack the deck before he goes.
Either way, I hope his plan fails. I hope none of Francis' men are elected in the next conclave....probably in less than a year....instead, I hope we get a Catholic. And maybe a traditional minded Catholic to boot!
Damian Malliapalli

The curious thing is that 3 of them studied in Belgium, Lovanio....... mere coincidence?

An Argentinean told me in 2013 that there were rumors in his country about Bergoglio allegedly saying that he had been given four years to do all that he wanted to do. We are Anno Domini 2017 now, so it is remarkable to say the least to see this talk emerging about a possible abdication by Pope Francis.

It is possible that an abdication in 2017 had already been planned years beforehand.

Rorate Caeli called it stacking the deck for a non-white and non-European Pope.
The left - the Yahudis must have their candidate all picked out and ready.
They don´t want discussion of the next Papal Conclave on the so called Catholic Forums that they control pretending they are run by Catholics when in fact run by Rand Corporation.
8o% of Catholic Forums and some blogs are in their control. Those that are not they will send a herd of trolls and bots to control content. Tracy from Fisheaters does not exist, Matthew from Cathinfo does not exist, Padraig from Mary Mother of God does not exist which is run out of Israel, etc...

To Anonymous 4:23 AM. Where did you get your information about Catholic Forums being controlled by other entities? I am curious. This is interesting.
Jeannette

Evidently the Bishops of the Catholic Church fear men alone, for if they feared God they would care only of God's House, which is being defiled. THere is no Phineas hardly (just a handful of quasi Phineases) that is moved to defend God's House with requisite zeal. Just think of the blasphemy and sacrilege going on daily! This is The HOUSE OF THE LORD which is being defiled by the vilest devil-filled modernists and not hardly a soul except in the lowest orders and the laity have enough zeal to move a finger. The HOUSE OF THE LORD should weekly be purged and swept clean, "but ye have made of it a DEN OF THIEVES!"

Okay..... Can I tell you guys something ? I don't think you can really describe this group of new Cardinals as " Modernists " or " Orthodox." Why ? For example, a Bishop of a Area that is not even a Diocese aka The Apostolic Vicar of Paske, Laos...... I mean where the heck is that ?