6,000 Police and Sharpshooters Protect the Pope 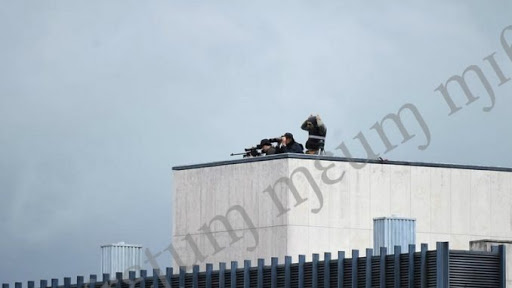 (Lisbon) The Portuguese government is taking security precautions for the Pope's visit to Fatima seriously. The Catholic Church head is  in Fatima. There, on the occasion of the 100th anniversary of the first apparition of the Virgin, Francis will celebrate a Pontifical Mass, and sanctify the two seer children, Francisco and Jacinta Marto.

Portugal has not only concentrated strong police units in Fatima and secured the access to roads to the pilgrimage site with large concrete blocks. On the roofs around the sanctuary, snipers are posted. "The great square in front of the pilgrimage churches, with all the restraint of the security forces, looks to the attentive observer, like the forecourt of the Western Wall, which is constantly being watched by Israeli snipers. Each sniper position consists of three men. Two observers with binoculars and a shooter," said a Fatima pilgrim.

The concrete blocks were already set up at the beginning of the year to prevent an assassin commandeering a truck  and driving it into the crowd, as most recently followers of the jihad militia Islamic State (IS) did on the Breitscheidplatz in Berlin and before in Nice.

A total of 6,000 policemen are deployed in Fatima to guarantee the safety of the Pope and the many pilgrims who have come to the Shrine to mark the 100th anniversary of the Marian apparitions and canonizations. Helena Fazenda, secretary general of the Interior Ministry has said that there were "no elements" that are expected to lead a possible terrorist attack.

Absolutely PATHETIC. The holy place where the three little shepherds played and sang hymns to our Lady and obeyed our Lady and gave their young lives to prayer surrounded by snipers ready to blow you away if you sneeze the wrong way.
Godless, faithless Rome, we KNOW the secret, apostasy starting AT THE TOP, a BAD council, a BAD mass and finally horrendous chastisements. Don't worry faithless Rome, it won't be today, just wait until October and then the rest of the secret which you kept from the faithful will be fulfilled.

I am more of a believer of the LaSalette apparition. In LaSalette, Mary says straight out that "Rome will become the seat of the AntiChrist". Rome played down this apparition. This is not to say Fatima was not genuine, but the Secrets are not understandable. Had Russia converted? What is the nature of the conversion? Why is the " Dogma of the Faith" that Portugal is supposedly preserving, not as preserved in Rome? All Western Countries have gone down the same secularist and Islamic Road.Why does Fatima need deadlines, such as 1960 to reveal a secret. I don't like the obsession people sometimes have in trying to predict the future. I am more worried that the SSPX leadership may perhaps be basing agreements on alleged interpretations of this prophecy. Prophecies, for me, are not things which must occur, but become useful after the event occurs, so that later, people can reflect on the fact that God was always aware and in control.

yep, that's about exactly the sound you'll being making when the SHTF too, maybe "Pope" francis will pray for you then.

Such a waste of time and money to protect Francis. I feel sorry for the money spent and effort of the police when they could have spent their day in more useful assignments.
Damian Malliapalli

What's almost the worst part about this is the atheistic sedes who think the church has been destroyed and wallow in their despair.

"sedes"? LOL Did Pope Benedict pass away? Keep following and believing in the fairy tale that is Francis Tancred. Have you ever bothered to read anything about Fatima? You might want to look into it one day soon.

Haha, waaaa on you fool, La Salette was not condemned, one message was put on the index (which no longer exists) by a notary at the Vatican. Coincidentally the message (like Fatima) implicates the hierarchy of the Church. Ignorance is bliss huh Tancred? lol Try google sometime.

Partly the condemnation of the vision and the generally unhinged, rabid, vulgar, even demonic and nasty demeanor of those who subscribe to it.

LaSalette appears for me to be more appropiate for our time, and less ambiguous. Unlike LaSalette, Fatima does not identify exactly Rome as becoming the "seat of the Antichrist", but leaves it open-ended, with general call to penance. LaSalette identifies exactly "monasteries and convents as dens of iniquity" and prophecies the pedophilia crisis in our religious orders. Fatima prophecies, by contrast, are prophecies that were more relevant for a World War 1&2 and Cold War era. Fatima was more easily accepted because it did not propose papalotry as a problem.At the time of LaSalette, Popes were generally defenders of the Faith, and were not expected to be enemies of the teachings of the Church.Its view of the future popes was considered disrespectful of the Papacy. No one at that time would have immagined a Pope opposed to the defense of natural and divine law.
Given the perspective of the time, it would seem rational to condemn LaSalette. But we have been experiencing the perversions and betrayals today that at one time would have seemed unthinkable.

Respectfully, the La Salette apparition itself has been approved as worthy of belief (and therefore *not* condemned), although some versions of what happened have caused controversy:

"CLARIFICATION: To circumvent any misunderstanding - let me make it clear that I concur with the Bishop of Grenoble's decision regarding the original apparition of the Blessed Virgin Mary at La Salette in 1846, that the apparition is "worthy of belief." The intent of these articles is to demonstrate that a) the true message" and/or b) "the secret" of La Salette does NOT form an integral part of that Bishop's (or the Church's) approval. The false message or secret suggests that the BVM prophecies that "Rome will lose the Faith...etc.". This rumor is an 1879 corruption of the original and legitimate message recorded in 1851. This corrupted 1879 "message" and/or "secret" has been absolutely condemned by the Church. The official condemnation culminated with the false message of LaSalette being placed on the Index of Forbidden Books, the questionable Imprimatur of 1879 supposedly granted by the Bishop of Lecce notwithstanding. - F. John Loughnan" from http://www.unitypublishing.com/prophecy/fake-salette.htm