(Rome) This year's Good Friday meditations at the Pope's Stations of the Cross, which traditionally take place at the Coliseum in Rome, are by the French theologian Anne-Marie Pelletier. The well-known alumna of the Institut Européen des Sciences des Religions (IESR) in Paris is not an unknown person.

A larger circle was announced in 2014, when the Joseph Ratzinger Prize was awarded. The prize has been awarded since 2011 by the Vatican Foundation Joseph Ratzinger - Benedict XVI. "For special scientific-theological services in the context of contemporary discourse." The foundation was established in 2010 by Pope Benedict XVI. In the first two years, Benedict XVI personally awarded the prize. He also renounced his participation. According to the foundation, the prize is awarded by a board of trustees, but "in consultation" with Benedict.

Anne-Marie Pelletier was the first woman to receive the Ratzinger Prize. She was particularly honored for her studies on "Woman in Christianity". Cardinal Müller, who presented the award in 2014, spoke of an "outstanding figure of today's French Catholicism." In addition to the IESR, Pelletier also teaches at other academic institutions, including the Jewish Institute Universitaire Elie Wiesel. She is a member of the French Association for Bible Studies (ACFEB) and a member of the Institut Lustiger.

In May 2015 she appeared in the list of some 50 participants in a secret meeting, which took place on the day of Pentecost at the Pontifical University of the Gregorian in Rome (see The Church's "Illuminati" - List of Catholic Secret Members). The list reads as Who is Who the Kasperians. The secret meeting was to prepare strategies to bring about a coup in the October (upcoming) bishop's synod on the family. The objectives were: to admit married couples and homosexuals to the sacraments. In summary, the "Pastoral Innovation", as the Vaticanist Edward Pentin wrote from the National Catholic Register, was the goal. 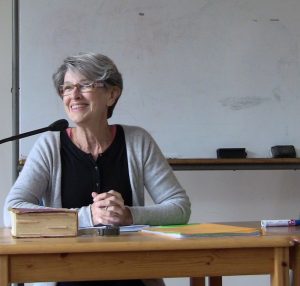 The latter was not without piquancy, since St. Gallen in 1996 was the meeting point of the subversive, inner-Church secret circle, which named itself after the city. The secular group founded by Cardinal Carlo Maria Martini (then archbishop of Milan) had its predecessor, Bishop Ivo Fürer, but the success of this tradition was continued by Markus Büchel. The invitation was of course only informal, because officially it was only a private meeting behind closed doors.

The invitation by the two presidents of the Bishops' Conferences of Germany and France reveal the "Rhenish Alliance," which was of considerable importance for the Second Vatican Council.

The list of participants reveals planning with military precision: not only Church representatives and theologians met. Among the invited guests were selected representatives of leading media such as ZDF, ARD, FAZ, NZZ and, of course, La Repubblica, the daily newspaper of Eugenio Scalfari - according to Pope Franziskus, the "only" newspaper he regularly reads. Pentin then pointed to Pelletier's view that the Church needed "a dynamic of mutual listening" by guiding Magisterium's conscience "and echoing of what the baptized say."

As Pentin reported, Pelletier also argued that the bishop's synod was "condemned to failure" when "simply reaffirming what the Church has always taught." A definite conception of the party. It is now a particularly rare honor for Pope Francis.

She is part of the false church being set up by the pope and his minions. Perhaps she will be the first female 'cardinal'?

There is a great deal of uneasiness associated with this papacy and each news chunk adds to the malaise.

Not surprising then the Synod results & Amoris Laetitia.

Cf. FREEMASONRY and the VATICAN: Synod Fathers believe the spirit of "the illuminati" is in the Instrumentum Laboris - http://torontocatholicwitness.blogspot.com/2015/10/freemasonry-and-vatican-synod-fathers.html

They'll never be able to make the Church one with the world, never going to happen, not all the Bergoglios ini the world will make it happen.

She, and he(Francis) and all like minded, are heretics. Plain and simple.
Damian Malliapalli