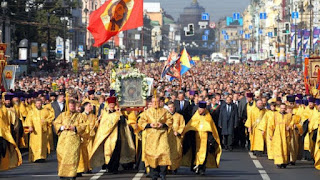 That would bring a tear to your eyes ,of joy for the Russian people ,and sadness for what has been taken from us in the west .

What a miraculous scene one hundred years after the 1917 Revolution! We must hope for similar miracles in the West.

Despite his many faults, both real and imaginary, Vladimir Putin has done a lot in restoring pride in the Russian people, pride for their country, their traditions, their history, their religion.
He also would very much like to restore something else in Russia, which many believe WILL happen before a few years are out...not so much for a historical sense, but again, out of Russian pride. Also because there is a growing movement among the people for it's return. That is the return of the Russian monarchy...the Czar ...and the return of the Romanov family. This time however, the Czar won't be an an absolute autocrat. He will have real power...much more than the British monarchy which are largely ceremonial....but there will also be the elected bodies of representatives...and Putin himself...who will wield substantial power.
Russia is returning to their religion and tradition with great pride. It is wonderful to see. Too bad the Roman Catholic Church doesn't lean that only a return to Catholic tradition will save.restore our Church, a return of a true Mass, and true Pope. Not the fabricated/iconoclastic protestantized Novus Ordo, or a Pope who now is contemplating married priests....not a Pope like Bergoglio. But more a Pope like a Pacelli or Sarto.
Damian Malliapalli

Hoopla about transfering of St. Isaac Cathedral to R.O.C. and cultural war in Russia:
http://www.interfax-religion.com/?act=news&div=13587

http://www.interfax-religion.com/?act=news&div=13602
Condom factory across from Historic and Holy Shrine?
http://www.rferl.org/a/russia-condom-factory-bogolyubov-orthodox-protests/28159870.html

On June 13, 1929, in the Presence of the Most Holy Trinity, Our Lady said to Sister Lucia:

"The moment has come in which God asks the Holy Father to order and make in union with all the bishops of the world the consecration of Russia to My Immaculate Heart, promising to save it by this means."

"Make it known to the Holy Father that I am still awaiting the consecration of Russia to My Immaculate Heart. Without the consecration, Russia will not be able to convert, nor will the world have peace."

Please check out www.fatima.org. They're the best resource on Fatima.

And it is precisely that return to its Christian roots---advocated, whether sincerely or not, by Putin---that the globalists in the West cannot and will not forgive him. Hence, all the lies and exaggerations and demonizing we constantly see in the press, including the so-called "conservative" press. Jailing the blaspheming and sacrilegious "P__y Riot" was the ultimate offense for these miserable monsters. They would love nothing more than a full war with Russia which has not provoked the USA---they are that evil.

I don't think there is anything more breathtaking than a full, traditional Pontifical High Mass/Coronation of a new Pope. It outdoes this beautiful Russian ceremony. I've never seen one, of course, but my uncle has our family film library where we have about 100-200 films now made into dvd's of events my grandfather took when he was working in Rome (1951-63) as a professor of East Asian History and Art History. Then he taught at Harvard (1964-87), and at the U of Pennsylvania in Philadelphia(not Penn State) from 1987-98 and then retired. But he made tons of film coverage of Pope Pius XII including the very last appearance of Pope Pius outside the Vatican (Castel Gandolfo, Oct. 1, 1958), as well as the coronation Mass of John XXIII (abou3 hrs. worth), his death, and the election of Paul VI. Tons of clips of monks, nuns, crowds, etc.
But a Papal coronation would outdo this Russian procession. Sad what we have lost. But easily brought back when we have a real Pope open to it. Benedict XVI tried to bring back some, and the liberals like Bergoglio mocked him for it.
I do believe (because I'm still young), that God willing I miay see both a Papal coronation again with a new Pope , and also a return of the Czar in Russia.
Don't believe all the anti-Putin garbage you hear in the USA press....mostly the liberals, but also people like McCain. Putin is a thug, it's true....but he's done a lot for restoring Russian pride in the way things used to be (not Communism, but rather Imperial Russia). North Korea is who we have to demonize.....not Putin and Russia.
Damian Malliapalli

When I saw this crowd in the tape, processing down the street with all the priests in beautiful vestments, all I could think of is the annual Corpus Christi procession with the tens of thousands of faithful, nuns, friars, priests, bishops and Cardinals. Then I thought of our worthless Pope, Bergoglio, who doesn't even participate in it, but makes an appearance at the end. Big deal.
I bet he would never participate in something like this either.
Damian Malliapalli

I know a traditional bishop who consecrated Russia to the immaculate heart last May.
He is know dying & giving his life for consecration of Russia and the Roman Catholic church.He is celebrating holy sacrifice of the mass daily and literally suffering and dying.
Its very humbling and touching to witness this man.
After he dies I will give you his name.Until them mum is the word.If I am not mistaken,a few traditional bishops (sedevacantist although he hates that term) did the consecration simultaneously in their respective cities.
He said they are doing this because no one else cares or is trying.He is hopeful but doesn't dare play the role of prophet.
Only time will tell if he and his fellow emergency bishops were/are successful.

Damian Malliapalli, It would be great if your family would get the copyright of all the footage your grandfather took and make them available for the world to see. Many would see what we actually lost due to the Modernist heresy. Catholics would be demanding it back. I watched the Coronation Mass of St. John XXlll on you tube. I was astonished. Never seen the likes of it.

If the orthodox would reunite with the catholic church we would suddenly have over 100 valid traditional Bishops and everyone would stop sweating the future holy orders or traditional priests/bishops.

"Salvation will come from the East"

Fr Malachi Martin said this many times over the years.

The message of Our Lady of Fatima tells the triumph of Christ over the evils our age.

In the end my Immaculate Heart will
triumph.

Russia apparently will be and has been an instrument of God's will.

Those of us who lived through the Comd War have prayed but certainly
are pleased to see the face Our Lord and Our Lady paraded publicly through the streets by and with govt officials.

We have seen American govt and civil society come unglued yet the so-called 'enemy'allows for teaching christianity in public schools.

God's grace can rebuild Holy Russia
and if so they may be called by God to scourge or evangelize the world.

Sometimes that is difficult for Western ears.

Savoiur of the world, save Russia
and America.

Spasitel mira, krome Rossii
Saviour of the world save Russia