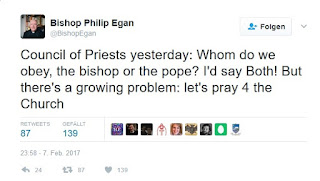 "Whom do we obey, the bishop or the pope?"

Francis is changing the moral code and intimidating all of the bishops into acceptance. The new code is based on Amoris Laetitia which espouses adultery, promiscuity, and fornication. That is the truth of his agenda and "the king has no clothes".

And Francis is just getting started: deaconesses, females "priests," married clergy, blessings of gay unions (or "marriage" by some euphemism), etc. Not all, granted, of equal gravity or doctrinal value. We have a monster in our hands.

In todays Church nothing is as it seems. The faithful can only know each other by the faith that one proclaims. If you hear a false Gospel proclaimed, flee that place for it is not from God.

We also need to pray for Bishop Egan. Giving shelter to the FFI as he has done has been enough for at least one other Bishop to get the sack. Remarkable things are being done in his diocese.

Bishop Egan seems to be a true Catholic, which is remarkable in this time of the rank heretic Pope Francis. Let's pray for him and other bishops to have the courage to stand up to the juggernaut of the false Pope and his associates. Francis' agenda can be derailed by the opposition, protests, and visible witness of the faithful Catholics against him.
Damian Malliapalli

I hope there's more posters and protests against Francis this Sunday in Rome, and every day till he's gone.

Let's pray for this good Bishop. No doubt he will soon be "retired" long before the retirement age, and replaced with a piece of garbage like his neighbours Nichols or Smith.