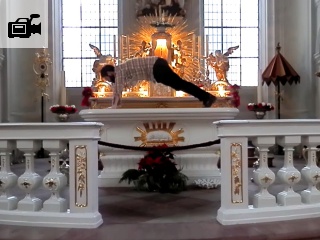 It's just a Cranmer table but were I there I would still physically mess this guy up, just fair warning, anyone tries this at a Catholic Church I'm in and I will jack you up to the best of my physical ability.

"The video, entitled 'Pressure to Perform,' was designed to investigate the extent to which religion and performance pressure were related...a fine of 1500 Euros at the Court of Justice... appeal.. Court of Saarbrucken decided... a 700 euro fine..."

Maybe if he had used an insanity defense he could have gotten off scot-free.

Judge Simon? Slap on wrist because attacking Catholic Church it is open season. Let that deluded ¨artist¨ try that stunt in a Mosque or Synagogue. Perhaps Judge Simon would give a far harsher penalty.

He's a "performance artist" so the insanity bit goes without saying.

Wouldn't be at all surprised if he's acquitted on appeal or at least if the fine is greatly reduced.

Turn the other cheek...except when a hammerhead is committing and filming sacrilege. I LOL'd at your comment!

In London in July 2005, there were four simultaneous and unsuccessful suicide attacks in various locations. All FOUR wannabe mass-murderers made good their respective escapes (but were thankfully all captured in the following days). I remember a commentator saying at the time that if the same thing had happened in New York for example, the brain-dead bombers wouldn't have got very far before having their mobility severely reduced. I'm guessing you're from the US! (I won't ask what 'jacked up' means but I would imagine it would make the recipient wince).

I don't believe this is the total fault of this guy. After all Modernism programmed us to believe that the house of God is just an ordinary building. If this guy is taught by a Traditionalist about the holiness of Catholic sacred buildings and does this again then hang him. It is my opinion that we are placing the fault on the wrong person. We must demand Modernist heretics to stop their blasphemous and sacrilegious teachings and practices.

"I did not want to make fun of the Catholic Church or hurt the feelings of believers."

You hit the nail on the head. If he tried a stunt like that in a mosque/synagogue in the US, he'd go to prison and they'd throw away the key, plus make him undergo sensitivity training (never mind the fact that real Catholics are sensitive to having their churches desecrated [sarcasm]).

Seriously, the fact that he didn't try his stunt in a mosque is proof of sanity.

""I did not want to make fun of the Catholic Church or hurt the feelings of believers." Really?? Would you try that stunt at the front of a mosque you coward? Or would you be afraid of losing your head (literally)? Phony coward.

If he went to prison, he wouldn't last long once the Moslems in the prison found out about him and what he did.

Doubtless this sacrilegious and erroneous activity will find its justification in an Apostolic Letter imploring us to be inclusive, to be mindful of the sacred need to preserve the habitation of the flesh, and to start smelling like the sheep.
Is it really that much of a leap from what we endure?

The conciliar church is in error but when the Novus Ordo heresy is over,these bldgs will once again belong to the Lord Jesus Christ' Catholic Church.
What this boy did is committ the sins of blasphemy & abomination.
The "Bishops" aren't doing their jobs,obviously.To contemplate this act,let alone going through with it,shows just how degraded and demoralized the Roman Rite is in the West.

The Moslems would terrorize him until he converted to their false pagan idolatry.
They are street smart and know an easy mark instantly.