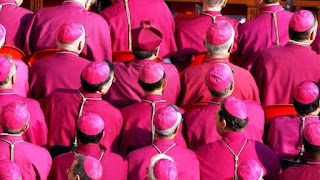 (Rome / Krakow) Pope Francis arrived on Wednesday in Krakow, where he will participate at World Youth Day 2016. There are more points to the program, however. One was an encounter with the 130 Polish bishops from 45 dioceses, which was originally to be held in public and with the Pope's address. However, instead, it is taking place behind closed doors and is in the form of question and answer.

Poland's bishops had clearly discussed in advance behind the scenes, but have really indicated what they really think of the recent document by this pope, the Post-Synodal Exhortation Amoris laetitia: namely, not much. Moreover, they view some passages as dangerous and contrary to Catholic moral teaching and the Discipline of the Sacraments. They had already established themselves against the "new Mercy" at two Synods of Bishops in Rome, believing it is a false compassion. The Apostolic Exhortation that despite these expressions of concern received the controversial points and no less controversial spreads, therefore sparked considerable resentment in the Polish episcopate.

Poland's bishops do not stand alone. In other Episcopal Conferences - leaving aside the Bishops' Conferences of the German-speaking areas - it looks no different, and even in the "Land of the Pope", which traditionally means Italy.

Among Italy's bishops, the Apennine Peninsula counts 223 dioceses, there is considerable grumbling. The majority of the bishops feel ill at ease due to Pope Francis. This not only has to do with the fact that the Argentinean Pope in December 2013, has placed the Italian Episcopal Conference, traditionally very influential in Rome for historical and geographical reasons, under provisional administration by giving her a new general secretary, Bishop Nunzio Galatino, a watchdog who has set the tone ever since. The matter goes even deeper, as the Vatican expert Sandro Magister writes:

"There is among many Italian bishops anxiety with Francis, which is smoldering under the ashes and rarely is expressed apertis verbis." A few days ago Luigi Accattoli, the senior Vatican expert of the Corriere della Sera , published a collection of statements in the Dehonians magazine Il Regno of the Italian Bishops about Pope Francis. It involves personal judgments that Accattoli collected over the past three years, on various occasions, where he came into contact with bishops. Accattoli, "an objective observer above suspicion" (Magister), does not mention the names of the bishops. He does not say who said what. Since they were informal, personal conversations, that would be impossible. The Vatican expert "revealed" that is his intention, in an example from Italy, the anxiety of the bishops about this pontificate, a phenomenon that affects the whole universal Church.

As Accattoli prefaces, only statements from bishops were selected for his collection of quotations, who belong to the "admirers of Bergoglio's apostolic boldness," and are "sympathize with the Argentine Pope." The Vaticanist signals, that he does not want to signal against that the reigning Pope, but will give a general impression, of how the judgments of those bishops who were left out would be, that is, those who do not "sympathize with the Argentinean Pope."

Pope Francis in the judgment of Italian bishops

"I admire his generosity. There was much demotivation in circulation, his arrival was a psychological liberation. But why so much unrest, what is his plan? "

"He blames, urges to move: But where does he want to lead us?"

"I have the impression that he has a bad opinion of us bishops, and I do not understand where that comes. Italy is, after all, the hard core of the Catholic Church: Why does he beats us?"

"I admire the ability of the Pope, and his 'going forth' with gestures of compassion toward the disenfranchised, to the non-believers. But I wonder, what's with all the rest: the Catechism, the Code, the seminaries, the parishes, the state laws that remove more and more from the Christian sense. What is there to say, what to do?"

"But what does "going forth" mean? That's easy to say, but to do? What does this mean in a given situation as in my diocese?"

"He has blocked the slogan of the non-negotiable values, but what has he replaced it with? With half a word, for half a word it is, or perhaps not?"

"He plays on the godparents at Baptism and Confirmation, he says that it is not right to exclude those who live in irregular marriage situations, but then it does not change the existing rules and so it leads us into difficulty with the people."

"The people are constantly contrary contrary: 'but the Pope has said.' In most cases, they have misunderstood, but try just once to convince them. He is quick in speech, but unfortunately, he does not take into account that we are the ones who are in the trenches. It just seems as if he had never been a bishop."

"In Amoris laetitia in paragraph 300, he wrote that the distinction of personal situations should be done in dialogue with the confessor in 'accordance with the teachings of the Church and the guidelines of the bishops': I as a bishop must give these policies? If they haven't been even given by the Pope - I suppose because he hasn't given one. How should I give them?"

"The recent Synod had the question of the ministries submitted to it that could be entrusted to those who live in irregular marriage situations; however, he has to appreciate in Paragraph 299 instead of this request, the matter is simply entrusted to us, we who are under the pressure of expectations of the people."

"In paragraph 122 of Amoris laetitia he explains: 'We must not limit to two limited persons the charge of the tremendous burden to replicate the union in a perfect way that exists between Christ and his Church.' I think that is a thoughtless statement. Let's take a comparison with the clergy? Shall we say that we do not want to charge a priest with the burden to replicate the form of the good shepherd?"

"In the nullity of marriage he has made the Bishops as sole judges, and now the poorest come to me, as if I could handle any case: 'you are the judge, the Pope said.' And all want a fast track."

"What interests the faithful, is Communion. If the decision is made to allow access to the sacraments, they are no longer interested in the recognition of the nullity of marriage."

"With these appointments, he does not follow the usual practice, he decides on the fly. One understands yet that he is willing to oppose careerism and nepotism, but the practice was a lifebuoy to avoid errors. If he is going without a net, then what certainty does he have of not to making mistakes?"

"He takes out a freedom that brings its employees at the curia and the leaders of the Episcopal Conference in embarrassment. For many it is as if the relationship of trust has been lost."

"He beats not only priests and bishops, now he goes so far as to threaten the dismissal of bishops who do not commit themselves to combat pedophilia in the clergy. This foray I really do not understand: This is a tricky terrain. The bishop is a father and must also find a way to be a merciful father, is he not?"

"I understand that he wants to appear poor, but to wear a diaphanous gown through which you can see the black pants underneath, is that not neglect? If we are appointed bishops, we received strict instructions regarding our clothes that we should always present ourselves as tidy. Woe if that is not the case. Does that not apply to the Pope?"

"He talks a lot about synodality, but then he decides everything alone. He says that we must decentralize, but such a strong personal concentration of power, it has never happened before."

Id quod gratis asseritur, gratis negatur.
This is no more than yet another Magister/Nardi ideological beat up by self-interested cowards for a constituency of the lazy minded and easily led.

Lazy ass. Throw in a few third form latinisms and he's got it all covered.

he should work as a hitlery speechwriter. Judging from the dishonest, insincere, inane, cliche babble that spewed from her facial orifice last night, gabriel holger would fit like a glove.

It's so pathetically funny. You could almost hear the love song of J. Alfred Prufrock with "mermaids singing each to each."
"Do I dare to eat a peach? I shall wear white flannel trousers, and walk upon the beach."
Why, yes! White flannel trousers underneath the papal cassock, or you're not properly dressed. This pope - or his tailor - has no fashion sense.

Poland still understands that the Church Christ handed down is what allows on to be free, and not a slave to one's own sinful passions.

This simply verifies what I have posted here before, information I gather from time to time from a friend who is a young nun in Italy, right outside Rome in one of the great little Italian towns. Unlike here in the USA, where there are no real towns or villages anymore, but just continual suburban sprawl which blend into everything as one great mass, there are spate Italian towns and villages. This one she teaches at has 1,100 people, three churches, a Cistercian monastery, and her own convent school. Mass attendance is about 20% which is ashame. But at the one Church which also offers the Tridentine Latin Mass, attendance at that one Mass is always packed to the doors and out onto the step!
The Cistercian monastery used to have 40 monks, before VaticanII (Casamari Congregation of Cistercian monks.)But now they have only 12. Her own convent school has 14 sisters (21 before Vatican II), and a good enrollment which basically has not changed ince before Vatican II (130 boys an girls of the village and the surrounding little farms, etc).
But the point is that, as there are rumblings of discontent among the Italian bishops regarding Pope Francis and his people, and in Poland, and other countries, including among many bishops here in the USA, people of the village likewise are very unconfortable about this Pope. A good 85% of the people actually dislike him.....but they loved Benedict XVI and of course, JP II. Many still have memories of Pius XII, and there are still portraits of him in churches,houses, and in my friends convent.
The town is about 15 miles from Castel Gandolfo, which is further down from Rome. There, the people actually hate Pope Francis....literally.
So the disquiet isn't just among bishops. In Italy, Poland and elsewhere...the people actually hate him.
Most of the crowds he's getting in Poland are for the Wolrd Youth Day anyway, not the locals as much as before.
Maybe the bad fall Francis took at the Shrine of Our Lady of Czechtowa was a sign that not only is the Lord and the Blessed Virgin not pleases with this man....but that his days as Pope are almost over. There were some commentators who took his tumble at the Shrine as an omen. As well as the pouring rain.
Damian Malliapalli
Damian Malliapalli

I find it is really hard to make comment about that fall, but one wonders.