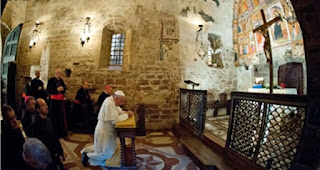 (Rome) Pope Francis will visit the Portiuncula Chapel in Assisi this coming August 4th. This is how the chapel of Santa Maria degli Angeli is popularly known in the plain below Assisi. The occasion of the papal visit is the 800th anniversary of the granting of so-called Portiuncula indulgence by Pope Honorius III. in 1216.
The Portiuncula indulgence, the so-called "Forgiveness of Assisi", can be received by visiting the chapel in Assisi or in the world by visiting a Franciscan church. The expansion of  indulgences had been granted in 1480 by Pope Sixtus IV.. In addition to this condition, the usual conditions apply for obtaining a plenary indulgence.
Any baptized Christian who is not excommunicated and is not  in the state of grave sin at the time of receiving the Indulgence, will win it if he's disposed and within the prescribed time and in the manner provided by the Church, meets the five conditions:
The fifth condition is to visit the Portiuncula or another Franciscan church.

Portiuncula dates back to the 4th century

The Chapel of Our Lady of the Angels was built in the 4th century by hermits and passed in the 6th century to the possession of St. Benedict of Nursia. Saint Francis of Assisi again rebuilt the dilapidated chapel early in the 13th century. For a basket of fish as a payment of interest, it was rented to him  by the abbot of the Benedictine monastery of Monte Subasio.

In his last six years of life, St. Francis of Assisi, from whom all Franciscan orders go back, meanwhile called a meeting of the Friars Minor at Pentecost at the chapel. He died in the chapel on October 3, 1226.
In 16/17th  century the Basilica of Santa Marta degli Ageli was built at the behest of Pope Saint Pius V around the chapel, one of the largest churches of Christendom.
Pope Francis will visit the chapel in connection with the Jubilee of mercy as a "simple pilgrim," as Vatican Radio reported.
According to tradition, the Benedictine monastery of Monte Subasio, which presented the Portiuncula to St. Francis of Assisi, goes back to St. Benedict of Nursia. The oldest surviving document dates from 1051.  An excavated crypt reveals the existence of a community of monks from the 7/8th centuruies.
In 1860 the monastery, like all monasteries in Italy,  was abolished, falling victim to the new, Masonic Kingdom Italy. Only in 1945 were the remains of the Abbey in Assisi taken over again by the Benedictines of St. Peter  and partly rebuilt. Due to severe damage from the earthquake of 1997, it had to be abandoned again by the monks. Restoration works are underway.
Subiaso is the house mountain of Assisi. The monastery dominates the town and the valley.
Text: Giuseppe Nardi
Image: RV / Wikicommons (Screenshot)
Trans: Tancred vekron99@hotmail.com
Link to Katholisches...
AMDG
Posted by Tancred at 1:01 PM

The Manual of Indulgences (4th ed., 1999) actually grants the Plenary Indulgence (under the usual conditions) not just for visiting a Franciscan church on 2 August, but for visiting any minor basilica, cathedral church or parish church on that date, and devoutly reciting an Our Father and the Creed:

It's the Portiuncula Indulgence, but thanks for your help.

Will he be placing a Buddha on the tabernacle?

it will burst into flames at his first footfall.

The Chapel of Saint Francis Xavier is located just opposite the legendary Eduardo Marques Square in Coloane, some 30 kms from Macau.