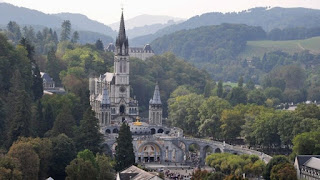 (Paris) She was born deaf. This past May 11 shortly before 20:30 she took off her prosthesis and said to her mother: "I no longer need this. I hear now." We're talking about a little girl who was staying with her mother, her grandmother and her brother on pilgrimage in Lourdes.
"The girl was born prematurely on December 25 of 2009. To save her, her doctors administered the drugs that damaged her hearing organs. In Gaslini Hospital of Genoa their own prostheses were used as hearing devices had no effect on her. With the help of speech therapy she learned in the course of time to read lips and speak with difficulty. Her story was told Giuseppe Secondi, the Unitalsi conductor of Milan West, who led the pilgrimage with the girl. Unitalsi is an ecclesial service, the Ambulance service operates at  Lourdes and other international as well as Italian sanctuaries.
As a gift to her family, the mother decided to make a thanksgiving pilgrimage to Our Lady at Lourdes with the children, which included her own mother.
The pilgrimage took place in the usual way. Prayer, Holy Mass, dipping into the wells. On the evening of May 11, "we returned after the conclusion of the Eucharistic procession to the hotel," said the mother. "I was playing a bit with the kids, then I wanted to go to the meeting of the pilgrims who are first time attendees on a pilgrimage to Lourdes. When I told my daughter that I would go away but be inevitably long, she suddenly said in a clear voice, as she had never spoken before, that I should stay."
During the meeting pilgrim pilgrimage conductor Secondi was called. He was told that the girl had taken her hearing prosthesis out and told the mother that she no longer need it, because she could now hear.
"We stood in disbelief in front of her. From an adjoining room we called her several times with a soft voice and have found that she could really hear us.  Above all, she now speaks very clearly, very different than before."

"I thank you, dear Mother, for what you have done to me"

The next morning Secondi wanted to apply to the Bureau des Constatations Medicales to report the case. Previously, he had accompanied the girl to the grotto. While they were there, he said to the child: "Let's go to my Madonna, mine has a crown on her head."  So we went to the great Lady of Lourdes, crowned statue of Our Lady. As we stood in front of her, the girl said to my astonishment: "I thank you, dear Mother, for what you have done to me."
Then we went to the Bureau des Constatations Medicales. In the waiting room there was a stylized representation of Marie. The girl said: "this is ugly."  When we came into the doctor's room, a picture of the Blessed Mother crowned was hung: "This is the Madonna," she said with satisfaction.
The doctors examined her in detail, then the mother. They performed listening tests. Investigations have since continued in Italy and are still underway. Doctors in Genoa have presented to their astonishment, a cure of the hearing organs. There was also a change in character that took place. The previously very closed, introverted, girl has now become wholly different.
In Lourdes one proceeds with caution and accurate investigations are necessary before a miracle is recognized. The surveys will therefore take some time to complete. The girl and the family are certainly happy and grateful.
Text: Giuseppe Nardi
Image: Wikicommons
Trans: Tancred vekron99@hotmail.com
Link to Katholisches...
AMDG

Email ThisBlogThis!Share to TwitterShare to FacebookShare to Pinterest
Labels: MIracles, Our Lady of Lourdes, Pilgrimage

How happy and grateful I am to read such a wonderful story.

What a great miracle for the young girl and her family. Very uplifting to read this account.

Nice news for a change!

The Eternal Father is merciful!

God works many miracles through the Virgin Mary!

I'm an American who made a pilgrimage to Lourdes in 2011. I had suffered from ulcerative colitis for over 20 years since the age of 18. I was in a flare up while in France just from the stress of travel, etc. I did not ask to be healed at Lourdes but I was. After that trip, my rigid, strictly limited diet was over. Years of anguish about the disease, gone, washed away. It won't be documented or proven by a medical board but it is true, it happened. As an unworthy recipient of this gift I can only testify about it and recommend others to have faith in our Lady's help.

Thank you Our Blessed Mother for showing the world again your beautiful, compassionate, loving, Immaculate Heart!!!

Thank you so much Mother Mary for your awesome, beautiful and powerful intercession!!!