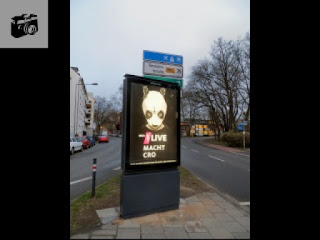 An inverted cross is on the Panda mask of rapper Cro, with the WDR advertising for the music channel "1-live".

Cologne (kath.net) An inverted cross is on the Panda mask of rapper Cro, with the WDR [West Deutscher Rundfunk is a radio broadcaster.] advertisement for its music channel "1-live." The advertising has been seed frequently in the Cologne area in March. A reader wrote kath.net that he had felt the inverted cross to be an aggressive anti-Christian symbol. Also the reader explained  that he had the writen WDR, the GEZ Agency and the Catholic and Protestant churches of Cologne  with a request for comments, but they had not answered him.

The musician has been wearing panda masks for years as a trademark. Then the inverted crosses are partly for at times more subtle, partly more powerful presentation. Mostly he uses masks without inverted cross, the WDR would therefore also have available imagery, that would not have been offensive to Christians.

The musician has already been criticized several times over the years on the inverted cross. The characters look "so cool," he said at one point. To the "Frankfurter Allgemeine Zeitung" he explained in an interview in 2012: "This is completely pointless and has no meaning at all. Initially, the mask was so empty, then there was a thick black  pen and now the cross is there." Two years later, he explained at the Openair Festival Frauenfeld. "I was at a party and we were all drunk and in the morning I woke up and had a cross on my forehead," as he pointed to the inverted cross on his Panda mask.

In Christian culture the inverted cross is often a sign of negation of Christianity or as a satanic symbol.

See also the article on the WDR site.

Email ThisBlogThis!Share to TwitterShare to FacebookShare to Pinterest
Labels: Zeitgeist

I would make it known that an inverted cross is also a sign for Saint Peter's upside down crucifixion. Spread the rumor that panda face is a pope lover. That'll fix him.

I once accidentally an anti-Catholic antichrist Protestant's website. He had a large photo of the Polish pope sitting on a large wooden chair. The pope was leaning forward and behind him could be seen a small, carved inverted cross. The heretic held that photo out as proof of the pope being the Antichrist. Poor stupid thing was so ignorant of the Christ he claimed to follow that he did not know that it was the symbol for Saint Peter's death and the fact that he was the first pope.

He must have spent much time scouring photos with a magnifying glass while trying to find evidence to support his hatred. What a LOSER!

Panda is the official-unofficial mascot of Climate changers. Watch the movie Kingsman you see posters and posters of Pandas in the background.

Speaking of anti-Catholicism. Max Keiser of the Keiser Report for the 2nd time mocked the Doctrine of Transubstantiation. Look for the April 1st show and send a complain to RT or the Catholic League.

If I could not perceive or gather enough people for a proper level of financial hurt to be put on a person who would persecute or insult Christians to try to be "cool", I would ignore it. Bashing God, Jesus, or Christians is hip these days, and it only gives them more juice and free publicity. Most cheesy entertainers today don't have enough talent to actually make a living on talent alone, they must find a hook or a way to be noticed. This too shall pass, when bashing God becomes boring and "already seen that", which has probably already happened. There is always the next level of shocking just around the corner as desperation creeps in for those who can't make it any other way.

An inverted cross is, in certain contexts, also a symbol of St. Peter, since tradition has it that he was crucified upside-down (see for example the upside-down cross that adorns the altar at the Mamertine prison in Rome). However, I doubt that such an allusion is what this "artist" had in mind.

Cool! A new vestment for the German Bishops! I am sure they'll hatch a suitable new well-choreographed ritual.