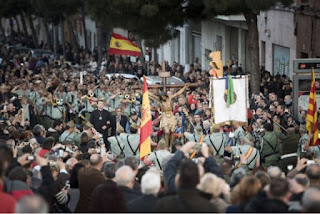 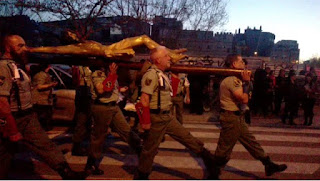 Regardless what sort of reputation the Legions had with the mayor, was "the presence of legionaries in the procession" really the primary reason he banned them?

This following the blasphemous and disgraceful Barcelona award (see link below).

The Spanish Constitution say that you are free to show your faith.
Attacks against religious feeling are increasing in Spain. We are starting to organize to defend our faith against those who wants to implant atheism in Spain. Once in the 30´s they tried (Stalinism) and the result was the civil war (1936-1939).

They tried to implant Stalinism. They were guilty of the most important persecution against Catholic people. The assassination of at least 11000 people belonging to the Church (clergies, religious and laics).
1500 people, have been beatificated and some of them, canonized. The rest, 9500 are open causes to be studied.

I think that it's proper name is the Spanish Legion now. It is still an elite unit within the Spanish armed forces.

Thanks God there's something Catholic even in Barcelona, the spanish city with more than 200 lodges. Viva Espana Catolica.

If those in the grasp of the enemy continue to wield power, it is possible to again see the blood of martyrs flow again in Spain....and elsewhere as it is already happening under islam.

Personally, I am not a big fan of the idea of "religious freedom" by itself. Of course I think it scandalous that the government would stop a Holy Thursday procession.

But here in Brazil, we have several people who belong to pagan religions somewhat similar to spirit worship seen in parts of Africa, where mediums try to contact and be "ridden" by those spirits. Sometimes it is even mixed with ideas from Christianism, treating Jesus Christ himself and Our Lady as spirits to be bargained with.

I would think it proper and good if the government forbid such practices. At best, as far as I understand, these mediums are con men or simply delusional. At worst, they are actually bargaining with demons. Either way society would be better off if such things were forbidden.

But my point is that freedom of religion, by itself, isn't a good thing. I think catholics should be careful when dealing with this subject to avoid giving the wrong idea.

Spain was a Catholic nation with a Catholic constitution until Vatican II's Dignitatis Humanæ led them to believe "religious liberty" was Catholic and not Masonic. See, e.g., E. Michael Jones's most recent talk @11:25 and @14:46.

"At the SSPX service the Good Friday Prayer for the Conversion of the Jews would have been prayed, in its original form." Yes, the SSPX uses the 1956 Holy Week, which includes the old version (with "perfidious") of the prayer for the Jews.

Since we're on the subject of Holy Week, and the Luturgies, did anyone watch either the Holy Thursday or Good Friday ceremonies from the Vatican. During both the Mass of Holy Thursday and the ceremonies for Good Friday Pope Francis looked and sounded terrible. He limped badly, spoke in a weak voice and at times appeared breathless. He had no expression in his voice and his face was blank.
Now, given Bergoglios proclivities for distaining Catholic tradition, maybe he was just bored.....but he actually sounded not well. Anyone else notice it?
Also, I saw the clip from Good Friday procession at the Coliseum....lokks just from what I saw that a lot fewer came out for Francis there than did for Benedict XVI, or JPII in the last few years of his life .
Damian Malliapalli

I wish all a very happy Easter full of God's grace and blessings.

Yes it's true, a lot fewer, about 30% less, the same for the Jubilee, Rome is empty, no pilgrims at all. Holy Easter to all of you. God bless+

It's a wonderful ,very moving ceremony.

Did it include all 12 prophecies? If so, it's certainly pre-'55 Holy Week reforms.

Yeah, I wonder what Abp. Lefebvre's views on the '55 Holy Week reforms were. I'm sure he discussed them somewhere.

I say pre-51 since Pius XII made the first changes to Holy Week starting in 1951 W/Holy Saturday.